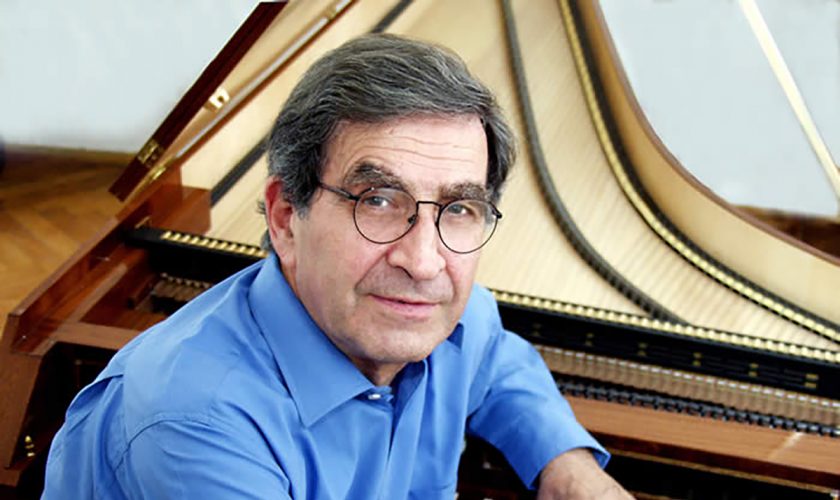 The fortepiano expert plays on pianos modeled after the instruments composers such as Haydn, Mozart and Beethoven were creating music for, revealing a different sound than what most people are used to hearing.

“Music is always composed for instruments,” said Bilson, a professor emeritus at Cornell University. “Operatic composers immediately changed the aria if a different singer came in, and the same thing is true of a composer like Beethoven. (He) changed his writing very much as these instruments changed.”

Bilson brought a replica of an 1812 piano to Chautauqua Institution, whose Piano Program exclusively uses Steinway pianos, to play at his recital at 4 p.m. Tuesday in Elizabeth S. Lenna Hall. He will also hold a master class at 2 p.m. Wednesday in Sherwood-Marsh Studios.

Bilson said there’s a tremendous variety of pianos, but American pianists have been “stuck” in the style of the Steinway piano of 1870s. The German company, working out of New York, put together a “certain kind of recipe” which Bilson said all pianos, regardless of type, are modeled after today.

Pianos, Bilson said, are much like computers — there’s something new created every five years and the ones built in London are completely different than those built in Vienna. Yet, in America, piano is still largely played solely on the 1870 Steinway style.

“In Europe … almost everybody plays on a variety of pianos,” Bilson said. “In this country, we’re sort of behind in a way.”

Bilson said there’s nothing wrong with using modern instruments, but by playing pieces on the fortepianos, pianists and audiences can hear familiar music in a new way.

The difference between the older pianos and their relatively modern counterparts has to do with the control over the length of the tone. The sound created from pianos comes from a hammer striking a string, “like hitting a bell.” The string will continue to vibrate as long as it can unless stopped by a damper.

Steinway pianos, Bilson said, have a longer tone compared to the earlier fortepianos. The long tone make Steinway pianos ideal for long lines, but poor for playing the fine inflection between notes — which composers like Mozart often call for in their pieces.

“Mozart writes all these little marks which show you exactly what to do with how the notes relate to each other,” Bilson said. “Most pianists just play over the whole thing smoothly because the modern piano wouldn’t do that well. It would sound like hiccups.”

Bilson said playing on only one style of piano, when a tremendous variety exist, is like someone who loves driving saying, “I only love Mercedes,” and refusing to touch anything else.

Even as a child, Bilson noticed there were other kinds of pianos to explore. It’s through the fortepiano that Bilson found his niche, but even he was hesitant when first introduced to the antiquated instrument almost 50 years ago.

“It was harder to play (than) the way I was used to playing,” Bilson said. “But I got used to it and realized the music comes out differently, and I thought this is something worthwhile. It’s important to think that you’re doing something worthwhile and making a contribution.”