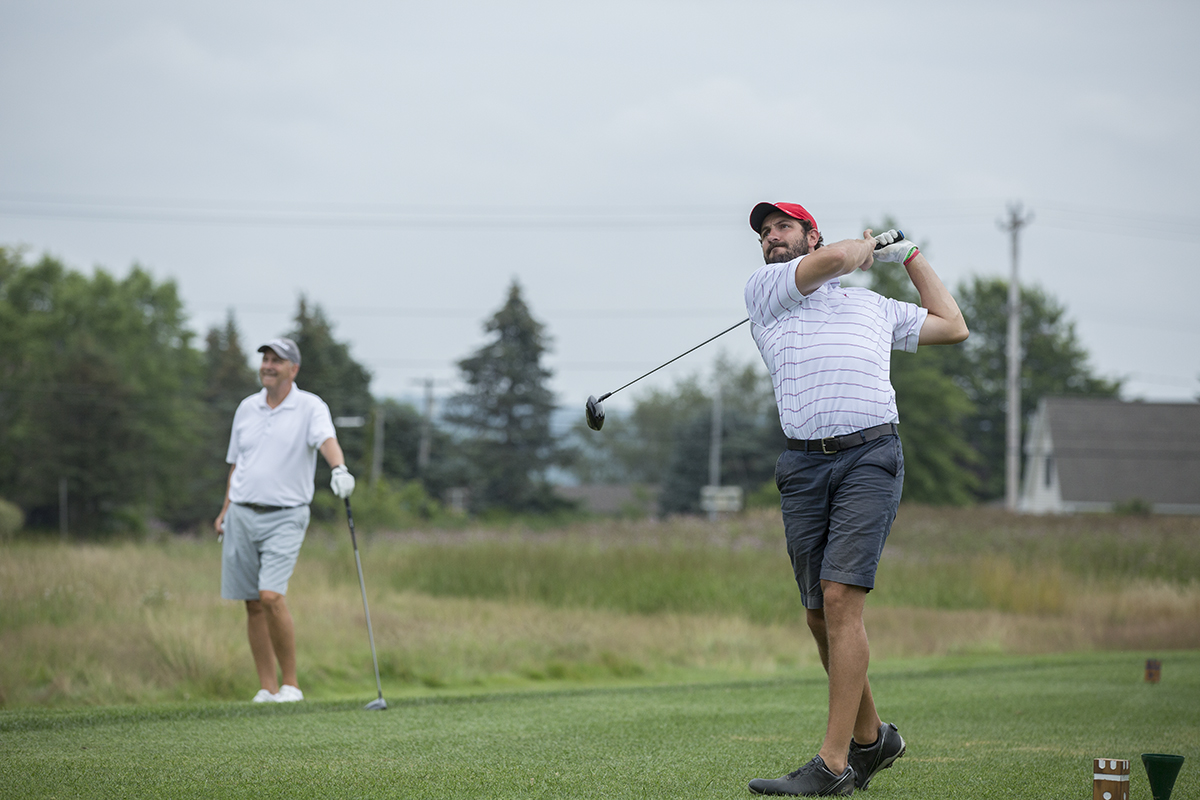 Ben McCauley tees off as his father, Jack McCauley, watches during the 2017 Member-Guest Golf Tournament at the Chautauqua Golf Club on Saturday, July 22, 2017. CAM BUKER/STAFF PHOTOGRAPHER

Despite being behind the lead group by three strokes after the first round of golf in the Men’s Member-Guest Tournament, Matt Cestari predicted that he and partner Shaun Fadale would win in a playoff. The next day, Cestari’s prediction came true.

“How crazy is that?” Fadale said.

Fadale and Cestari faced off against Jason Anderson and Jamie Paterniti in a two-hole, sudden-death playoff to determine a winner in the two-day, best-ball tournament on Saturday at the Chautauqua Golf Club.

The 59 on Saturday was the lowest score shot in the tournament overall. Anderson credits good teamwork to shooting 13-under par with his partner.

“We play well off each other,” Anderson said. “If I had a bad hole, Jamie would have a great hole, and vice versa.”

As to how the duo finished with the lowest score, Anderson also attributes hitting long putts.

Although they didn’t shoot the lowest score, Fadale and Cestari stepped up to the challenge after a good, but not leading, first round.

“We shot well the first day, but there were groups with lower scores,” Fadale said. “We knew we had to shoot the lights out to have a chance.”

Before the scores were announced, Cestari had confidence that he and Fadale performed well.

“I thought we won,” Cestari said.

As the duos gathered around the Double Eagle Café to see the final scores, excitement began to spread as golfers saw 123 on two different final scorecards.

Once it was confirmed a playoff had to be organized, participants followed in a sea of golf carts. They drove through the grass and scattered in different directions, all intrigued by who would win the tournament.

A net-birdie on the second sudden-death hole sealed the deal for Fadale and Cestari.

Head golf pro Troy Moss said there hadn’t been a playoff for first place in the tournament for a few years, making the experience interesting to all.

“That’s the fun part of a playoff,” Moss said. “Everyone’s been playing all day so no one’s watched anyone, but in a playoff, everyone wants to watch and root for each other. It creates excitement and excitement’s good for tournaments.”

After the tournament, Fadale and Cestari celebrated by inviting Anderson and Paterniti to have a few beers and hang out.

Fadale, a 10-year member at the golf club, looks forward to the event every year, but is excited to get his name on the 100-year-old plaque that commemorates the tournament.

“None of us are professionals, so this is the closest we’ll get to that feeling,” Fadale said. “Now we’re etched into history.”