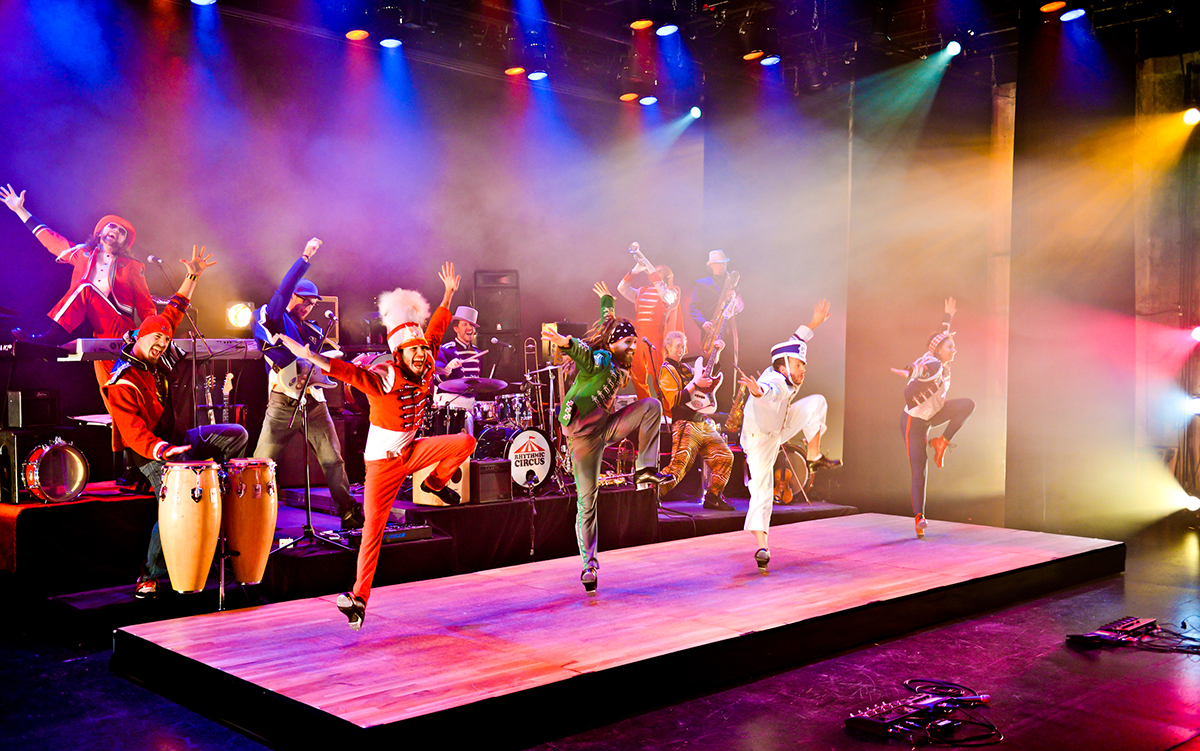 The artist-owned collective of hoofers and musicians will perform their signature show, “Feet Don’t Fail Me Now!,” at 7:30 p.m. Wednesday in the Amphitheater as part of the Family Entertainment Series. Expect funky costumes, a big brass band and, of course, lots of tap shoes in a show fit for all ages.

“The overall general message is that anything is possible if you believe and put your heart into it, and I think that our group is an example of that,” said Rhythmic Circus co-creator and executive director Nick Bowman. “We’re friends who wanted to get together and create something.”

The multi-member percussive dance and musical ensemble officially formed in 2007, but the troupe’s core members have been choreographing and performing together since 2000. “Feet Don’t Fail Me Now!” played for an extended run in New York City in fall 2013, and the group has been touring nationally and internationally since.

The name of the show comes from an old New Orleans chant dating back to the early 1900s, Bowman said. The show is meant to remind audiences there’s “always a reason to get up, let go and dance.”

“When we first adopted it as a show title, it was really trying to encompass that rallying cry of ‘Let’s do this,’ ” Bowman said.

“Feet Don’t Fail Me Now!” premiered in August 2008 at the Ritz Theatre in Minneapolis. The resulting show featured “rapid-fire tap dancing” and a variety of musical genres, from blues to jazz and rock ’n’ roll.

Since then, the show has been fine-tuned and changed, Bowman said, in an effort to keep the performance exciting for dancers and audience members alike. The show includes moments of ensemble work, as well as times when individual performers have the spotlight.

Over the years, Rhythmic Circus’ artistic roster has grown to include 25 artists, with members rotating in based on schedule. In several reviews of the show, beatboxer Aaron “Heatbox” Heaton has been singled out as a performer to watch.

“Heaton’s innovative beatboxing adds an extra layer of rhythmic enthusiasm,” Tony Lacy-Thompson wrote in a recent review of a Rhythmic Circus performance in Palo Alto, California, for the Mercury News. “When beatboxing started in the 1980s, it was just imitating drum sounds, but Heaton — who has opened for top-class acts such as Cee-Lo and George Clinton — is one of the best of the new generation of beatboxers.”

The Rhythmic Circus performers share a long history with of performing with each other. The dancers first met as youngsters in the Twin Cities’ dance competition scene. Similarly, the band’s core musicians were on the same elementary school bus route.

The core dancers first noticed the musicians who would one day join the group at the 1998 Minnesota State Fair Amateur Talent Competition. Other band members joined after meeting during the group’s college years.

Rhythmic Circus’ theatrical style of blending dance with music and story has brought comparisons to Blue Man Group, Stomp and Riverdance. In addition to gaining attention through performances at such venues as the Kennedy Center, Rhythmic Circus also found the national spotlight by appearing on the reality TV competition show “America’s Got Talent” in 2015.

“Feet Don’t Fail Me Now!” has received positive reviews and awards, including a Spirit of the Fringe Award — Edinburgh Festival Fringe’s top theatrical award — in 2012. At the time, arts journalist Kelly Apter wrote in a review for The Scotsman that everything in the show arrived “with a bang” – from the dancers to the musicians.

“This loud and lively coming-together of musicians and dancers is unusual in that nobody has top billing,” Apter wrote. “Every cog in this wheel is just as important, and is given the chance to show what they’re made of.”

Hot Chauts get past Belles in Chautauqua Women’s softball league