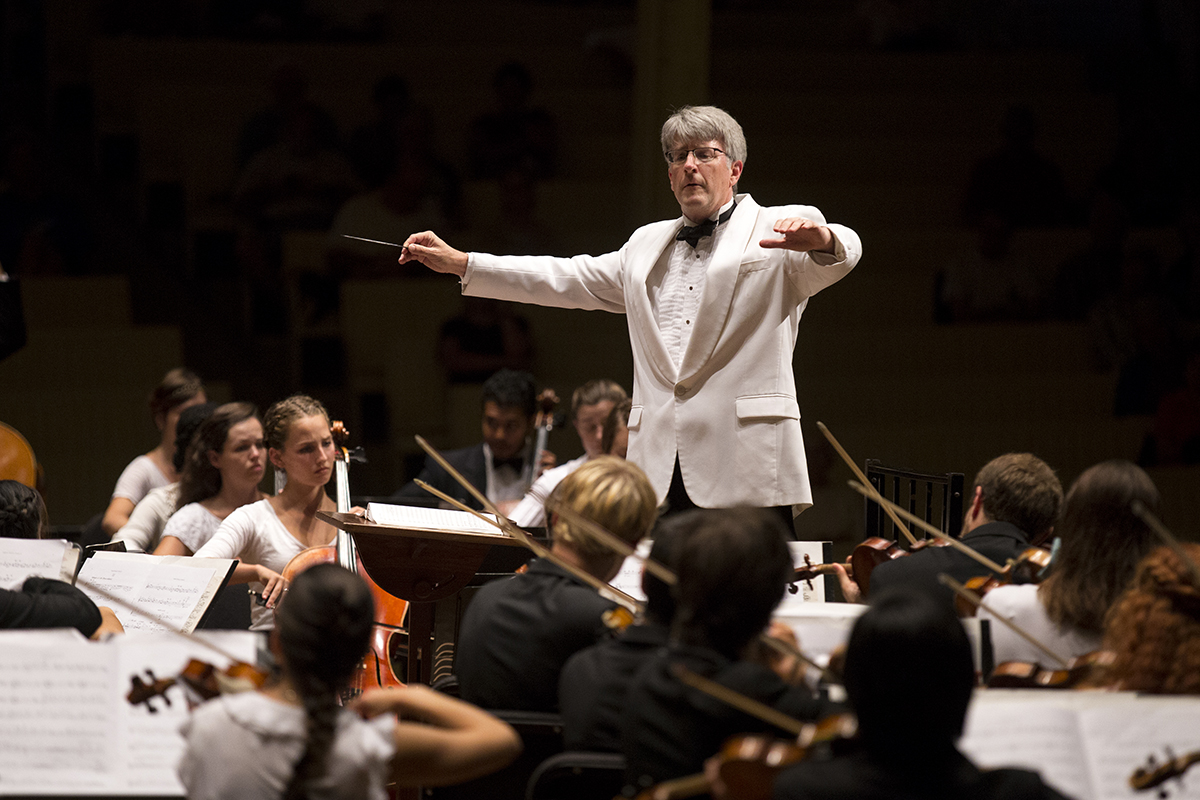 Most of the musicians in the Music School Festival Orchestra didn’t even know one another’s names a week ago.

“This orchestra’s never existed before,” said Timothy Muffitt, Music School Festival Orchestra conductor. “We’re bringing 80-plus people together and trying to make them one.”

Now, they’re ready to perform as a cohesive group. The MSFO will open its performance at 8:15 p.m. Monday in the Amphitheater with Joseph Haydn’s Symphony No. 97 — a selection Muffitt said he made not only because it’s extraordinary music, but also because it’s able to bring an orchestra together quickly.

“I always begin every season with a classical-era symphony. … It’s a great project to develop ensemble skills and to let the players get to know each other as musicians,” Muffitt said. “The classical style is very good for that.”

Under Muffitt’s guidance, the young artists are embracing the challenge of blending their sound and channeling their nerves into enthusiasm.

“It’s exciting because everyone has to mesh together very fast,” said Sophie Pariot, a violinist spending her first summer with the MSFO.

“It can be hard at times, but I think we’re going to pull it together and it’s going to be a great first concert.”

The last piece the MSFO will perform tonight is Igor Stravinsky’s “Firebird Suite,” which Muffitt calls a “centerpiece of a standard repertoire.” Muffitt said the piece will help the students come together as a symphony orchestra.

In addition to their technical mastery, the 85 young musicians bring an air of youthful energy to the stage, which is one reason Muffitt said makes them especially joyful to work with and listen to.

“There’s a great combination here of extraordinary talent and passion for making music,” he said. “For many of them, they’re playing some of these pieces for the first time, and so there’s that freshness element of it. They’re a very malleable group, in that we can achieve a lot … and (are) able to explore some great expressive options.”

Muffitt is using the group’s flexibility to expose the audience to a concert that spans centuries of music and styles. They’ll hear everything from Haydn, which Muffitt said is the “foundation of all orchestral music,” to a piece written just a few years ago.

“It’s a broad spectrum of style and the audience will hear this great orchestra going at all three of them,” Muffitt said.

Between the Haydn and Stravinsky, the MSFO will play a recent piece by Bruce Stark. The piece, “Symphonic Dances,” is based on popular American music, which Muffitt said will be evident to the audience right away. The MSFO is the second orchestra to be performing the “light and joyous” piece, which premiered in October by the Baton Rouge Symphony; an opportunity the young musicians are ready for.

“It’s great experience to walk into a new orchestra that’s ready to go,” said Anna Berntston, a violinist spending her first summer with the MSFO. “Everyone here is so talented. Of course the first rehearsal is always sort of a jumble, but things are coming together quickly and it’s just a joy to work with so many talented players.”

The young artists are grateful for the platform Chautauqua Institution gives them to do what they love most: perform.

“It’s a special place where people really care about the arts,” said Liaht Slobodkin, a returning violinist. “It feels like coming home.”