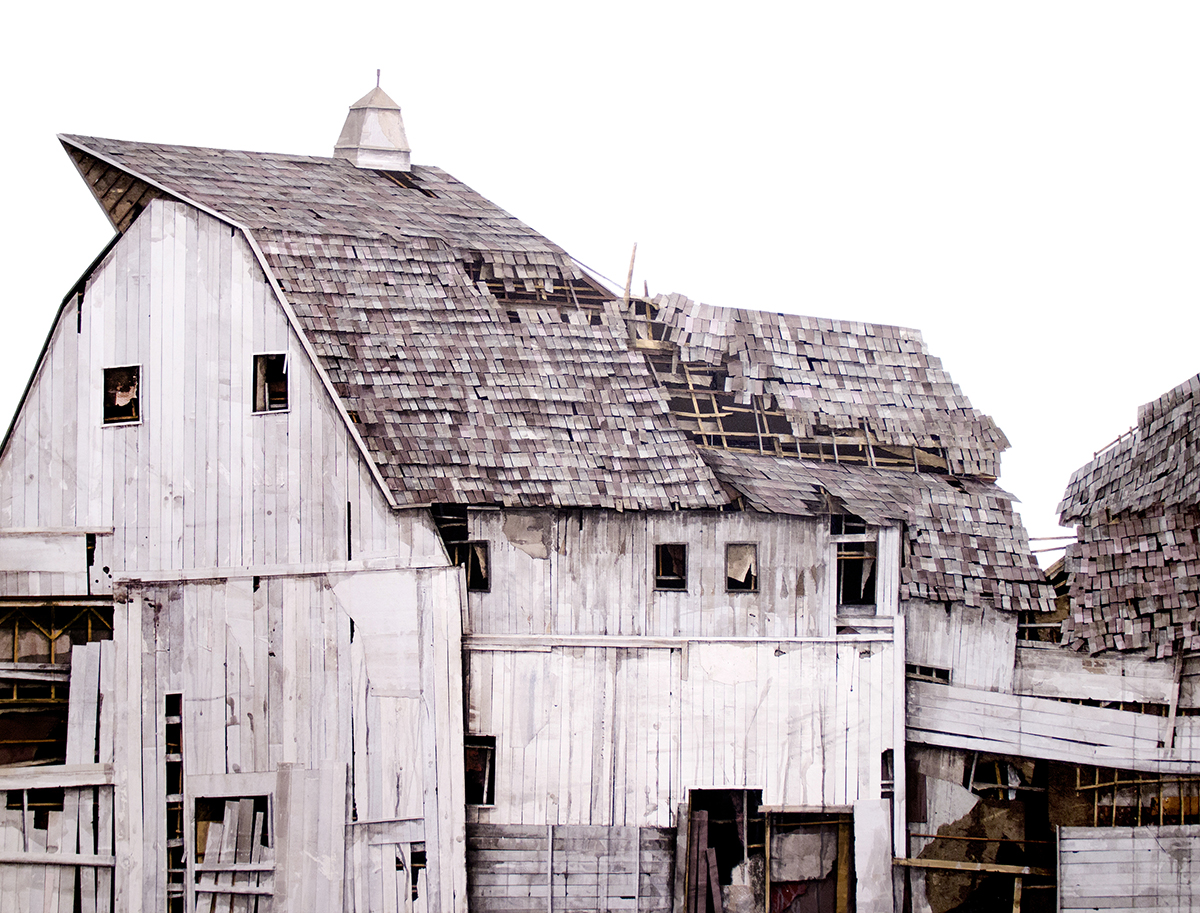 Three years ago, his work was featured in the Visual Arts at Chautauqua Institution show “Homeward Bound: An American Pictoral.” Guest critic Howard Halle wrote that Clark’s art examined “ruins from the present, picturing buildings and details of walls left wrecked and ravaged by disaster or neglect. Exposed, collapsing frameworks and sagging expanses of drywall mark the spots on a map that chart the emotional fallout from such places as post-Katrina New Orleans or post-crash Detroit.”

Clark’s new solo show, “Barnscapes,” will have its opening reception from 3 to 5 p.m. Wednesday in the Bellowe Family Gallery of Strohl Art Center. In it, Clark’s collage and sculpture pieces focus again on “ruins of the present,” only now their concern is rural rather than urban.

Clark, who grew up in Seekonk, Massachusetts, has long been interested in deteriorating architecture, including that of rural places. His own hometown area was once mostly farmland.

It’s out in that Americana landscape that Clark has seen so many dilapidated farm buildings, examples of “profound, beautiful architecture,” he said. Attempting to preserve the history of these buildings, Clark said, lends his work a “definite seriousness.”

“But I think a lot of people find beauty in it as well,” he said. “Buildings go through a process of decay much like we do as humans and so, I think I certainly look at them as sad but also, I guess I find it a little comforting as well.”

For “Barnscapes,” Clark created both collage and sculpture pieces. The collages are a mixture of store-bought paper and found paper scraps. Clark uses paper in plain, solid colors and glues it down strip by strip, also incorporating charcoal, pastel, acrylic and graphite. The sculptures, a few that represent upside-down barn rooftops and another in the shape of a silo, are built from balsa and basswood.

For both collages and sculptures, Clark works from photographs. He takes some photos himself, but fans of his work also send pictures of buildings that remind them of his collage. Clark uses these photos as references, sometimes combining several into a digital collage, like a rough sketch before he begins the actual piece.

For these digital rough drafts, Clark’s design background comes in handy. He earned his B.F.A. in graphic design from the Rhode Island School of Design and worked for several years as a designer in Pittsburgh. It wasn’t until about three years ago that art became Clark’s full-time job.

“I think I always wanted to be an artist,” he said. “I was getting off the computer and using my hands as much as I could with design, but it was never enough, so I was always producing art and trying to have exhibitions.”

Delving into art just made sense. In addition to doing his own work, Clark is a studio director for the nonprofit Radiant Hall, which provides affordable studio space for artists. Several artists with studio spaces there, like Nicole Renee Ryan and Gavin Benjamin, have also had their work shown at Chautauqua. That’s where Clark’s studio is as well – and it’s only fitting that Radiant Hall, in Pittsburgh’s Lawrenceville neighborhood, is a repurposed building. Formerly a Polish social hall, the building was constructed in the 1930s.

Clark would like to see more renovation and repurposing of old architecture, since there’s such an “overwhelming” number of buildings in need of repair.

“Even in a city, I think it feels even more overwhelming, where you have all this big and abandoned property, and you have a lot of people who are homeless,” he said. “There’s so much renovation and new money coming into the city, and they’re just tearing down houses rather than trying to preserve the old architecture and what was here, sort of putting up cookie-cutter condos and apartments all over the place.”

One bright side to the sheer number of buildings in disrepair could be that Clark won’t run out of inspiration any time soon.

“I’ve been working with this subject matter for so long and still haven’t gotten bored of it,” he said. “There’s certainly a lot to draw from, wherever I go.”

Jared Jacobsen to honor Scandinavian composer on the Massey Organ