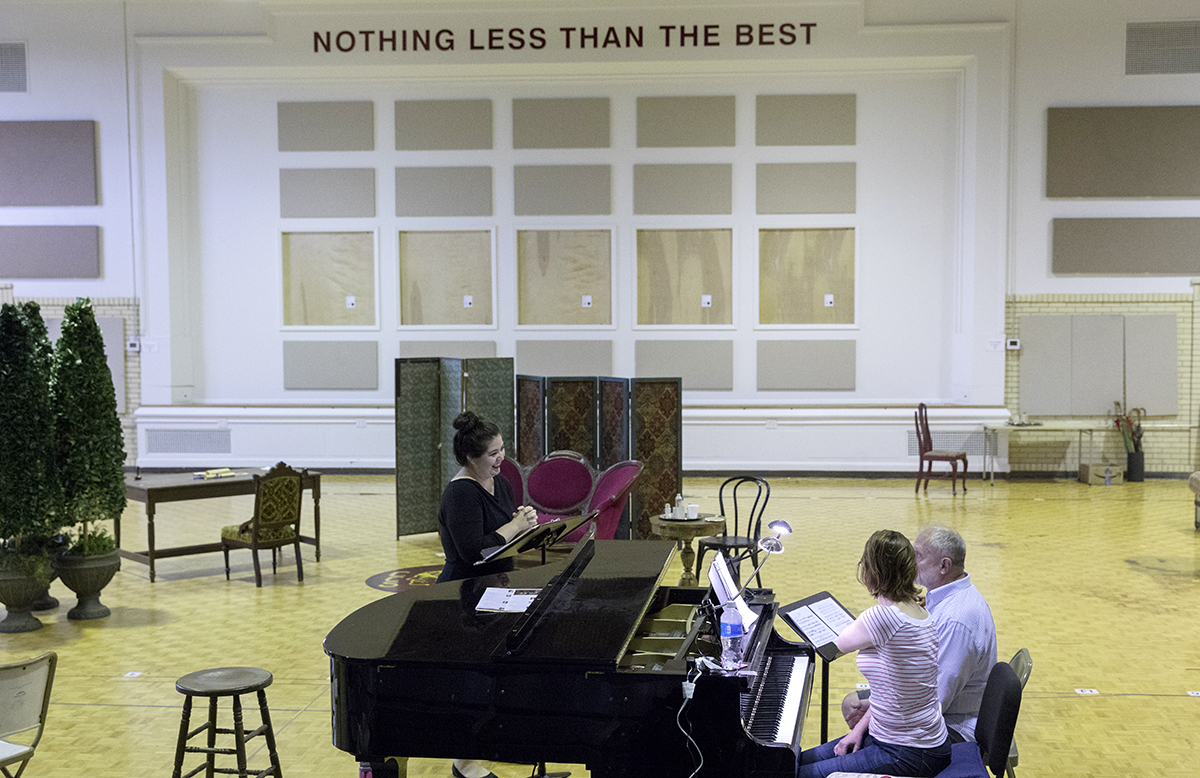 Like the music he adores, it’s a reminder that no matter how far a river travels, all of its water comes from the same source.

At 10 p.m. Wednesday in the Athenaeum Hotel Parlor, members of the Chautauqua Opera Company’s Young Artist program will present an open mic concert. The Young Artists performing in the casual event have spent the past week working with Wedow, who has educated and coached them in what he knows best: Baroque music.

“What I’ve been telling the Young Artists here is that, whatever style of music you’re going to end up singing, its feet, its roots are in Baroque music,” Wedow said.

Wedow himself became attracted to Baroque music almost as an afterthought.

Born and raised in a small town in Indiana, Wedow (pronounced way-doh) comes from a musical family. Both of his parents played instruments and his father sang. But according to Wedow, it was his maternal grandfather who was the best musician in the family. A trumpet aficionado, his grandfather was also the reason for Wedow’s unique middle name.

As a teenager, Wedow’s grandfather — Carl R. Thor — moved to the United States alone. Thor was a descendent of a member of a special military regiment of the Swedish king. As an honor for serving in this regiment, the ancestor was bestowed with the surname Thor.

After settling in Chicago, Thor married, started a family, and eventually lost touch with his family back in Sweden. Not having any brothers to carry on the family name, Wedow’s mother decided to do so by giving Wedow the middle name of Thor.

When periodically prodded by his daughters, the elder Thor insisted that there wasn’t anyone left in Sweden, no friends, no family, no reason at all to reach out or visit. It turns out, the family with whom he had lost touch never stopped trying to find Thor.

Not long after her father passed away, Wedow’s mother received a letter from the Salvation Army Missing Persons program asking if she was related to Carl R. Thor. So when she was in her early 70s, Wedow’s mother, Wedow, and the rest of his family went to Sweden to meet a family they never knew they had.

“We met eight first cousins who looked exactly like (my mom),” Wedow said. “And I played (piano) in the church where my great-grandfather had been the organist.”

When he was young, Wedow started taking piano lessons from the church organist. He began playing in church performances as well as playing with his family.

“On Saturday nights, my parents had a huge stack of music from the ’40s and ’50s. I’d sight read it and they’d all get around and sing,” Wedow said. “What was constant in my playing growing up was playing for singers.”

When he went off to college at Indiana University, he continued to pursue music. However, the teacher with whom he was going to study couldn’t take him on, as he already had too many students. So he passed Wedow off to a colleague, a first-year teacher by the name of Jorge Bolet.

A piano virtuoso, Bolet accepted Wedow as a student. But according to Wedow, it became clear in relatively short order that he was never going to play piano at the level of his teacher.

“He knew I wasn’t ever going to be a virtuoso,” Wedow said. “Whenever I played, I had to work really hard and practice a lot. But I was a good musician.”

Wedow worked closely with Bolet and began playing with more and more singers. After one particular performance, a Spanish set, Bolet was the first to meet Wedow backstage. The teacher, a hulking man whom Wedow says was built like a linebacker, was ecstatic.

“He picked me up and he shook me and he said, ‘Why don’t you play piano like that when you play for me?’ ” Wedow said.

With that performance, Wedow felt like something clicked. He realized that he loved making music with people, but not so much on his own. From that point forward, he was certain that he wanted to be a collaborative pianist. He wanted to work with singers and other instrumentalists. He made that the focus of his career.

That focus, along with being a good musician, landed him a job with the the Handel and Haydn Society in Boston. H+H’s period-specific repertoire meant Wedow had to educate himself on the work of composers like Handel and Bach.

“I fell in love,” Wedow said of the Baroque composers and their music.

In Baroque, Wedow found fantastic source material that, according to him, informs every other kind of music.

He also found music that is incredibly passionate, composed by incredibly passionate people. Bach got into a fist fight with a bassoonist who, in Bach’s opinion, was not playing up to par. Handel was very nearly killed in a sword fight after he refused to relinquish the conductor’s seat to his harpsichordist.

Wedow has taken that passion he found in Baroque music and transferred it to his work. He uses it to inform his own direction and, most notably, the work he does with young singers and musicians. It’s a passion that sits very close to the surface.

“I’m going to cry now because I’m so grateful,” Wedow said about his own time as a student. “I was so stupid and I was so green and I had people who looked at that as an opportunity to enlighten me. That’s why I feel passionate about working with young singers.”

Composers Giuseppe Verdi and Gioachino Rossini have both said the way to learn something new is to look to the past. When he sits down with students, Wedow carries this belief with him. His love for Baroque music makes sure of it. But if, by chance, he ever forgets it, he need not look any further than his own name.

There, tucked in the middle, Gary Thor Wedow will always be able to find what, for him, is the source of it all.