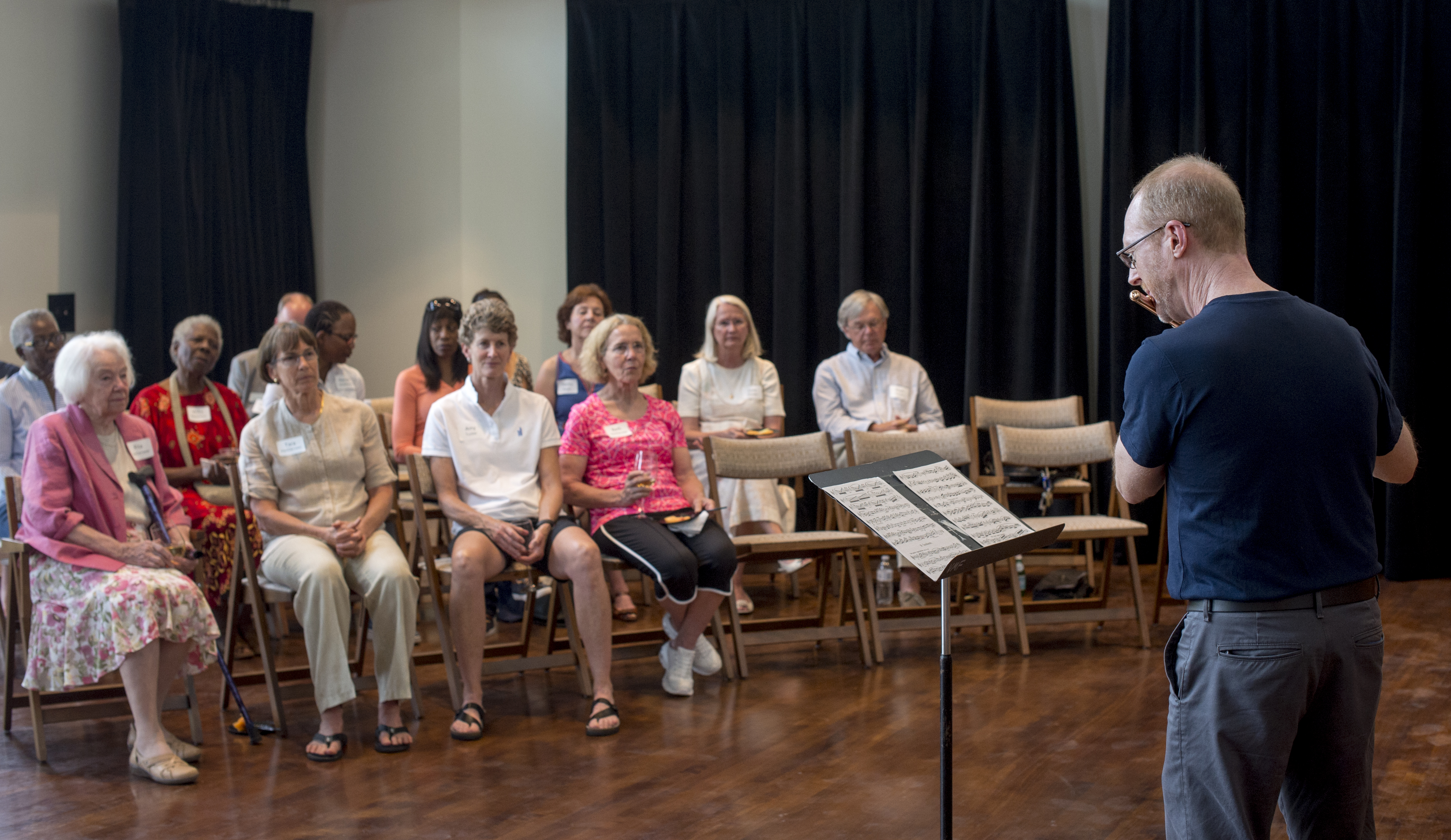 Tara VanDerveer started playing the flute in fourth grade. Although she loved it, she quit after a teacher would force her to play until her stomach hurt.

“I loved the flute, but I would never play it again,” VanDerveer said.

VanDerveer is the Setsuko Ishiyama Director of Women’s Basketball at Stanford University and has been coming to Chautauqua Institution every summer since she was 9. Despite giving up the flute, music has always been a big part of VanDerveer’s life, thanks in part to the support and example set by her parents.

As avid patrons of the arts, Rita and the late Dunbar VanDerveer first came to Chautauqua in 1962. Fifty-five years later, Rita VanDerveer can still be found in the front row at the Chautauqua Symphony Orchestra’s concerts.

For this love of the orchestra, of Chautauqua and in honor of her mother’s upcoming 90th birthday, Tara VanDerveer has endowed the Rita and Dunbar VanDerveer Symphony Principal Chair for Flute. On July 6, an intimate reception to celebrate this gift was held in the Tom and Jane Becker Room in the Amphitheater’s Hagen Center.

“I love the flute (and) I love Chautauqua,” Tara VanDerveer said. “I think it’s really important to give back and support the things that are important (to us).”

The fund was named in honor of both her parents and will support the principal chair for flute for the Chautauqua Symphony Orchestra. This position is currently held by Richard Sherman, who holds the longest tenure of principal flutist in the history of the CSO.

“For this to be the capstone of my career means the world,” Sherman said.

Sherman was a student at Chautauqua in the late ’70s and has been a member of the CSO since 1989. He is also currently a professor of flute at the Michigan State University College of Music.

“Rick is not just a leader … in (the) orchestra,” said Deborah Sunya Moore, vice president and director of programming at the Institution. “(He is an) artistic leader for Chautauqua.”

At the reception, Moore thanked the VanDerveers on behalf of the whole CSO and explained how their gift is important, not just for the arts at Chautauqua, but for the Institution’s vision as a whole.

“We don’t have much of this in the CSO, and the CSO is the musical heartbeat of the Institution,” Moore said. “People haven’t been aware that this is possible; our hope is that this is one of the gifts that will keep on giving. (We) hope it will inspire gifts (from) others.”

Geof Follansbee, vice president of development and CEO of the Chautauqua Foundation, said VanDerveer’s gift is special because of the testimony it gives to the Institution’s investment in the arts.

“What we’re looking at is a lovely pleasure and tribute,” Follansbee said. “(It’s) a great example for others for what they can do.”

For more information about establishing an endowment at Chautauqua, contact Dusty Nelson, director of gift planning, at 716-357-6409 or foundation@ciweb.org.