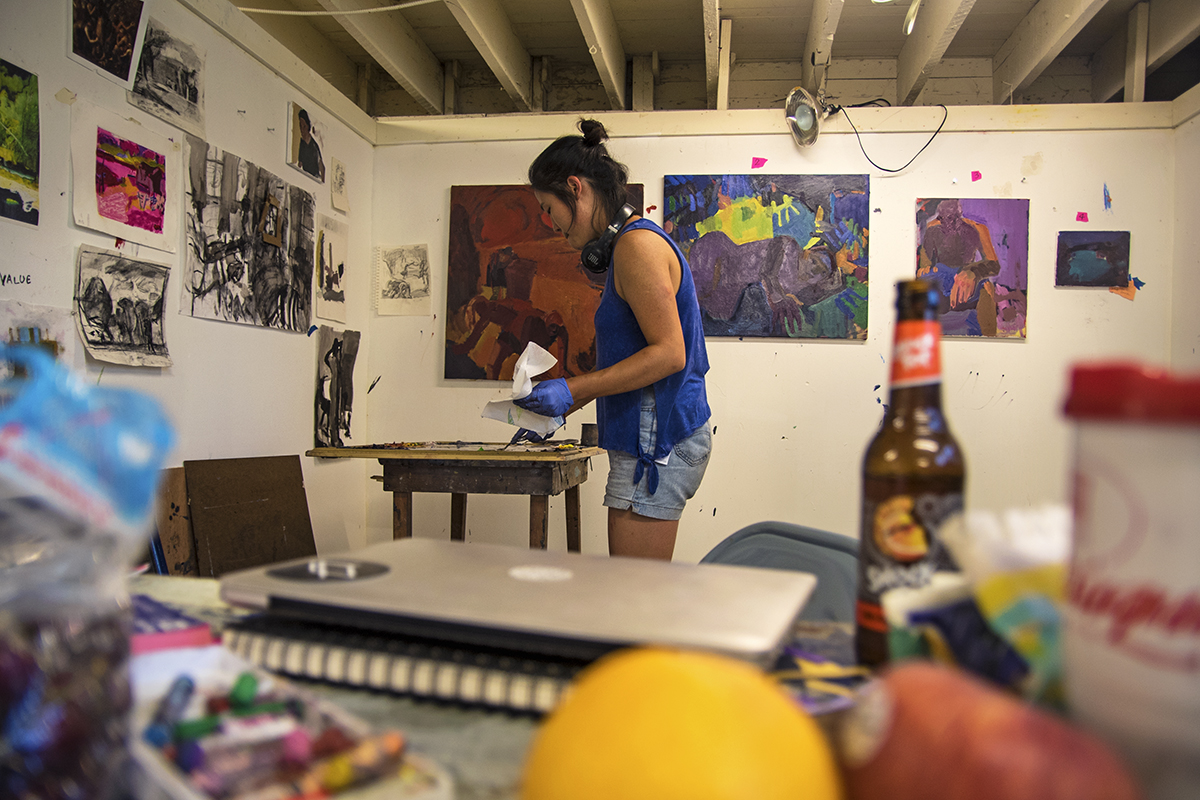 Mona Shen scrapes oil paint off a canvas in her studio in the School of Visual Art on Wednesday, July 19. "Cleaning up is usually easier than the actual painting," Shin said. OLIVIA SUN/STAFF PHOTOGRAPHER

For artists, an exhibition is equivalent to an orchestra performing on the stage, said Don Kimes, artistic director of the Visual Arts at Chautauqua Institution.

The VACI School of Art Annual Student Exhibition holds it opening reception at 3 p.m. Sunday in Fowler-Kellogg Art Center. Through Aug. 3, the exhibition will showcase the work of the 39 students in the School of Art’s seven-week summer session.

According to Kimes, there’s usually a line waiting to go in for the opening of the most popular show of the summer.

“I think it has to do with the fact that Chautauquans really enjoy supporting students,” he said.

The show may include paintings, prints, drawing, sculpture, ceramics, digital media and mixed media. It all depends on what Kimes selected.

Students had only been at Chautauqua a few weeks when Kimes spent a few days visiting each student’s studio, putting pieces of blue tape on the pieces he chose for the show. He aimed for cohesiveness in his selections, but every student should have at least one work chosen.

Kimes said he’s always amazed that a hundred or so various pieces, done in multiple mediums and in different styles, can come together and make one exhibition.

Stephen Lucero, a student at the University of California, Davis who’s working on sculpture while studying at the School of Art, was curious as to how that blending would happen.

Students are ready to see what their peers have been up to.

“I’m excited to see everyone’s work. I think it’s going to be interesting,” said Thomas McBroom, a student working on earning his M.F.A. at the University of Arkansas.

McBroom, a painter, has been busy putting the final touches on several works. He admits that “this show did sneak up on me,” but it doesn’t mean students haven’t been putting in the time.

“I’m just working, all the time,” said Sara Mays, a ceramist who will begin an M.F.A. program at Clemson University in the fall.

This summer, she has been working on sculptural wall pieces and one large assemblage piece.

“Just being around other artists is my favorite thing,” she said. “Everyone’s able to get their own private space, but we’re not completely secluded from each other, and I like how we can just talk to people.”

“People have been working really hard,” said Misha Khokhlov, an M.F.A. student at the School of the Art Institute of Chicago.

Khokhlov works in sculpture, sound and video, and this summer has been working on an experimental instrument and an installation piece that incorporates two steel sheets acting as amplifiers for speakers.

“I’ve been popping in and out of other students’ studios and everyone’s really producing great work, just in the short amount of time we’ve been here,” he said.

On Thursday night, after Kimes had made selections, the students took their works to Fowler-Kellogg. On Friday and Saturday, Kimes arranged where pieces would go; the gallery staff helped hang paintings and display three-dimensional pieces. Details like labels will be handled on Saturday so that all’s ready for the rush when the show opens Sunday.

Visiting artists’ studios and choosing work is usually a two- or three-month process, and then setting a show takes a few weeks, Kimes said.

“And we do this in five days,” he said. “So it’s a race. And then the opening feels the same way. So many Chautauquans just love seeing the work. And it’s a great place to find some work for your home, really.”

All the pieces in the show are for sale. According to Kimes, the student show sells the most volume of pieces out of any in the season.

That isn’t to say sales are the main objective.

“I don’t want the notion of selling and exhibition to be their primary goal while they’re here at Chautauqua,” Kimes said. “Their primary goal here is to focus on what they’re doing in the studio.”

Phuong Nguyen, who earned her B.F.A. from the University of Virginia, is working on oil paintings while studying at the School of Art. It’s a place that “really encourages a sense of community,” she said, and offers students the opportunity to be “fearless.”

“The program itself is a chance to be able to experiment and explore things that you haven’t done before,” she said.

Art is a huge spectrum, Kimes said, and not all of it is sellable or about “making it work in the living room.”

Rather than having the exhibition at the end of the summer, where it might loom as an end goal, Kimes prefers to have the exhibition toward the middle of the season.

“It’s a wonderful thing for the students,” Kimes said. “But I want to keep their focus on art with a capital ‘A,’ not with a dollar sign.”

Regardless, “it always turns out to be a fabulous show,” Kimes said.