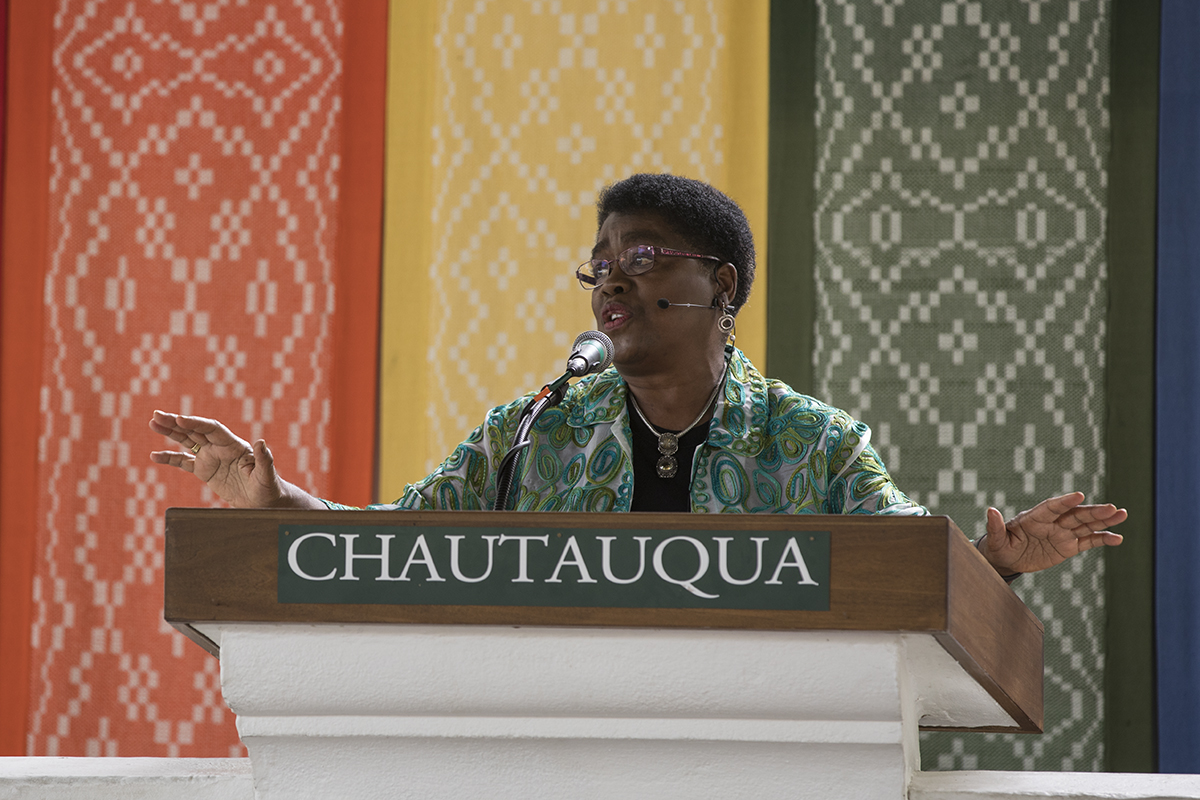 CEO of Skinner Leadership Institute Dr. Barbara Williams-Skinner delivers her lecture on "Racial Equality in America: Fiction or Fact?" on Thursday, July 6, 2017 in Hall of Philosophy. She focused on the greatest threat to our democracy and freedom. PAULA OSPINA / STAFF PHOTOGRAPHER

Ten years ago, Barbara Williams-Skinner and the Rev. Douglas Birdsall could not have spoken to an audience on the topic of race.

Williams-Skinner was too angry but has since, she said, received the grace of God. And Birdsall was “so uninformed and unconnected.”

But Williams-Skinner, the first female executive director of the Congressional Black Caucus, and Birdsall, the organizer of the Third Lausanne Congress on World Evangelization, were ready to talk as part of Week Two’s Interfaith Lecture theme, “The Genius and Soul of a Nation,” Thursday in the Hall of Philosophy, in their joint lecture “Racial Equality in America: Fiction or Fact?”

They were introduced to each other via a conference call of 60 religious leaders after the Charleston, South Carolina, Emanuel AME Church shooting in 2015.

Williams-Skinner said she used to be “one mother’s prayer away from joining the Black Panther Party,” but said, too, she was a “learner” just like everyone in the audience.

Her point: “The greatest threat to American freedom and democracy is not external.” She acknowledged that outside danger is real and can play a role in the pain of a nation, but she knows many of those as things of the past.

“I grew up in the age of Communism. That is not a threat anymore,” she said. “The attack on Pearl Harbor, the Cuban Missile Crisis … I remember as a little girl sitting in the bed and my mother saying, ‘We’re about to blow up as a world.’ But our nation is so resilient, so amazing, that we have been able to deal with all of those and other crises.”

So then, she said, even 150 years after the Civil War, there is still a great threat looming for Americans.

“It is the unresolved, unaddressed, unreconciled, unrepentant, unforgiven and unrestituted enslavement of human bodies for profit,” she said.

Slavery, Williams-Skinner said, left “lingering psychological damage” in people of all races. Referencing Martin Luther King’s “Letter from Birmingham Jail,” she said everyone is connected, a universal set of dominos.

“Let me say again that the very notion that skin color, biological pigmentation, a factor created by God and not by humans, is of greater value if it’s white than if it’s black, ought to trouble us greatly on the human scale as human people,” she said.

She referenced her Christianity too, mentioning the “core tenant of the Judeo-Christian ethic of ‘all humans are created in the image of God, Imago Dei.’ ”

Because of this belief and because of a turbulent history, Williams-Skinner said she found it hard to fathom any form of discrimination still existed.

“What has taken root in the enduring assumption of white superiority and black inferiority, 224 years written into the law, is a spirit that lives on even to our language of white and black, white meaning ‘purity and moral and lightness and rightness,’ and black meaning ‘dangerous, discontent, negative, evil, hostile,’ ” she said. “It lives on in the basket of privileges given to whites over blacks in every sphere — wealth, housing, you name it. Cultural, art, education, even, and especially, in the criminal justice system.”

She listed watershed moments: Three-Fifths Compromise, the 13th through 15th amendments to the U.S. Constitution, the life of King and the recent presidency of Barack Obama — all significant occurrences for the black community. None of them eradicated the “system of inequality.”

Let me say again that the very notion that skin color, biological pigmentation, a factor created by God and not by humans, is of greater value if it’s white than if it’s black, ought to trouble us greatly on the human scale as human people. – Barbara Williams-Skinner

“So I want to state this again: ‘Get over it and don’t blame me; I didn’t have slaves’ is not going to get us where we need to go toward racial healing,” Williams-Skinner said.

In 1852, abolitionist Frederick Douglass wrote a speech titled “What to the Slave is the Fourth of July?” Williams-Skinner echoed Douglass’ sentiments.

“First of all, we must all practice civility by envisioning those outside of our comfort zone as totally human, the way we want to be viewed as totally human,” she said. “You can’t converse honestly and authentically with people you don’t believe are equal to you. Cannot do it.”

Secondly, she said, Americans should practice “gracism,” a term coined by David A. Anderson, author of Gracism: The Art of Inclusion. The opposite of racism, gracism is defined by Anderson as the “radical inclusion for the marginalized and excluded.”

Williams-Skinner said the next step is educating children to be appreciative of other cultures.

“I said to (Birdsall) when I first met him that in order to be successful as an African-American, I had to get the equivalent of a Ph.D. in ‘white-ology,’ ” she said. “I had to know everything there is to know about white people, but my white counterparts don’t even have to know who Sarah Vaughn is … the idea that I don’t have to know Native American or Asian culture to be a full human being — there’s something limiting about that.”

Williams-Skinner said the nation needs to rid itself of the belief that any human is “offensive to God.”

“African Americans and their white colleagues ought to start building bridges of entrepreneurial collaboration with other countries like India and South America to rebuild distressed black communities,” she said. “It’s not going to happen in these United States of America. But that would be a critical undertaking.”

Finally, she said, all people need to realize they “are sinners in need of grace.”

“At the foot of the cross, we all are equal,” she said. “It is at that foot of the cross that we are set free to love our neighbors as ourselves. The prophet Micah asked the question that we must ask ourselves today: ‘He has shown you, o people, what is good, and what does the Lord require of you, but to do justice, love mercy and walk humbly with your God?’ ”

Birdsall picked up where Williams-Skinner left off — with God.

“There are three times in my life where I feel I’ve had an encounter with God, which has really affected the trajectory of my life,” he said. “The first three took place in libraries — one in Boston, one in Oxford, one in New York City, but the fourth encounter took place at a very strange place to meet God, and that was the (Hertz rental lot) at the O’Hare Airport in January 2015.”

It was 1 a.m., and Birdsall was at the lot to exchange a problematic rental car. The woman helping him was African-American and about his age. He said she was “very gracious, very professional and very efficient,” and Birdsall wondered why she wasn’t at home with her family at this hour. They had a good conversation while they were waiting, and suddenly reports concerning a young, black Chicago man flashed on the television.

“It was awkward to be across the counter from this woman,” he said. “I was hoping it would go to commercial break after that story, but it went to another story of a young, black man in Chicago.”

Birdsall, not knowing what to say, asked the woman how it made her feel. And without a second thought, she said, “Hopeless. I used to have hope, but I’m beginning to lose hope.”

“I believe in the power of hope, the relentless power of hope,” Birdsall said. “The apostle Paul said, ‘Now these three remain: faith, hope and love; but the greatest of these is love.’ But hope is a very powerful force for people who can continue no matter how great the odds.”

Birdsall was also inspired by a text exchange between Obama and his spiritual adviser, Joshua DuBois. On the morning after the Mother Emanuel shooting, Obama texted DuBois, “We need people of the majority culture — white Christians — to have the courage to help drive the dialogue in search of some answers.”

“As I read that, I thought, ‘I fit that description. I’m a member of the majority culture. I’m a white Christian,’ ” he said. “When I was a boy and there would be terrible things happening, I would think, ‘Why doesn’t somebody do something?’ Well, now I’m in a position to do something.”

After the 2015 conference call, the religious leaders wanted to write an open letter committing to making a difference, but many had never met. An in-person gathering was convened, and Birdsall noticed an immediate disconnect.

“Because as Barbara and Joshua and African Americans would come in, they would meet each other with a warm hug and laughter, the joy of being together, as white leaders would come, likewise, they would embrace one another and share greetings,” Birdsall said. “But all too often, I observed that when whites and blacks would meet, they would extend their hand politely and say, ‘Your name is? From?’ And I thought, ‘This is almost incomprehensible.’ This is the varsity, right? This was the ‘A-team’ from both the black community and the white community, and in many cases they did not even know each other.”

Birdsall says all Americans can invite someone of a different race into their home.

“I know that having been a missionary in Japan, it was much easier to spend the day with fellow Westerners, Europeans, Americans with a common language and history,” he said. “It took effort to be speaking Japanese in a way that was meaningful, but it was also an investment in another culture.”

Birdsall said the highest honor while in Japan was to be invited into a family’s ancestral village during the holidays. Christmas, Thanksgiving and other special occasions brought previously separated people together.

“I believe in the story of the Tower of Babel that separated us,” he said. “I also believe in the hope of Pentecost that brought us together. And I believe in the … vision that someday for every language, nation, tribe and tongue, as far as you can see, will all be together giving praise to God.”

Even though all friendships take work, Birdsall said, they are one of “the greatest gifts we can give.”

“Too often times, we see the other either as a threat or as a commodity,” he said. “Jesus said, ‘I no longer call you servants, I call you my friends.’ And when the other becomes friend by the first-name basis, God can do something wonderful.”