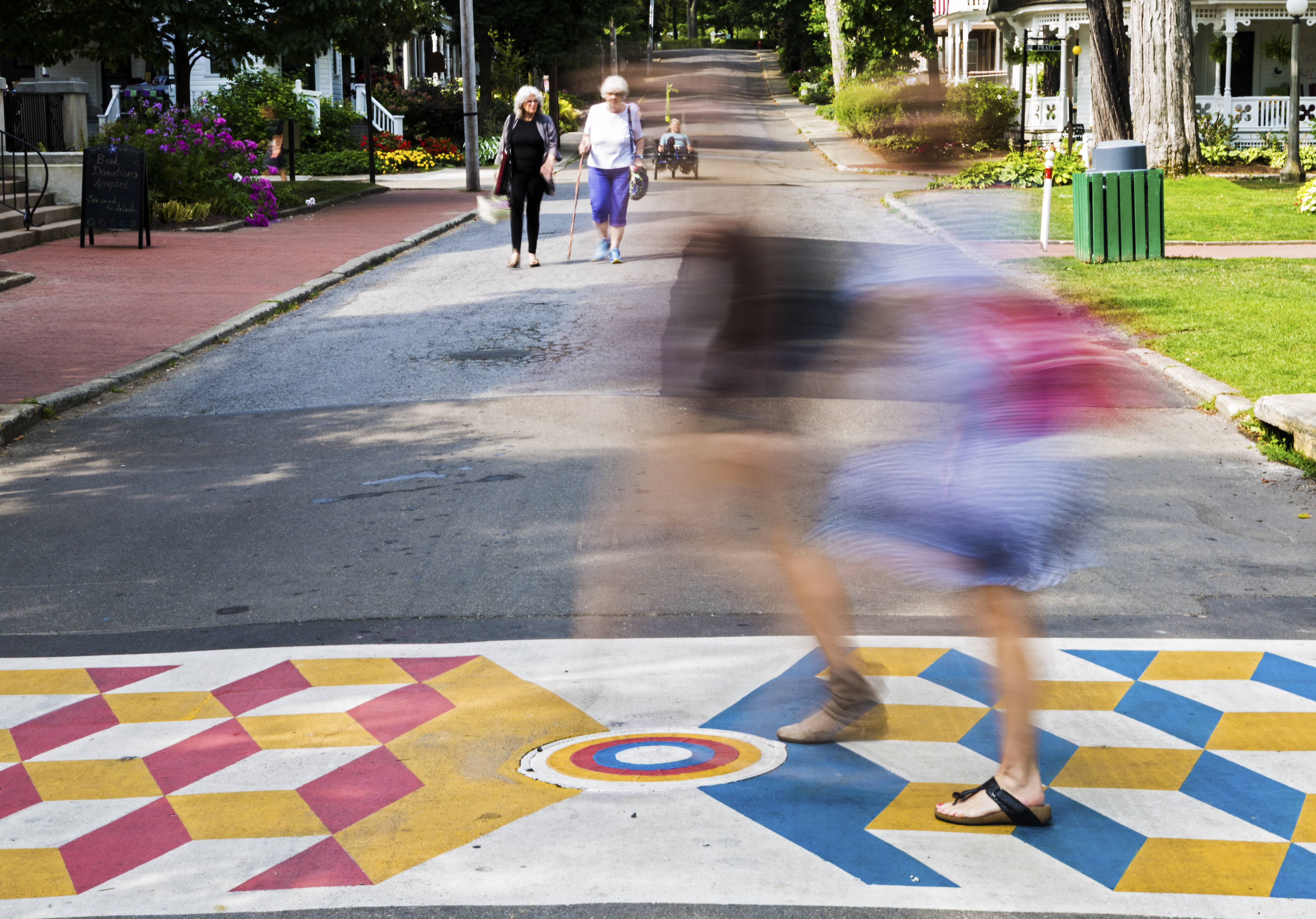 Chautauquans walk the newly repainted crosswalk at the intersection of Clark and Miller Thursday, Aug. 17, 2017. The popular public art display was designed by Don Kimes, artistic director of the Visual Arts at Chautauqua Institution, and repainted with the help of two of his students from the School of Art. ERIN CLARK / STAFF PHOTOGRAPHER

As Don Kimes, artistic director for the Visual Arts at Chautauqua Institution, recalls, the request was for something “interesting.”

John Shedd, director of operations, asked Kimes last summer to design a crosswalk to be painted near the Amphitheater.

“It was early (in the) season and I said ‘sure,’ because I didn’t realize how much work that involved,” Kimes said.

It took Kimes eight days in 2016 to paint the crosswalk, which crosses Miller between the Brick Walk Cafe and the Hultquist Center. When planning, Kimes had several ideas in mind.

Kimes’ design was inspired by a Pompeii floor mosaic.

“But in Pompeii, it’s black and white,” he said.

“Last summer we were in the midst of this intense political campaign, so I went with red and blue as the major colors,” he recalled. “So it had that kind of slight political overtone, which seemed to make sense on your way to the Amphitheater.”

Kimes also wanted to incorporate a “notion of being open-minded,” he said.

A manhole cover in the center of the walk reminded Kimes of the semi-circular shape of Congress. He chose a quote, from the artist Francis Picabia, for the circle in the center.

“The quote is: ‘Our heads are round so our thinking can change direction,’ ” Kimes recited. “I put that in the center of this piece where the red and the blue were kind of pointing at each other, in a clash almost.”

Kimes said he thinks the design is a good representation of what goes on at Chautauqua and in the Amp.

The walkway was completed last summer, but construction on the new Amphitheater wreaked havoc on the new art. Heavy machinery ran over the design, a water main broke underneath the crosswalk and part of the road had to be dug up. By the beginning of the 2017 season, there wasn’t much left of Kimes’ original work.

This summer, with the help of two School of Art students, Eder Perez and Calvin Brett, the crosswalk was restored.

Kimes said every time he walked near the Hultquist Center, someone would ask if he planned on redoing the crosswalk.

As of Week Eight, it was almost entirely redone. All that was left to do was repaint the Picabia quote.

“I’ll probably have to touch it up again next spring,” Kimes said. “But it won’t be anything like what we had to do this year.”