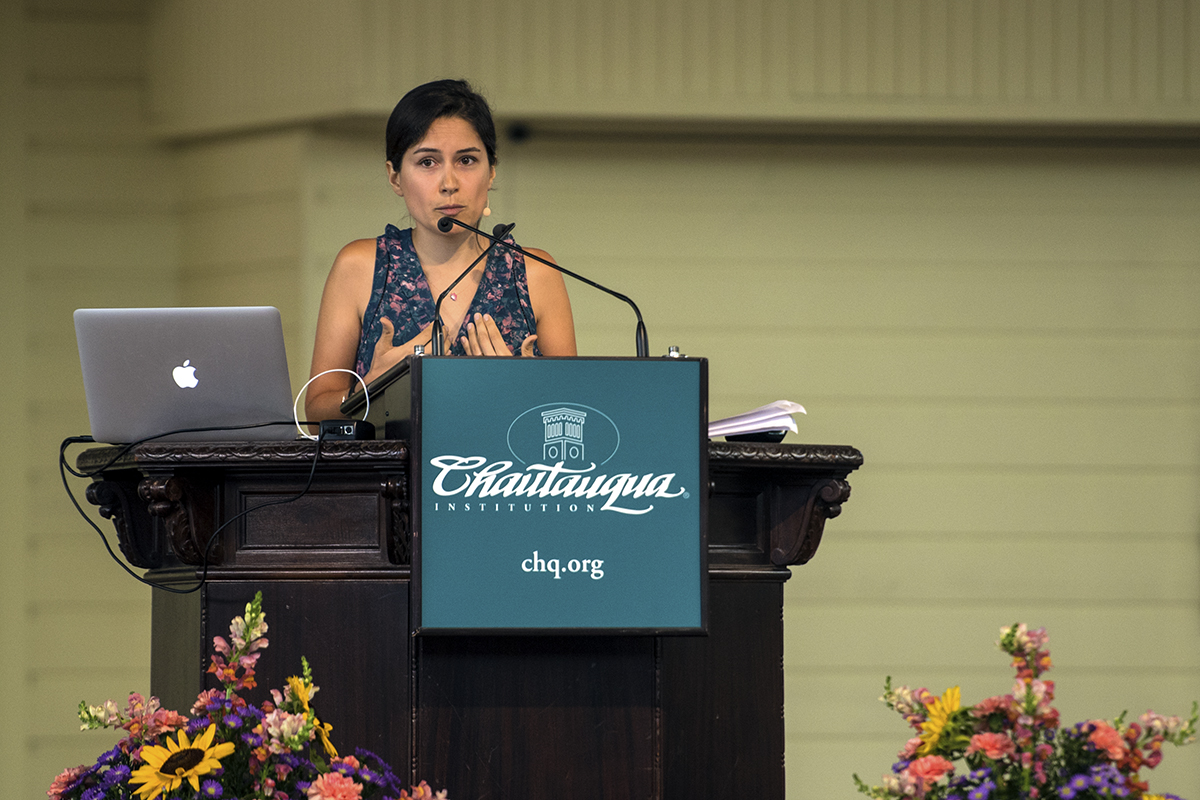 Journalist Arzu Geybulla delivers her lecture “Digital Media in Authoritarian States: Case of Azerbaijan” Wednesday, Aug. 16 2017 in the Amphitheater. Geybulla was branded a traitor by the Azerbaijani government and blackmailed along with her family. She currently lives in self-imposed exile in Turkey. OLIVIA SUN / STAFF PHOTOGRAPHER

Henry Luce, co-founder of Time magazine, once said he “became a journalist to come as close as possible to the heart of the world.”

Arzu Geybulla, a journalist and columnist who focuses on the human rights and press freedoms of her native Azerbaijan, has a slightly different motive.

“I became a journalist to come as close as possible to the heart of storytelling,” Geybulla said.

Speaking Wednesday morning in the Amphitheater amid Week Eight: “Media and the News: Ethics in the Digital Age,” she brought some of those stories to Chautauqua.

Situated at the borders of Russia, Iran, Georgia, Armenia and the Caspian Sea, Azerbaijan has a relatively small population at 9.8 million.

“And yet, it is a country with the highest number of political prisoners per capita,” Geybulla said. “Its leaders wouldn’t tell you about this; in fact, much of what I’m about to share with you today, they won’t like.”

“But then,” she added, “that is why I cannot travel back to Azerbaijan, and live in self-imposed exile.”

After being ruled by a rotating series of empires and dynasties, Azerbaijan experienced a brief period of liberal independence in 1918. But within two years, Soviet Russia invaded. For the next 70 years, it would stay in power.

When the Soviet Union finally collapsed, Azerbaijan was left to face “economic collapse, domestic political chaos and an ethnic war with neighboring Armenia over the territory of Nagorno-Karabakh,” Geybulla said.

“The consequences of this decision — choosing energy over democracy — were catastrophic,” Geybulla said. “Without any internal mechanisms of control, we, the people, found ourselves in a state where fraudulent elections, corruption, (a) dismantled legal system (and) systematic crackdown on critics became a norm.”

Of course, not every institution was degraded. Kept in place by nepotism and corruption, the ruling family consolidated power and rewrote laws to broaden the scope of their powers.

“The only thing that has changed in the history, in fact, of all the elections that we’ve seen in Azerbaijan take place since independence, is how open these violations have become,” Geybulla said. “And no one is trying to hide it anymore. So you can really watch how ballots are being stuffed at polling stations.”

By the 21st century, there remained virtually no independent media institutions that could act as a check on the government.

But there are still journalists: “men and women who’ve risked their lives to cover these stories.”

It is a country with the highest number of political prisoners per capita,” Geybulla said. “Its leaders wouldn’t tell you about this; in fact, much of what I’m about to share with you today, they won’t like. But then, that is why I cannot travel back to Azerbaijan, and live in self-imposed exile.”

One such figure was Elmar Huseynov, the editor-in-chief of a weekly publication who, in 2005, was shot in front of his apartment and left for his wife to find.

“The magazine angered officials,” Geybulla said. “It faced several lawsuits and its journalists, including the editor, Elmar, were constantly persecuted and received threats. Huseynov never gave up, and he was committed to doing the journalism that he was doing.”

By 2009, the government had further entrenched itself by eliminating presidential term limits through a sham referendum. Soon after, foreign radio services were taken off the air.

“The same year, two of my friends, Emin (Milli) and Adnan (Hajizada), got arrested,” Geybulla said. “All of a sudden, the authorities were not just after members of traditional opposition parties, but they were also after this modern, tech-savvy, Western-educated youth.

“Let me rephrase that,” she continued. “They were after those who were not on their side.”

Milli and Hajizada had founded two different Azerbaijani youth initiatives, one of which helped students study abroad and the other that engaged returning students in community work.

“This was not something the authorities liked, especially because they had no control or influence over the context of these youth movements and the teachings that they were providing,” Geybulla said. “Emin and Adnan were potential threats.”

Following the pair’s production of a satirical video mocking the Azerbaijani Ministry of Agriculture’s purchase of two $41,000 donkeys, they were both arrested on trumped-up hooliganism charges.

“Now, for us it was funny; I see for you, it also sounds very funny,” Geybulla said to the audience. “But the government didn’t think it was funny.”

Hajizada and Milli were sentenced to two years and two and a half years, respectively. The international press decried the violation, and after a year they were both released. But since they were freed by a presidential pardon, not a court retraction, the criminal charges stayed on the books.

State corruption continued as usual through the next election cycle.

“But then came the Arab Spring,” Geybulla said.

Inspired by what had happened in other countries, activist Elnur Majidli took steps to “test the borders and see whether something (similar) could actually happen in Azerbaijan.” Using social media, Majidli organized a day of national protest on March 11, 2011, to “express … dissatisfaction with the authorities.”

But the movement’s Facebook page had been infiltrated by government spies, and when the day came, the police had already taken control of the designated meeting places.

Soon after, Geybulla (who was living in Istanbul) got a call from her dad.

“His first question was whether I was plotting to overthrow the government with my friends,” Geybulla said. “I said, ‘Hi, Dad. No, Dad. Wait, do they really think we’re overthrowing the government? Were authorities so intimidated?’

“Turns out they were,” she added.

Within a year, a series of exposés were written about the illegal business practices of the ruling family. Khadija Ismayilova, “Azerbaijan’s best and most well-known investigative reporter,” was key in unearthing such scandals as the million-dollar Dubai real estate owned by President Ilham Aliyev’s 11-year-old son and the stakes in the country’s biggest telecom company held by his daughters.

“Thanks to the work of journalists like Khadija, and (the) Panama Papers, today we know just how wealthy the ruling family in Azerbaijan is, and how all of that wealth was accumulated through offshore companies, complicated business schemes, corruption and money laundering,” Geybulla said.

The government was mostly silent about the revelations, but the investigative reporting did not go unpunished. Later in 2012, Ismayilova was anonymously blackmailed with a covertly filmed sex tape of her and her partner.

Her brother was also sent the video, likely in the hopes that he’d kill her for having premarital sex.

But Ismayilova did not back down.

“At a press conference she organized shortly after receiving the package, she was very strong, and she was bold,” Geybulla said. “She said she had no intentions of stopping her investigative work.”

The government cracked down. New regulations made it harder to obtain information about property ownership, and all ex-presidents and ex-first ladies were granted immunity.

The leaders of another youth group, Nida, were the next to get arrested. The sentences ranged from six to eight years, and the members (some as young as 16) were accused of trying to overthrow the government.

“In the summer of 2014, following their arrest, offices of international organizations that had presence in the country since their early years of independence were raided,” Geybulla said. “Criminal investigations were launched against Open Society Foundations, IREX” and other organizations, including local media partners.

“At one point,” she said, “virtually all of the country’s well-known activists and NGO experts, including rights defenders, were under arrest on charges of hooliganism, tax evasion (and) drug possession.”

Ismayilova was arrested that December; radio and TV stations closed or were shut down, and independent journalists were rounded up and questioned. Some were let go, but others were charged.

By September of 2015, Ismayilova had been sentenced to seven and a half years; a number of other prominent journalists were jailed for similarly lengthy sentences.

“The reason these people ended up in jail was because President Ilham Aliyev was paranoid,” Geybulla said. “He feared that international organizations were in the country to fund an uprising and eventually overthrow him. And to prevent that, people had to be punished.”

Many of these political prisoners, including Ismayilova, were eventually released.

“But these men and women should not have spent a day in jail to begin with,” Geybulla said.

And 160 political prisoners still remain behind bars. Ten of them are journalists.

At one point,” she said, “virtually all of the country’s well-known activists and NGO experts, including rights defenders, were under arrest on charges of hooliganism, tax evasion (and) drug possession.”

“So where do I fit in all of this?” Geybulla asked.

In 2009, after starting a blog, she was invited to write with an Italy-based publication that covered the Caucasus and Balkans. And amid what she called “the golden days of blogging and social media,” Geybulla had the opportunity to train other aspiring Azerbaijani writers.

Through this work, she became involved with the Imagine Center for Conflict Transformation, a small nonprofit aiming to bilaterally end Armenian-Azerbaijani conflict over the disputed Nagorno-Karabakh region.

“Engaging in any kind of cross-border work comes with a price,” Geybulla said. “And often, especially these days, it’s interpreted as an act of treason.”

But she did it anyway.

The writing allowed Geybulla to cover the human side of the conflict, which Azerbaijan’s mainstream media typically ignored.

“People wrote what they were paid to write when they went back home, and what their editors were told to cover, especially given the political sensitivities of the conflict,” Geybulla said. “Humanity mattered little.”

This work made her a target for Azerbaijan’s government. She became “the target of (an) online defamation campaign,” and strangers labeled her everything from a sellout to a traitor to a whore. She was threatened with torture, rape and murder.

“It was quite interesting to watch all of this happen,” Geybulla said.

She considers herself lucky. Unlike Ismayilova, she wasn’t sexually blackmailed or prevented from leaving the country. And unlike various other dissidents, she doesn’t have a sibling in jail. She was never forced to hide in a foreign consulate, and she’s never been tortured, or had her teeth broken during pre-trial detention. She’s never been kidnapped from home, forced to re-enter the country and charged with illegal border crossing.

It could be a lot worse. And for many of her fellow citizens, it is.

She isn’t optimistic about the future of her country, truth be told.

“I have no illusion about change in leadership,” Geybulla said. “What I do know, and continue to strongly believe in, is the art of storytelling. And that, I’m not ready to give up on just yet.”