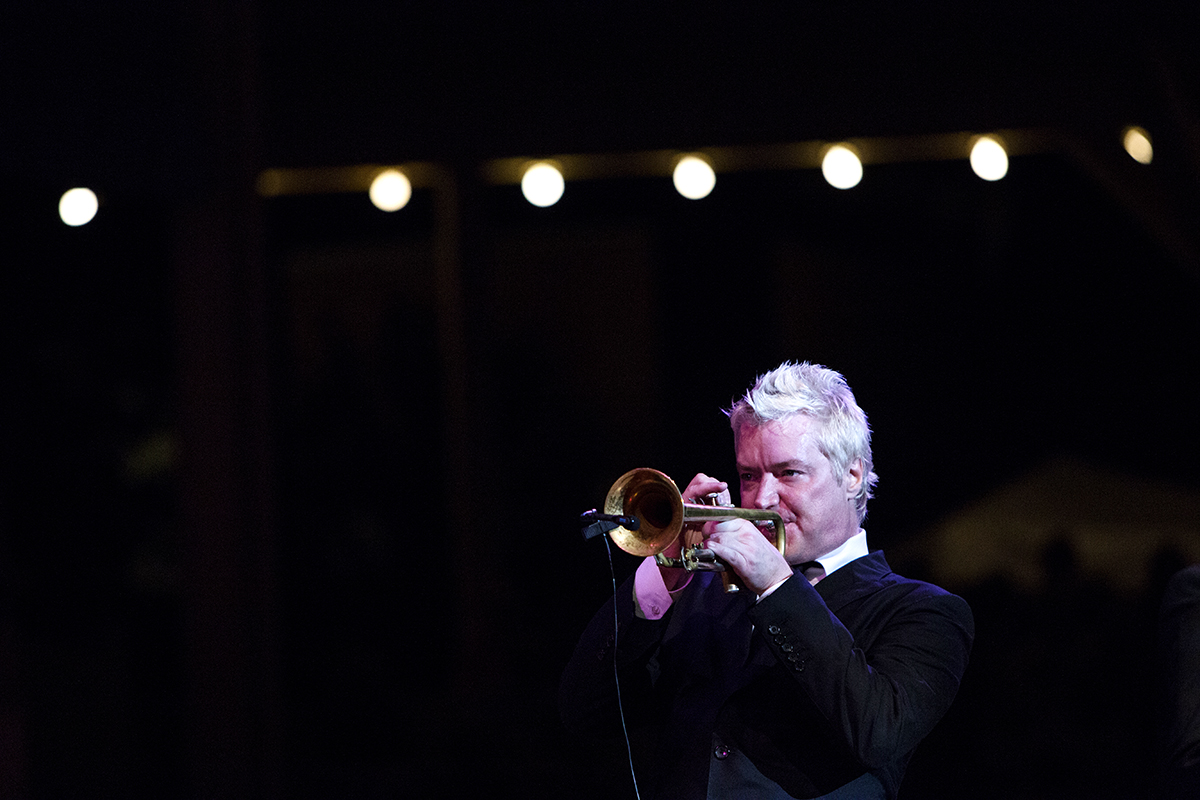 Trumpeter Chris Botti performs with the Chautauqua Symphony Orchestra Aug. 13, 2016 in the Amphitheater. Both Botti and Joshua Bell have been touring all summer and are Grammy-winning musicians. ESLAH ATTAR / DAILY FILE PHOTO

Last year, the Institution and board of trustees decided to make an extra investment in three special programs during the final season of the old Amp. One of those specials headlined a collaboration between virtuoso trumpeter Chris Botti and renowned violinist Joshua Bell, longtime friends who had not previously toured together.

The evening was a smash hit.

At 8:15 p.m. Monday in the new Amp, peripatetic Grammy winner and five-time nominee Botti brings his magic horn back to Chautauqua, and the evening is again full of promise. The program will swing between jazz and pop, and will also feature a synthesizer with an orchestra pad for some songs.

“(Violinist) Caroline Campbell tours with me regularly, so we’re in perfect synch,” Botti said. “We’ll have opera singer Jonathan Johnson and not-opera singer Sy Smith with us. We’re all excited to see what the new Amp looks, feels and sounds like.”

For the past three years, Botti has called the Mercer Hotel in New York City home.

“If you are traveling 225 days a year like I do, it’s just as well not to try to have a traditional home life. Normal is off the table for me. I think I own six suits and a trumpet.”

Relaxed and obviously well satisfied with his itinerant ways, Botti has worked with Frank Sinatra and toured with Paul Simon and Sting.

“I’ve done the rockstar tour,” he said. “With Sting, we had private chefs, lots of perks. It could get crazy. I prefer what we are doing now.”

What Botti and company are doing now is performing “only about 20 percent of the time in front of an orchestra,” he said. “Performing with an orchestra means you have a need to coordinate with that orchestra. You have to watch what they are doing. There is a diminished potential for spontaneity, and I love spontaneity.”

Showing the audience his personality is important to Botti, who certainly charmed the large Chautauqua audience a year ago.

“I knew in junior high school that I wanted to play jazz trumpet,” he said. “I did come from a musical family; my mother was a classical pianist, and my grandmother was a church organist for many years in Portland, Oregon, where I grew up. There were people in my family who made a living playing music. That inspired me.”

A key moment in Botti’s early life occurred when his band director loaned him a copy of a Miles Davis LP.

“Miles played ‘My Funny Valentine’ on one of the tracks. That was it. I was hooked,” Botti said.

“Once you get past Haydn and Hummel, there isn’t a whole lot out there,” he said. “And none of it offers the scope of a Miles Davis.”

“I am passionate about the road,” he said. “One night, we did a gig in Seoul, Korea. The next night we were booked into Jacksonville, Florida. So we finished the Korea date, flew all night to Atlanta, through about a dozen time zones, and hopped a small flight down to Jacksonville, and played the date there. No great problem, really.”

Not long after he leaves Chautauqua, Botti will perform in Jurmala, the Latvian seaside resort where a group of Chautauquans were based for a while during an exchange visit some 30 years ago before the fall of the USSR. And for the 13th straight year, he will play the legendary Blue Note Jazz Club in New York City over the Christmas and New Year’s holidays.

“Most people play the Blue Note for a week, and a week means five days because they get Monday and Tuesday off,” Botti said. “We’re playing it for four straight weeks, seven days a week, no days off. I love to play and perform, I love the Blue Note, and I’m home. I’m in New York.”