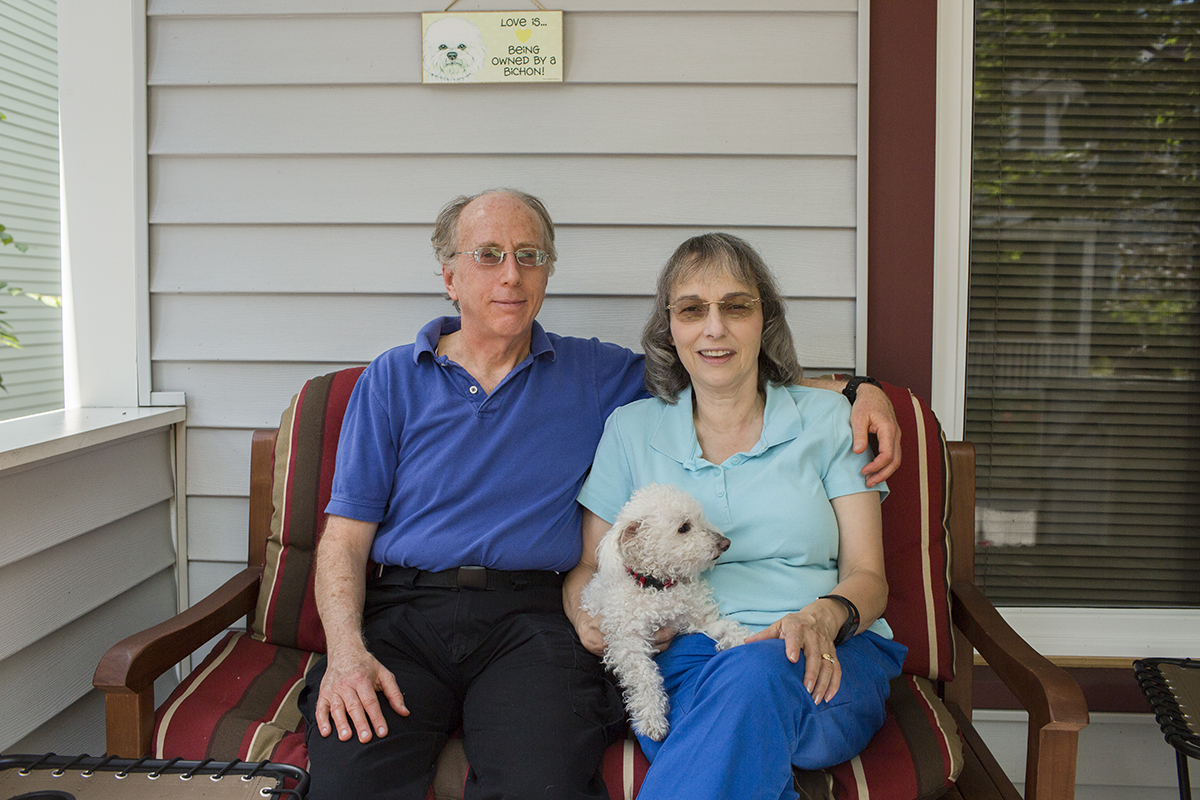 Jeremy Genovese and Teresa Kammerman, founders of the Chautauqua Vegan Group, pose for a portrait on Tuesday, Aug. 15, 2017 in their home. CAM BUKER / STAFF PHOTOGRAPHER

Throughout the week, speakers are appealing to Chautauquans’ minds. The Chautauqua Vegan Group is taking a different approach — appealing to their stomachs.

At 6 p.m. Tuesday in Hurlbut Church, the Chautauqua Vegan Group is hosting a free community potluck and welcoming all Chautauquans to sample vegan foods. Jeremy Genovese, founder and head of the group, wants to show people that going vegan doesn’t have to be a sacrifice.

Tuesday’s potluck will feature a vegan and gluten-free lasagna made by Burke Lindquist, the executive chef at La Familia, as well as an array of sides and desserts made by the members of the Chautauqua Vegan Group.

“There’s never been an easier time to be vegan,” Genovese said. “There are so many options out there; more and more restaurants are accommodating to vegan diets.”

For Genovese, the decision to be vegan is simple.

In just one month, an individual switching to a vegan diet saves 33,000 gallons of water, 900 square feet of forest land and 600 pounds of carbon dioxide emission, according to the vegan calculator, a website that uses information from reports by the Food and Agriculture Organization of the United Nations, Georgetown Environmental Law Review, and the International Livestock Research Institute.

In addition to reducing one’s carbon footprint, one month on a vegan diet saves 1,200 pounds of grain.

“We feed grains that human beings could consume to animals and it’s a very inefficient system,” Genovese said. “If people just ate the grains and the soybeans directly, you could feed far more people than you could eating animals.”

Animal agriculture is simply not sustainable, he said. If people are concerned with “feeding the hungry people of the world,” they must “butt up against this issue of eating meat.”

There’s also a selfish advantage to switching to a vegan diet — a longer, healthier life. According to a study by the National Center for Biotechnology Information, a plant-based diet reduces the risk — and reverses the effects — of diabetes and heart disease, two of the leading causes of death in America.

Only 2.9 percent of individuals on a vegan diet had diabetes compared with 7.6 percent of meat eaters, according to a 2009 report by the American Diabetes Association based on data from Adventist Health Studies.

For more information about the impact of animal agriculture, check out these resources.

• How Not to Die by Gene Stone and Michael Greger

• The Starch Solution by John A. McDougall

As part of another NCBI study, patients with heart disease followed a plant-based diet, consisting of around 70 percent carbohydrates, for one year. Eighty-two percent of them experienced a regression in atherosclerosis.

Teresa Kammerman, Genovese’s wife and co-leader of the Chautauqua Vegan Group, is a pediatrician in Ohio. She’s often confronted with parents who are hesitant to let their teenagers switch to a meatless diet.

Kammerman urges parents to work with their children to plan meals, since “it’s a healthier diet in the long run than the junk that most kids consume.”

While Genovese said environmental and health concerns are persuasive reasons to go vegan, they aren’t the main drive for his own veganism.

“I would argue that one should be a vegan if there were no health benefits associated with it,” Genovese said, “on moral grounds alone.”

Genovese was already vegetarian for a number of years when he made the switch to a vegan diet.

Fifteen years ago he heard Peter Singer, author of Animal Liberation, speak in the Amphitheater. Singer’s lecture on the moral capacity of animals urged Genovese to take the leap into a diet, and lifestyle, free of animal cruelty.

“Our science shows us that animals are much more similar to us than we previously thought,” Genovese said. “The boundary line that we want to make so sharp is actually much blurrier than most people think.”

Animals have the ability to suffer both physical and emotional pain. A study done by the University of Veterinary Medicine in Vienna showed the early separation between a dairy cow and her calf had longterm effects on the calf’s social behavior. Cattle that grew up with their mothers had higher levels of cortisol — the stress hormone — during isolation.

On dairy farms, female cows are artificially inseminated in order to produce milk, only to have their babies taken from them less than 24 hours after birth so the milk can go toward filling cereal bowls and coffee cups instead of feeding their young.

If the calf is a boy, he’s taken for veal. If she’s a girl, the cycle continues. Cattle are herd animals; the University of Veterinary Medicine in Vienna study shows that human interference in their normal behavior affects their quality of life.

Genovese said there’s countless other examples of emotional attachments and relationships between beings across the animal kingdom that are disrupted by human interaction.

He doesn’t see any justification for ignoring those concerns.

“He won’t even let me have leather seats,” Kammerman said. “No leather clothing.”

Kammerman eats an entirely vegetarian, and mainly vegan, diet. Her realization for the switch didn’t come from a speaker on the Amphitheater stage, but rather from a gift.

Twelve years ago, Kammerman and Genovese were given their dog, Bella, as a surprise. Like many dog owners, Kammerman noticed Bella had her own personality, complete with favorite toys and daily routines.

“She loves me, so I couldn’t eat her friends,” Kammerman said. “It’s as simple as that. Once you get to realize that she has a real strong affection for people, how could you destroy that? And what’s the difference between eating a dog or eating a pig or a cow?”

The difference is that eating meat from those animals is socially accepted. Genovese said while most people say violence should only be used as a last resort, they participate in the everyday violence of factory farms.

They just don’t see it.

“We have designed a system that puts the cruelty of eating meat at an arm’s length from us,” Genovese said. “Meat is not an animal, it’s something that comes in a package that you buy. In order to eat that steak, an animal had to be killed under some set of circumstances that if you were really cognizant of you might not (eat).”

Even when they’re aware of the information, people can be hesitant to adopt a new diet for fear of seeming “weird to their friends,” Genovese said.

But veganism has recently been on the rise. According to a 2017 report on the “Top Trends in Prepared Foods,” 6 percent of Americans identify as vegan, compared with 1 percent in 2014.

Even in the Chautauqua community, the openness to veganism has been growing. Lindquist, the chef of La Familia, said he often creates vegan meals for Genovese, Kammerman and other vegan Chautauquans.

Lindquist said “veganizing” meals offers a challenge because it’s different than his usual cooking style, a mix of classical French cooking with new style techniques. But it’s a challenge he embraces and enjoys.

“That’s the difference between a cook and a chef,” Kammerman said. “A chef gets excited about creating something for you, and they’re able to modify a dish to show their talents.”

“Food represents a social bonding for people,” Kammerman said. “When you’re challenging what they eat, you might be challenging their social beliefs.”

“There’s people who just think it’s weird,” Genovese said. “They can’t think outside of the channels they grew up in.”

It might take a few generations to persuade more of the public, he said, but “we’ll get there.”