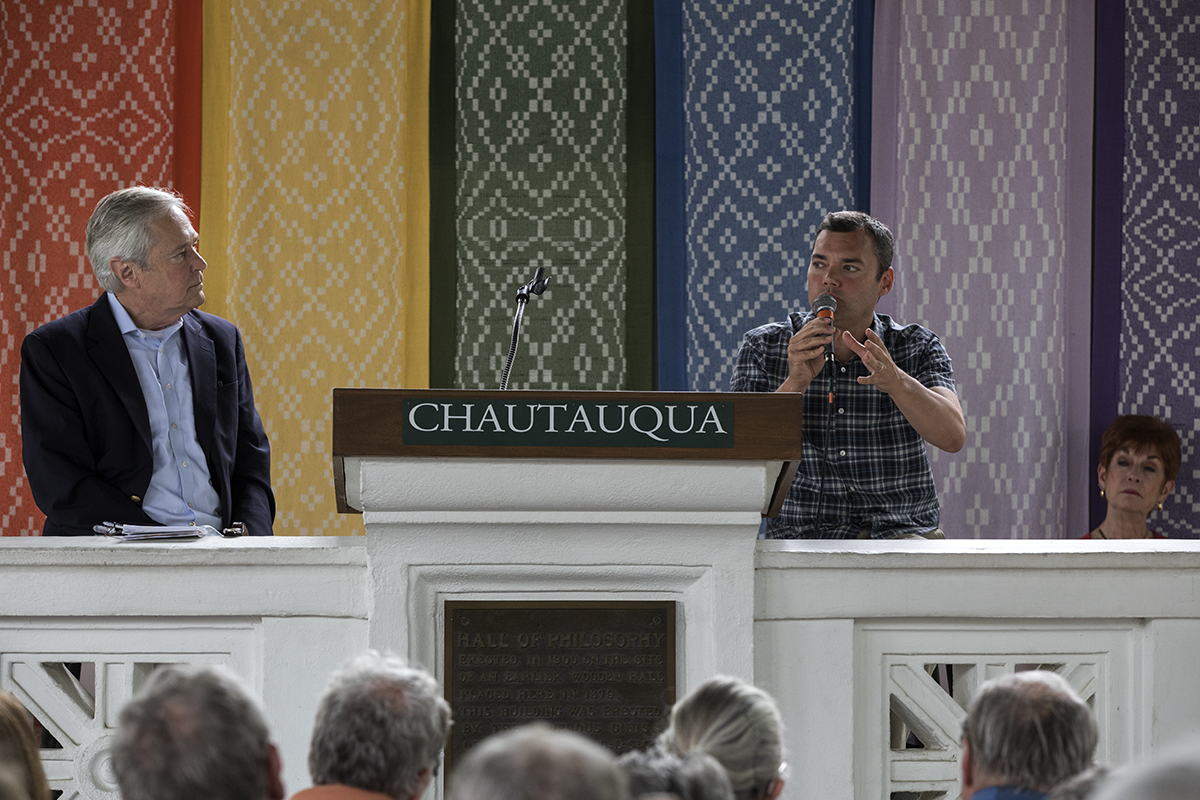 James Fallows, national correspondent for The Atlantic, and Peter Beinart, associate professor of journalism and political science at the City University of New York, discuss Beinart’s lecture on “Tribalism, Globalism and Judaism in the Age of Trump” Tuesday, Aug. 15 in the Hall of Philosophy. PAULA OSPINA / STAFF PHOTOGRAPHER

Peter Beinart has been reading James Fallows’ work since Beinart was in junior high school.

But that’s not what Beinart and Fallows, associate professor of journalism and political science at the City University of New York and national correspondent for The Atlantic, respectively, came to speak about Tuesday in the Hall of Philosophy. Their conversation was titled “Tribalism, Globalism and Judaism in the Age of Trump,” part two of five in Week Eight’s interfaith component of “Media and the News: Ethics in the Digital Age.”

The beginning of Beinart’s lecture served as a reminder of President Donald Trump’s endorsement of the Reforming American Immigration for Strong Employment Act, or RAISE Act, two weeks ago. Shortly after the announcement, Stephen Miller, Trump’s senior adviser for policy, and Jim Acosta, senior White House correspondent for CNN, got into a heated exchange.

In their conversation, Miller accused Acosta of having a “cosmopolitan bias to a shocking degree.”

“What makes this so fascinating is that historically, ‘cosmopolitan’ has been perhaps the quintessential anti-Semitic euphemism,” Beinart said. “The claim historically was often that Jews were loyal to global capitalism or … global communism or global liberalism or … global Judaism, but not loyal to the countries in which they lived.”

Miller’s word choice was especially fascinating to Beinart because Miller himself is Jewish. Therefore, through the lens of this recent exchange, Beinart wanted to attempt to explain Trump’s influence on Jewish politics.

“Trump has reframed and exacerbated a very old tension within Jewish identity between tribalism and universalism,” he said. “I want to suggest that while Jewish tribalism has its place, even — indeed — its virtues, that what we are seeing is a very dangerous marriage between Jewish tribalism and Trump’s oppressive, chauvinistic use of state power.”

Judaism, he said, is distinct from its Abrahamic cousins. Similar to Christianity and Islam, Judaism offers a universal message to humanity. But unlike other faiths, Judaism stakes a claim as “the property of one specific people or nation or tribe.” Therefore, “Jewish people” is a more singular phrase than “Christian people” or “Muslim people.”

In the makeup of the b’nei yisrael, or “children of Israel,” two distinctive groups have emerged — tribalists and universalists.

“The Torah, interestingly — Jewish tradition, interestingly — imagines humanity beginning with universalism, with a universal people, Adam and Eve, et cetera,” Beinart said, “and interestingly ending in a messianic future in which the temple is rebuilt and all people pray together there in Jerusalem.”

And the middle of the Torah presents the story of a particular group of individuals: The books of Numbers, Joshua and Judges, for example, depict the Jews’ fight against other tribes and nations.

It’s another document — Israel’s declaration of independence — that confirms the “freedom, justice and peace” that the Hebrew prophets envisioned. The state of Israel, at the same time, is eager to “create and maintain a Jewish majority.”

Politically, these ideas have led the Jewish “right” to lean toward tribalism and the Jewish “left” to gravitate toward universalism, but it has never been an exclusive distinction on either side of the spectrum. Beinart saw this polarization come to fruition in the Ronald Reagan and George W. Bush presidencies.

In past decades the Jewish “left,” on the other hand, was not entirely universalistic. Their sympathies often aligned with minority and marginalized groups, but the idea of a Jewish state was still widely accepted.

Trump has reframed and exacerbated a very old tension within Jewish identity between tribalism and universalism,” Peter Beinart said. “I want to suggest that while Jewish tribalism has its place, even — indeed — its virtues, that what we are seeing is a very dangerous marriage between Jewish tribalism and Trump’s oppressive, chauvinistic use of state power.”

Yet even pre-Trump, Beinart was able to see polarization begin to occur, particularly between generations.

Millennial American Jews have a tendency to be more lowercase-“L” liberal and universalistic than their parents. Instead of seeing the Jewish state as a necessity, this demographic sometimes sees the preservation of it as “narrow-minded or even bigoted,” he said.

Whereas millennials are expanding the definition of Judaism, the Jewish Orthodox community, which has proved to be more right-leaning, is narrowing it. Their inclination toward separate schools, communities and dress codes, for example, paints an exclusive picture, Beinart said. One of the tradition’s most common phrases, often used to describe the Israeli-Palestinian conflict, is “Esau hates Jacob.”

This, Beinart said, can be seen in Trump’s call back to the “primacy of the American nation,” not for the original set of American ideas but for the country as a distinct, separate group of people.

“In response, the American left has become more defined by its rejection of Trump’s hard-edged, ethnically based notion of American nationality,” Beinart said, “which the left sees as being based on religion and race and excluding Muslims and Latinos and abandoning America’s moral obligations.”

Historically, Jews have been considered in politics as “the other” and made a home in their status as a  secondary group. However, Trump’s administration is offering Jewish people the chance to move into the primary group instead. This is probably, Beinart said, because those in the White House are impressed by  Jewish nationalistic values.

“They, many of Trump’s supporters, admire Israel because it represents the opposite of the values that they associate with liberal diaspora Jews,” Beinart said.

But there is still a distinction between Jewish and political life, he said. It’s one thing for Jews to feel a special obligation to their own people and another to ally themselves with “what is essentially a bigoted state power.”

“Now, in the Trump era, we’re seeing this Jewish tradition even be tested by power in the United States as well,” Beinart said, “because although America is not a Jewish state, of course, we have a president who is essentially inviting Jews to marry their own chauvinism with the chauvinism of his government, which can be then enforced via state power.”

Trump’s persuasive tendencies have included recruitment of Jewish people to speak out against Muslims and Latinos, and some have taken the bait, including Joel Pollak of Breitbart News and Joshua Mandel, incumbent state treasurer of Ohio.

“We are being tempted, in other words, to forget our own history of persecution and to support the construction of a national identity based upon the rejection and persecution of ‘(the) other,’ ” Beinart said.

The Torah commands Jews 36 times to “remember the other” — more times than Shabbat observance or keeping kosher are mentioned.

At Beinart’s conclusion, Fallows immediately went into a Q-and-A portion, beginning with a question of the anti-Semitism of the present day. Fallows described the current climate with people openly carrying Nazi and Pepe the Frog flags as “a more nakedly anti-Semitic uprising than (he) has seen in (his) lifetime.”

“How do we reconcile this open anti-Semitism with the bargain you’re describing?” Fallows asked.

Beinart explained that white supremacists often view Jews as monopolizing the nation, global finance, the media, Hollywood and immigration. However, Trump and his administration have an inclination to hate individual Jews. Amid a “complicated, multi-layered discourse,” Beinart suggested a rejection of anti-Semitism, “not only because it threatens Jews.”

“The key thing for me is … also to reject any sense that Jews might be complicit with any part of its agenda to try to protect ourselves at the expense of groups that are even more vulnerable than us, like Muslims in particular,” Beinart said.

Fallows also asked if Beinart thought people associated with Trump may have any “buyer’s remorse in their hearts” after seeing those Nazi flags on the streets.