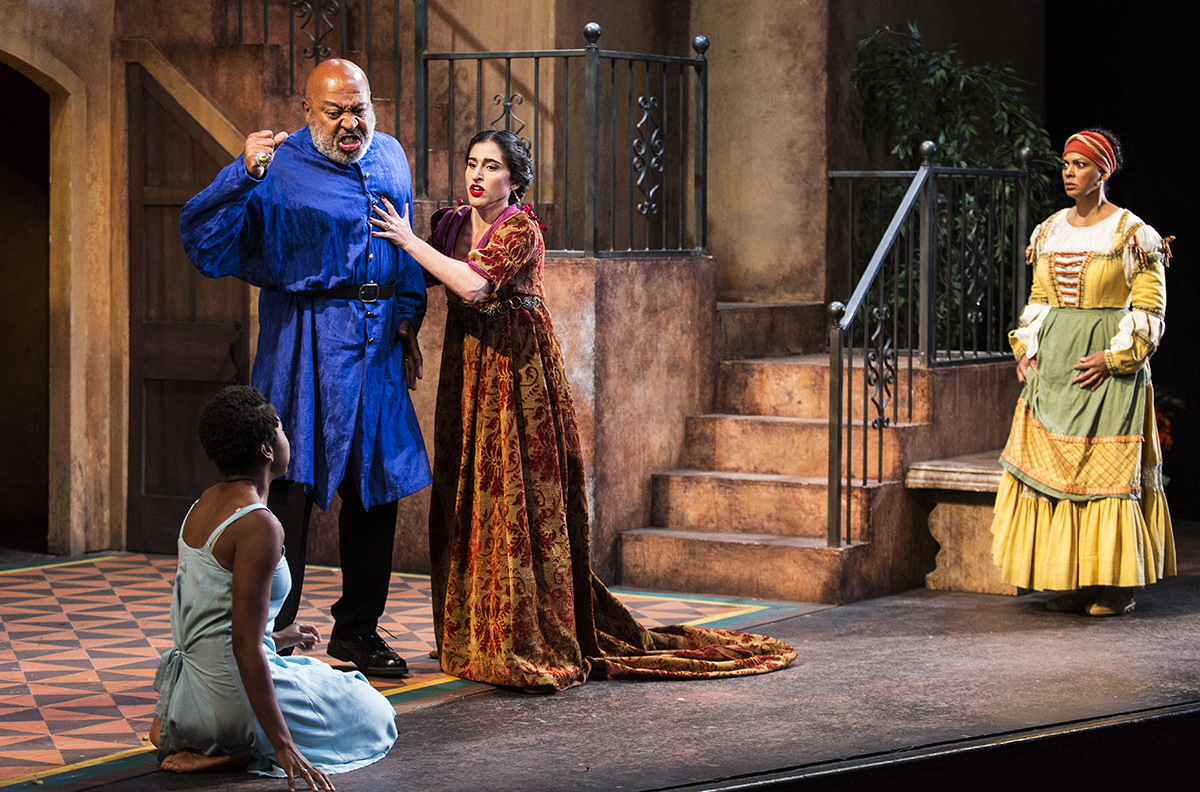 As Lord Capulet, one of the meatier parental roles in Romeo & Juliet, Keith Randolph Smith is the dad onstage.

In a way, he’s also the dad offstage.

Smith is among the three guest artists in Chautauqua Theater Company’s production of Romeo & Juliet, which continues its run at 7 p.m. Thursday in Bratton Theater. Along the way, Smith and the other guest artists have been doling out advice on auditioning, rejection and careers to the 14 young actors in the CTC conservatory.

Smith, who arrived at Chautauqua almost a month ago, previously appeared in CTC productions of Death of a Salesman, Three Sisters and The Tempest. He has numerous Broadway and off-Broadway credits, and has appeared in regional theaters around the United States as well as on such television shows as “Law & Order.”

He agreed to 2008’s Death of a Salesman not knowing anything about Chautauqua.

“I looked it up afterwards. I was like, ‘Oh, that seems interesting, a summer vacation for learning. That’s right up my alley,’ ” said Smith, who this season will be leaving with a new CTC T-shirt and at least $7 worth of books — which amounts to quite a few tomes — from the Smith Memorial Library book sale.

Although he calls Manhattan home, and has for some time, Smith is originally from Cleveland. He was a journalism major in college, but that changed when he saw a poster advertising auditions for Getting Out by Marsha Norman.

“Every day, I would just go past the theater, and I would be too afraid to go in to audition,” Smith said. “So it was finally the last day of auditions, and I just went, ‘Dude, you either got to do it or you’re gonna miss it.’ So I went in, I auditioned and I got a part.”

Smith said his curious nature attracted him to journalism. He worked at his school newspaper, television station and radio station, and was a copy boy at the Cleveland Press and Cleveland Plain Dealer.

The experience stayed with him, even though he quit journalism in his early 20s. Still curious, and now “north of 60,” Smith is pursuing his master’s in psychology at City University of New York.

“Even with theater, I look at it as an investigative reporter,” Smith said. “I ask questions. Why does a character do that? Why does she say this now? What is he doing?”

Along the way, Smith has received praise for his acting career. In a review of the recent production of August Wilson’s Jitney at Manhattan Theatre Club, Rob Weinert-Kendt, editor of American Theatre magazine, called out Smith for his supporting role.

“The standout work, as is often the case in his plays, comes from supporting players like Keith Randolph Smith, who plays Doub, a wary observer with a Troy-like self-reliance gospel and a harrowing Korean War story,” Weinert-Kendt wrote, referring to the central character from Wilson’s Fences.

Smith said the greatest compliment he can receive is when an audience member can’t see where his character ends and he begins, even if in real life the two are very different.

“When people come see plays, they always think your character is you,” said Smith, who practices Buddhism and is relatively soft spoken in real life. “And I go, ‘Ask anybody, I’m the biggest teddy bear in the whole company. I don’t raise my voice.’ ”

Following the weekend opening of Romeo & Juliet, a Chautauquan approached Smith to praise his performance, but said she could “feel his rage” in one scene toward Juliet.

“I’m a concerned dad,” he responded. “I wanted my daughter to be married to a prince.”

That audience review calls to mind a 2012 review of Fences at Virginia Stage Company. Mal Vincent, a longtime culture writer for The Virginian-Pilot, noticed Smith’s acting prowess in the role of Troy, the tragic hero and breadwinner in Fences. In one emotional scene, Troy tears into  his teenage son, shouting at him to “Call me ‘SIR’ in my house.”

“Smith pulls out all the stops in the physical forcefulness of his performance. Delicate nuance is not his game,” Vincent wrote. “Dare we say it? Smith is better than James Earl Jones was in originating the role on Broadway in 1987.”

In both Shakespeare and Wilson’s works, Smith has had the opportunity to portray a number of characters throughout his career, and his broader theater credits include roles in works by everyone from Moliere to Miller.

But CTC’s Romeo & Juliet is actually Smith’s first crack at the star-crossed tragedy. As a young man, he missed his shot at Romeo, but looks forward to one day tackling the title character in the Bard’s King Lear.

As for his castmates in Romeo & Juliet, he expects great things, and exchanged phone numbers so he can check in on one actor heading back to New York City.