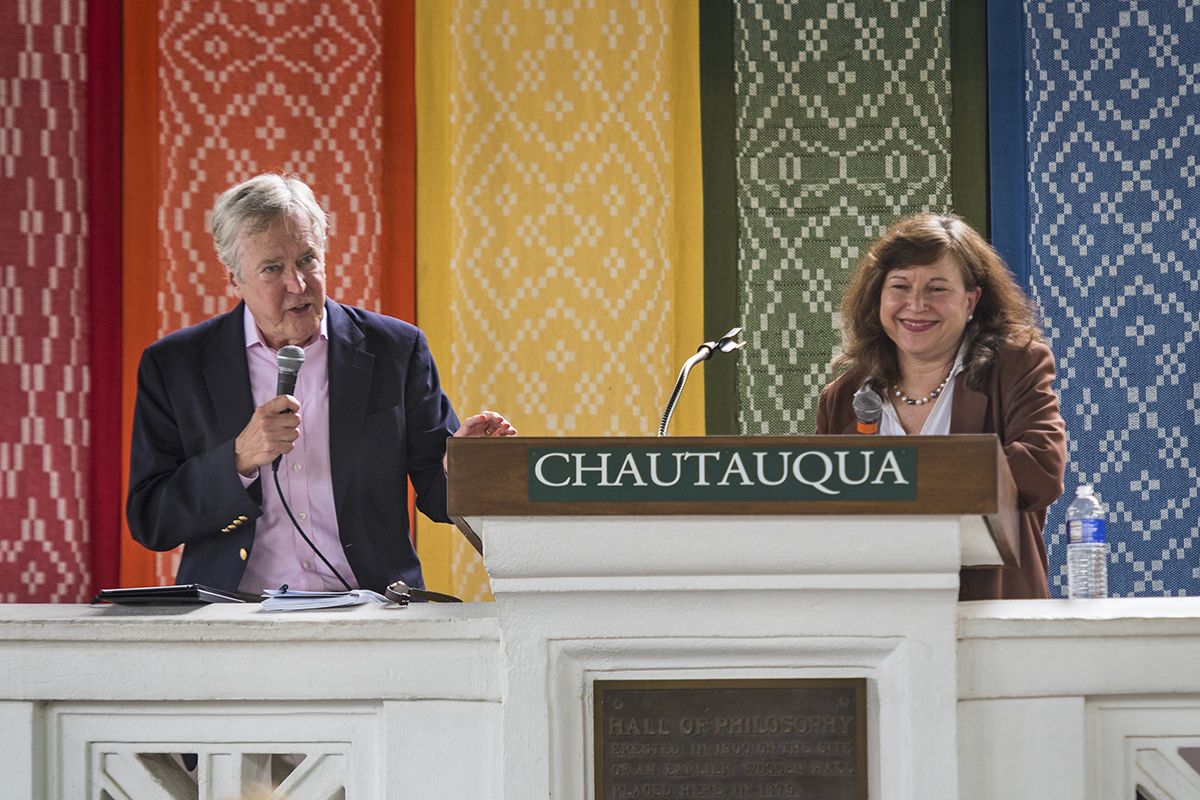 James Fallows, national correspondent for the "The Atlantic," and Diane Winston, the Knight Chair in Media and Religion at University of Southern California’s Annenberg School for Communication and Journalism, engage in a Q-and-A session after Winston’s lecture, “From Reagan to Trump: Religion, Ethics and the News Media,” Thursday in the Hall of Philosophy. OLIVIA SUN/ STAFF PHOTOGRAPHER

Thursday was Diane Winston’s 26th wedding anniversary. But this wasn’t the romantic afternoon she was expecting.

Instead, she spent it with her “new best friends” in the Hall of Philosophy, taking the podium with James Fallows, national correspondent for The Atlantic. Their conversation was titled “From Reagan to Trump: Religion, Ethics and the News Media” and was part four of five in Week Eight’s interfaith lecture component of “Media and the News: Ethics in the Digital Age.”

Winston began her lecture with a joke: A minister and a politician stand in front of the pearly gates as St. Peter receives them and escorts them to their new homes. Stopping in front of a “humble abode,” St. Peter tells the minister this is his new home. As they continue on, they stop in front of a palatial expanse among rolling hills. St. Peter points to the mansion, saying it is for the politician. The politician is flabbergasted. How is this his home?

“We get a lot of ministers, but you’re the first politician we’ve ever seen,” St. Peter responds.

This joke, Winston said, must be credited to President Ronald Reagan.

If she could give the Reagan era a headline, Winston said it would be “Reagan Appealed to Disaffected White Voters by Promising to Make America Great Again.”

“He promised jobs, a strong military and support for policies to end abortion and return prayer to the nation’s public schools,” said Winston, the Knight Chair in Media and Religion at University of Southern California’s Annenberg School for Communication and Journalism. “Embracing Richard Nixon’s Southern strategy, he wooed Southern Democrats.”

He also paid special attention to Christian evangelicals, appealing to the denomination in this statement: “You can’t endorse me, but I endorse you.” But Winston said his character traits and interests made for an atypical choice for religious conservatives.

“This 68-year-old, the oldest man ever to run for president, did not seem like a typical evangelical standard-bearer,” she said. “Yet, as president, Reagan inculcated a religious sensibility that fundamentally changed our national agenda.”

In fact, the joke from her introduction was part of an address, more commonly known as Reagan’s “evil empire” speech, to the National Association of Evangelicals in Orlando. This speech was a call for the end of abortion, the re-implementation of prayer in schools and the defeat of the Soviet Union. Days after this appeal, virtually every media outlet addressed Reagan’s statements. This, Winston said, demonstrated how crucial a role media plays in the way Americans view the country.

“Reagan believed the U.S. was exceptional because it is God’s chosen nation, a place where freedom is divinely ordained,” she said. “That freedom, he believed, should be manifest in the political freedom of democracy, the spiritual freedom of religious liberty and the economic freedom of free markets and limited government.”

After looking into these ideas, some have claimed Reagan was posing in his religiosity for the sake of advancing policies. Winston believes the opposite. She said Reagan was a “deeply religious man” responsible for creating a “new religious imaginary.”

“By religious imaginary, I mean a collective national sense of what matters and why, and which provides meaning, identity and purpose for the nation and its citizens,” Winston said.

This 68-year-old, the oldest man ever to run for president, did not seem like a typical evangelical standard-bearer,” Diane Winston said. “Yet, as president, Reagan inculcated a religious sensibility that fundamentally changed our national agenda.”

This concept is not one for discussing at the breakfast table, she said. Instead, it presents the deeper question of what one should do with one’s life, what occupation someone should take, what relationships people should enter into and what their worldview should be.

“Reagan helped shift the American religious imaginary, which from Franklin Roosevelt to (Lyndon B. Johnson), had affirmed a welfare state, a multilateral foreign policy and a religiously neutral public square,” Winston said.

That shift presented an ethic of the common good, she said, in national, global and personal responsibilities.

“At the same time, an equally momentous shift was occurring in the news media as chains and corporations amassed monopolies,” Winston said. “Before Reagan, the feds had blocked media monopolies with regulatory policies that promoted competition in numerous points of view, but Reagan’s free market approach ended that.”

That said, Winston cited Jeffry Odell Korgen and Vincent A. Gallagher’s book, The True Cost of Low Prices: The Violence of Globalization, which presented the following: In 1945, 80 percent of daily newspapers were family-owned; by 1989, the percentage of family-owned newspapers was reduced to 20 percent. She said this was probably due to the then-revolutionary approaches of USA Today and CNN, which “turned content and delivery norms upside down,” similar to social media in the present day.

“Designed for television viewers, USA Today was bright and accessible,” Winston said. “Its stories were short, its graphics colorful and its news content skewed to infotainment.”

And fast forwarding to the present day, she said these media trends have continued, but the digital revolution transformed the economy. The nation’s news has become more divisive and appealing to niche audiences. In fact, an analysis by BuzzFeed News found more than 180 partisan news sites that launched in 2016 alone. The media’s confusion of what Winston calls “fake fake news” and “real fake news” changed the way consumers interpret reality, a bit like “a trip behind the looking glass,” Winston said. These current ethical concerns reflect those of Reagan’s time.

“The Reagan-era religious imaginary wanted freedom, and it also trusted that God would materially reward his followers,” Winston said. “Man, made in the image of God, must be free, and free men, thanks to God’s blessings, are rich, powerful and successful.”

With that in mind, Winston wondered if it was surprising at all that, in the present day, a group called POTUS Shield, a network of “right wing Christian prayer warriors,” has formed. They hold the belief that God anointed President Donald Trump to save the country. Some people’s values, Winston said, have come into question.

“Millions of Americans have no problem with staggering income inequality, xenophobia, the prison industrial complex and a definition of religious liberty that would deny civil rights based on sexual preference,” she said.

Indeed, a poll by The Washington Post discovered that Christians are more likely to view poverty as a result of individual failings.

“Donald Trump is only the embodiment of our current predicament,” Winston said. “He lives and dies by the partisan media, he is responsible only to himself, he feels free to break all codes of socially responsible behavior and he likely would not disagree with those who say that his success bespeaks his blessedness.”

Winston never thought that the media would call the president a liar — but there’s a first time for everything.

At the close of Winston’s lecture, Fallows said he agreed with several of the points she made. Winston responded that they could go drink champagne and talk about it. Fallows jokingly agreed and proceeded to address the pieces of Winston’s talk he felt needed more clarification.

“Are you meaning Reagan and his imaginary to be a change from the FDR through LBJ period, or really something new on the American scene?” Fallows asked.

Winston joked that she couldn’t give her book, The Oxford Handbook of Religion and the American News Media, away in one sitting, but she had a more serious response as well.

“I think that in order for most states to function they need to believe in something beyond the material,” she said. “What’s so interesting about the American experiment is that we were the first country that had separation of church and state, so we did not have a divine sanction.”

Fallows wanted to know if this tension between individualism and communitarianism could be waited out. Winston responded that lots of pieces needed to fall into place first.

“You need a president or leader who can strongly enunciate vision, you need people on the ground meeting in churches and synagogues and mosques, talking about making things different,” she said. “You need people organizing to take over local governments as the religious right did throughout the 1980s and ’90s.”

And finally, Fallows was curious as to what types of people are going into journalism. Winston spoke about what she saw in her students at the University of Southern California.

“They are going into journalism because they think that they can make a difference, that they can talk truth to power, that they can afflict the comfortable and comfort the afflicted, she said. “Their bellies are burning, and they’re there because they believe telling stories is a way to change hearts and minds.”