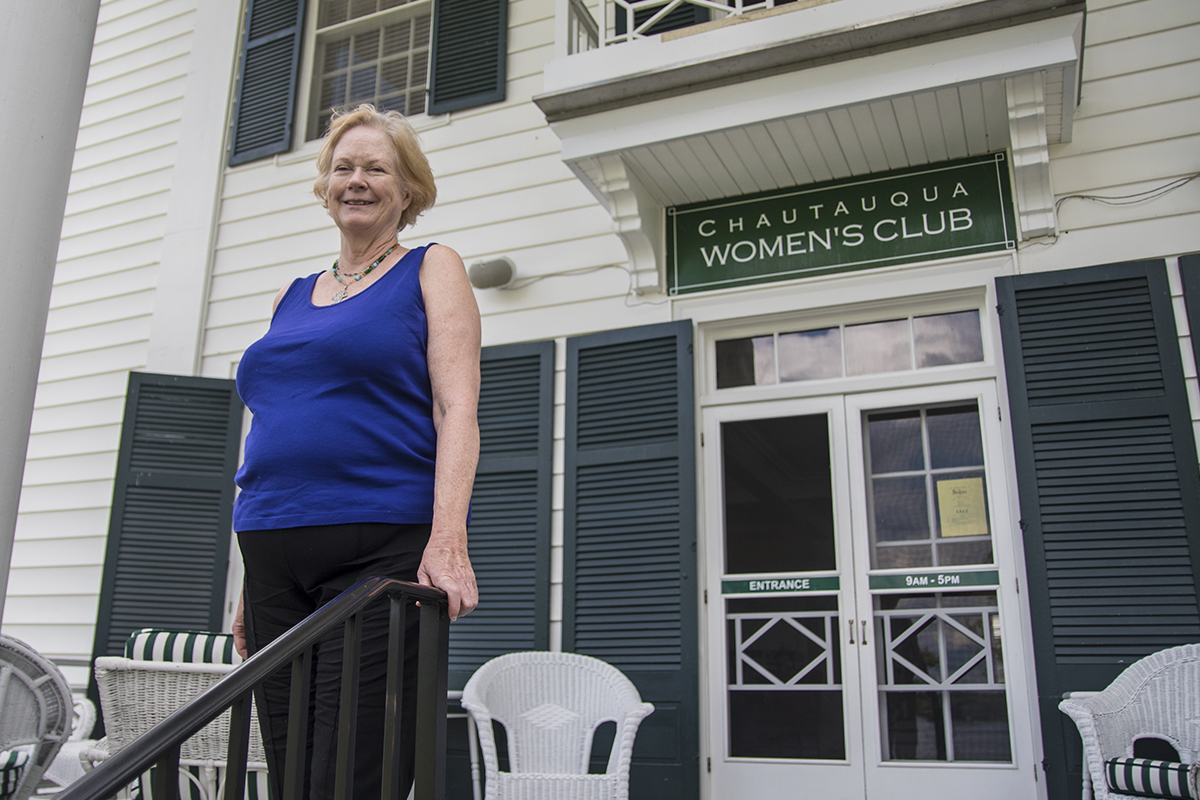 As Elizabeth Sullivan’s first season as the president of the Chautauqua Women’s Club draws to a close, she is focusing on next summer’s opportunities and responsibilities. They include the Contemporary Issues Forum, which was established to “advance knowledge in a variety of areas, such as social issues, education, history and recreation.”

Each Saturday afternoon at 3 p.m. in the Hall of Philosophy, Sullivan has been introducing the weekly CIF speaker, who more often than not has traveled a considerable distance and has never been to Chautauqua.

This season’s CIF roster was compiled by Sullivan’s predecessor, Nancy Griffin Shadd. With the sole exception of the Vackar Lecture, it now falls to Sullivan to choose the CIF topics and speakers for next summer.

“I would like the Contemporary Issues Forum to have more women than men as speakers,” she said. “I would like women who are doing important, impressive work and can describe it well. … I want to highlight it; make sure the world knows what women can and are doing.”

Sullivan excels at program design and development, institution building and strategic planning, and building philanthropic partnerships. Since 2003, she has been doing all of these and more from the perspective of an organizational and political consultant to nonprofits tackling education, environmental and social justice issues.

After majoring in philosophy and urban affairs at Dickinson College, she earned a master’s degree in urban and regional planning at The George Washington University.

She then spent a decade designing and directing hundreds of political campaigns — including those of U.S. Senators Barbara Boxer and Patty Murray — at Campaign Design Group, where she was managing partner and CEO.

“My career has been an intersection of policy and politics,” Sullivan said. “I have helped elect almost 200 candidates from city council to U.S. Senate. I’ve worked for a lot more than that, but those are the ones I helped get elected. And then after a while I got tired of the life of a campaign, and it’s exhausting. I had a young child, et cetera.”

Grounded in philosophy and urban planning, as well as politics, Sullivan entered the world of professional advocacy.

“It’s policy, and certainly some research, but what I really was doing was advocating for policy points of view,” she said. “So I had to know enough to be able to analyze them. And that sounds like lobbying, but it wasn’t really lobbying.”

Sullivan next served as executive director of the League of Conservation Voters Education Fund, where she said she ran the nonprofit side. Initially her annual budget was $600,000.

I would like women who are doing important, impressive work and can describe it well. … I want to highlight it; make sure the world knows what women can and are doing,” Sullivan said.

“And one day we got a grant for $20 million dollars, and some of it had to be matched,” Sullivan said. “So suddenly we grew very, very rapidly. And we went from working nominally in maybe a dozen states to working much more intensively in — I think at the peak we were in 38, 39 states. … We did what I think was really great work because we were able to grow that fast, and work in all those states, and keep it state-centric, and that to me is very important.”

According to Sullivan, there were not nearly as many groups focusing on state government issues as there were on federal issues. The LCV tailored its advocacy to environmental issues that were at the top of each state’s list. For example, in New York the primary challenge was water quality; in Ohio, smokestacks and brownfields; in Colorado, wilderness; in Montana, copper mining; in California, car emissions.

After seven years, Sullivan was ready to move on. That’s when she began working on education, environmental and social justice issues as an independent consultant. Although her base was and is Washington, D.C., her work has taken her to “all sorts of places” for months at a time.

In some of the organizations she advised, Sullivan assumed leadership positions. She said the nonprofits she ran were 501(c)(4)s, not 501(c)(3)s, meaning they were legally classified as social welfare organizations or civic leagues, and were tax exempt under Internal Revenue Code section 501(c)(4).

These nonprofits were often associated with a political action committee. PACs pool campaign contributions from members and donate those funds in order to campaign for or against candidates, ballot initiatives, or legislation.

Sullivan said she sought to keep elected candidates accountable to those who elected them. Again, most of her advocacy was at the state level, including with many state legislatures.

“During the campaign you tell them what you hope they’re going to do,” Sullivan said. “They say they are or are not going to do it. You support them with the PAC if you think they’re going to be good on your issues. They get elected. Do they do what they said they were going to do? So, you keep a scorecard. And do some lobbying. I never (lobbied), but I had people who worked for me who were lobbyists.”

From 2006 to 2010, Sullivan also founded and became president of Education Voices of America.

“I was very concerned about inequity in America,” Sullivan said. “I think that a lot of where that starts is in the education system. The kids who come from poorer families go to schools that are less well equipped and probably almost always underfunded, and they have more serious needs than some of the other kids who go to better funded schools that are supplemented with strong PTAs and so forth.”

Sullivan came to the field of education policy as an advocate of “equitable” funding, which she said is not necessarily the same as equal funding.

“It means making sure every child gets an excellent education,” she said.

She also knew that education-related decisions were largely made at the state, rather than the federal, level.

“The federal government’s role in education is primarily civil rights and equity,” Sullivan said. “But it has to be implemented by the states, so I started organizations in … five states.”

In addition to founding organizations in Ohio, Pennsylvania, New York, Delaware and Massachusetts, she said she supported them and handled their “back office” responsibilities.

She also helped them make policy decisions, raise money, and do whatever else was needed.

“And finally I realized that we had a pretty expensive office in Washington, D.C., that wasn’t really doing the work,” Sullivan said. “What we were doing was good, but it would be better to spin the organizations off.”

Currently, Sullivan is a “consultant of a different sort.” She said she takes on about three major projects a year. For instance, she’s been serving as an interim executive director for nonprofit organizations that are experiencing a gap between their former and future director.

“I go in and I help them do an analysis of where they are, what they’ve done, what their strengths are, meanwhile keeping the trains running on time,” Sullivan said. “I only work about 30 hours a week, and maybe a three- to six-month contract, so they’re still hungry to get a real executive director. … It’s a way to use all the skills I’ve developed running a lot of organizations, and help them move on to their next level.”

At some level, she said, the Women’s Club is one of her three clients. She has also been lending her organizational and strategic planning expertise to the board of directors of two nonprofits — Ocean Champions and Higher Heights.

In addition, Sullivan has been doing some teaching. This season during Weeks Three and Five, she taught a Special Studies course — “Ethical Perspectives on Economic Inequity.” Last summer, she taught a similar course during Week Two.

And on the side, she has been doing some editing and writing.

Sullivan’s most substantial writing project is her doctoral dissertation. At Georgetown University, she is a candidate for an interdisciplinary doctorate in liberal studies.

“I was feeling a little bit like the work I was doing was challenging and interesting, but it was exercising muscles I already had pretty well developed, and I wanted to learn about stuff that I knew nothing about,” Sullivan said. “And really go into a deeper analysis of thought. It’s really about an intellectual thought process and trying to figure out, ‘How did we get here? Who are we?’ ”

At Georgetown, she said she’s been able to take classes she loves with professors she greatly respects.

“I know you’re not supposed to be able to do this after a certain age, but I swear I’m smarter than I used to be because of this,” Sullivan said. “It made me turn on different brain areas or something. All of the sudden I’m trying to compare the covenant with Abraham and modern-day economics, and that’s just a different kind of analysis and thinking.”

As Sullivan looks forward to next summer’s CIF program, she’d like people to know that the CWC welcomes everyone.

“I see there are two kinds of clubs in this world,” she said. “There’s one that’s kind of a closed-off club, that we belong to and you don’t. … Once you’re a member, you’re inside. And, there’s the other kind of club which is, ‘Come join us; come be part of us.’ I would like the Chautauqua community (to know) that we’re the second kind of club. We’re not an exclusive group.”