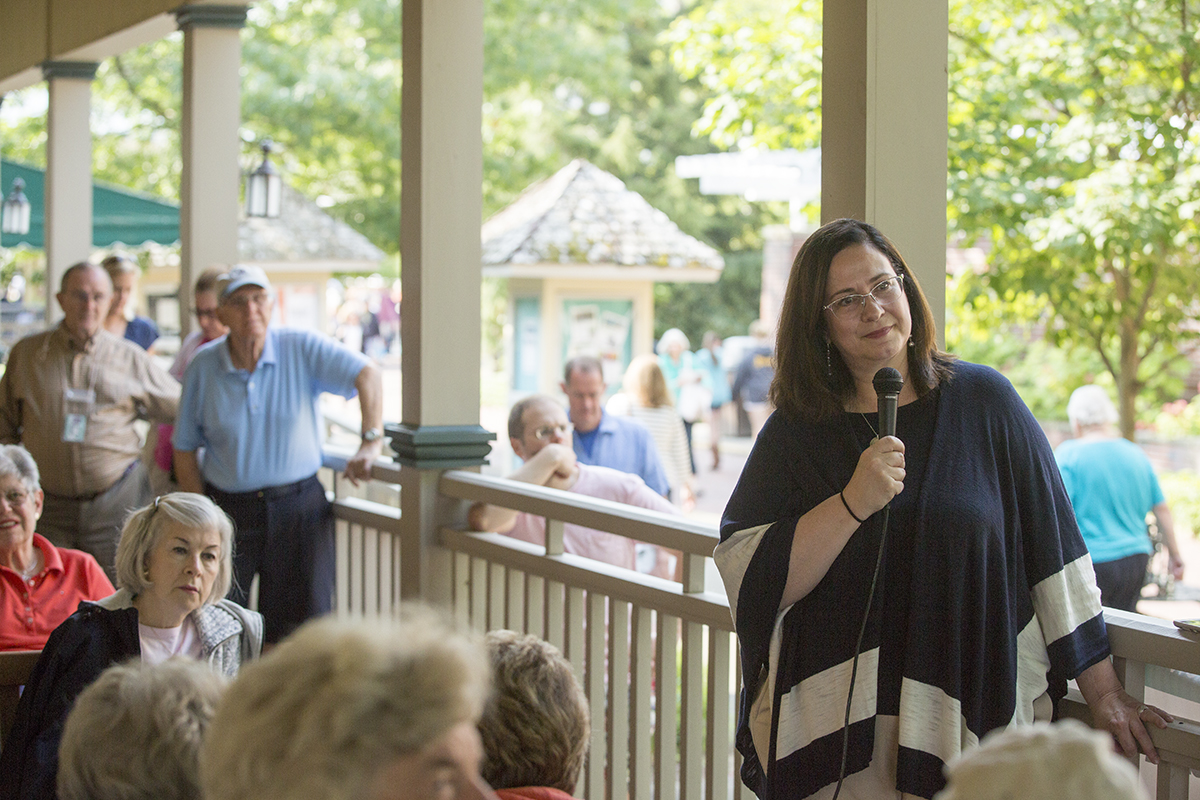 Emily Morris spent the morning of her 101st day at Chautauqua Institution as the featured speaker at the Institution Leadership Porch Discussion, speaking on the topic of “Attracting and Retaining Chautauquans.”

In her talk Wednesday at the Hultquist Center, Morris, the new vice president of marketing and communications and the Institution’s first-ever chief brand officer, reflected on observations she shared with the board of trustees in May. In doing so, she also shared how those first impressions had changed since then.

“There is no doubt that there is a tremendous love for Chautauqua Institution across many constituencies who consider themselves Chautauquans,” Morris said. “But I also noticed that there may be a love-hate relationship in some circumstances, in terms of changes that we’re making at the Institution.”

For Morris, communication — not just about programming and events, but the vision of the Institution — is key. She emphasized the need for “segmented communications” in order to more effectively reach the “various audiences” at the Institution. Those audiences include homeowners, renters, first-time visitors and members of the surrounding communities.

And in addressing change, Morris said that she’s working with departments across the Institution to make changes that “not only embrace and cherish the people who consider Chautauqua their home for either the entire season or some portion of the summer season, but also folks who may not know Chautauqua at all or even understand what it is.”

Morris noted that there’s been a decline in visitors from Cleveland, Pittsburgh and the western New York/Buffalo areas, which she said were historically the Institution’s “primary draw regions.” Coupled with that comes a decrease in “name recognition.”

“We have been a little bit too democratic with the way we present Chautauqua to the world,” Morris said.

She referenced Shaun King as an example, sharing that a news outlet from Buffalo contacted her after his morning lecture saying that they were completely unaware that he was speaking at the Institution. Another local station, NBC affiliate WGRZ, did make it to the lecture and interviewed King.

“In order to be able to go to market in a way that is consumable to our communities,” Morris said, “we need to have the courage to let our tall pulls, if you will, our leading programs, get the attention of our audiences.”

Compared to May, when she said she found the Institution to be “risk-averse and resource-constrained,” Morris said that she’s since then seen a “willingness to take good risks in the interest of moving the brand needle for Chautauqua, growing our census annually and reaching a larger, more diverse population.”

In looking to retain Chautauquans, especially first-time or sporadic visitors, Morris said that her department has installed digital signage across the grounds and created social media content to better inform and showcase current and upcoming programming at the Institution. They’ve also been testing a cellphone app that is slated to launch next year. Improving parking accessibility has also been a priority. The dimly lit lots that are not particularly close to the grounds have been seen as a deterrent or downside to visitors. A dinner shuttle was recently created that transports guests to and from area restaurants and the grounds for the same cost as parking on the grounds.

In further developing the Institution’s brand awareness, Morris said, her department is also working on creating more partnerships and improving technology, from a more robust online presence and better Wi-Fi, to digital kiosks for ticketing on the grounds. Belly, a digital loyalty program that lets users earn points to redeem rewards, was introduced at the Brick Walk Cafe, Chautauqua Bookstore, Chautauqua Golf Club, Turner Fitness Center, Chautauqua Fair Trading Co. and Heirloom Restaurant. Those in attendance expressed that though they frequented the bookstore and other participating locations, they hadn’t been informed or asked to sign up for Belly.

Morris then spoke more about her role as chief brand officer, a new title under President Michael E. Hill.

“He understands that anything that touches the customer experience has implications on the brand for Chautauqua,” Morris said. “He wanted to give me the opportunity to engage collaboratively with individuals across the organization, including our foundation and other affiliated organizations, to make sure that we’re very much aligned in all that we’re doing to represent Chautauqua in our mission and vision to the world.”

This year, a total of 47 events will be livestreamed by the end of the season. A new online platform to host the programs is in development that will be a departure from uploading content on YouTube. Morris feels as though a “significant media partner” would be instrumental in giving content “a life beyond the nine weeks.”

“We also know that we need to do more than just record these programs and put them up online for people to use,” Morris said. “We need to be able to curate this content in a way that’s going to draw people in and keep them engaged and perhaps drive them to other types of content that we create at Chautauqua.”

Morris seeks to create and distribute content that can be used at colleges, universities and lifelong-learning institutions through “learning management systems,” which she said is the “portal to their academic enterprise.”

Morris said that the Institution is a community rather than a “transactional” destination, though she admitted that they don’t outrightly promote “the community aspect as an attraction feature.”

Another community member from the Chicago area expressed his desire to figure out how to connect with Chicagoans who come to the Institution during and outside of the summer season. A program called the Chautauqua Advocates is already in existence. According to Vanessa Weinert, marketing manager, the program helps Chautauquans connect with other Chautauquans in their area, and others, to organize dinners, cocktail hours, meetups, mini-lectures and other gatherings.

“You absolutely are an important army — you’re our marketing team right here on this porch,” Morris said.

Morris said the Institution is actively working to combat the notion of being “a place for rich people that is not welcoming to the local community” and changing the perception of “gates as barriers into gateways,” something that Hill touched on in his opening Three Taps of the Gavel address. Dynamic pricing, a strategy that would allow the Institution and potentially property owners and renters to adjust pricing according to demand, is being assessed by the marketing department.

According to Weinert, accommodations outside of the hotels are privately owned and not under the scope of their department. The recent creation of different hotel packages has increased bookings at the Athenaeum Hotel.

Though it requires taking a critical look at how the Institution has been and seeks to function, Morris said that she is committed to bolstering the Chautauquan brand.

“You don’t change impressions overnight,” Morris said. “It’s just like a brand; a brand is owned in the minds of your constituents. It’s their emotional, physical reaction to an organization or an image or a message.”