One of the questions asked of Chautauquans who live here all year (sometimes called Winter Chautauquans or year rounders) is “What do you do the rest of the year?” Children go to school and adults volunteer to tutor students. People go to the library to play games or read, to the post office to see the friendly staff. We go to church and synagogue or other religious activities. There are at least three book clubs, a bowling league, and a play reading group. Chautauqua County in the fall is beautiful, and there are numerous harvest festivals around the area.

We are not untouched by the events of the world beyond the gates. As many Chautauquans return to the centers of commerce and government, we follow the news of the day as much as others do.

When New York State “paused” to slow the spread of COVID-19, we paused. But there were many, as elsewhere, who went beyond staying physically distant and quarantined and tried to make life better — and in Chautauqua, youth and young adults stepped up to make life a little better for everyone.

Acts of Kindness
The stones began to appear about the same time that residents of Chautauqua began to shut themselves inside during New York State’s pause to combat the novel coronavirus. Left around the grounds or on people’s doorstep, the stones were painted with messages like “Faith,” “Believe,” and “We are in this together.”

These acts of kindness were the idea of the Taliercio triplets — Landon, Fynn and Ethan. When their school closed in Cleveland, they came to Chautauqua to stay with their grandparents, Mike and Marg Metzger.

The triplets’ parents are doctors. Their regular caregivers were not available so the boys spent the weekdays on the grounds and would go home on weekends. “It was kind of annoying to have to switch houses. We were not used to going back and forth,” said Fynn.

Ethan said, “Grandma suggested we do something to help seniors who were at home and did not have much to do and might be feeling down. We all decided to paint rocks.”

Fynn had seen an article about a rock painting club in Ohio. Landon came up with an emoji for circular rocks. He would draw the faces.

“We got the rocks at Barcelona Beach,” Landon added. They liked the rocks that washed up on the beach, as they have a smooth surface to paint on.

They painted many “doctor” rocks, with the face of a doctor on them. Their parents would take them to work and give them to colleagues.

The triplets walked around Chautauqua, putting rocks by people’s doors, on Bestor Plaza, in trees. One rock even got to the top of the fountain in Bestor Plaza, although they never figured out who put it there.

While they have been playing baseball, sailing and exploring the ravine by Boys’ and Girls’ Club, they said they miss Club — especially the Club Carnival.

In all, the boys think that they painted between 50 and 75 rocks. Ethan used the stones as part of his final fourth grade project and called the project “Acts of Kindness.” They also included their cousins, Michael and Reagan, in the project.

“It was a way to make people feel joyous,” Ethan said. “It was like giving them a candle in a dark room.”

Community Service
The day after school finished on June 11, Josie Dawson and Eve Kushmaul, who live in Chautauqua year round, decided to do some community service — cleaning up the dog park near the Turner Community Center.

Josie and Eve had been walking a neighbor’s dog up to the park and noticed that “it was overgrown with plants on the fence,” Eve said. So they decided to fix it up.

“It took a while to make some progress,” she said. “We worked every other day for about two weeks.”

Asked if there was any poison ivy, Josie said that “there was, mostly up in the corner where the dogs like to hang out. We had to wear long sleeves and gloves and long pants to protect ourselves.”

Mostly there were vines wrapped around the fence and thorns on a lot of the plants. The girls found some holes that dogs were digging under the fence and they worked to refill the holes.

“It makes me proud that dogs can come here more safely. I was disappointed to find a pile of rotting tennis balls and dog poop in one corner,” Josie said.

Another added amenity is a treat bucket. “We would run out of treats, so we got a canister and filled it with dog treats,” Eve said.

They said that the dog park should be a priority for Chautauqua. “The dogs need a place to go and play,” Josie said. “It needs more work, but it is still a very fun place, and will become better.”

Eve likes to come to the park and sit on the large pipe with some water when she is bored. This summer she has taken a break from violin lessons and is studying piano. Josie decided to “just wing it and go with the flow.”

The girls made another addition to the park — a stone, painted purple with “BLM,” for Black Lives Matter, painted in gold on it. The idea came from both of them. “We thought it would be a good spot because a lot of people come here and we made it big so they will see it,” they said. They used a rickety old wagon to get it to the park.

Black Lives Matter
Regan Sims is a theater actor, trying to figure out what to do next. “I want to continue the work to be bold and brave and reflect the times I am in, like Nina Simone (did). I want to be bold and rock the world. As an artist and person, she reflected her times,” Sims said.

Sims is part of a mime troupe that does virtual content for kids and is teaching a high school summer camp class on acting via Zoom. She is finding her voice in this time of a pandemic and civil rights protests.

She led a protest for Black Lives Matter on June 19 in Bestor Plaza. Over 200 people came, masked and physically distant, to lend their support to the movement.

A life-long Chautauquan, Sims’ family has owned the Rose Cottage for several generations.

“It was a joyous protest,” she said. “With COVID-19, we think about staying inside. Life goes on and it can be tragic, but it is also invigorating, New things are happening that I did not know I could be a part of. I am finding my voice.

Sims talked with her sister, PJ, and they decided they had to do something. Regan was the speaker. PJ did the groundwork of getting the message out.

“There are not a lot of people here who look like us, and that was the reason we needed to do this action,” Sims said. “We have felt on the outside looking in. And we stand out. I have a voice and want to be heard where I stick out.”

PJ came up with the idea of chalk messages on Chautauqua’s streets and sidewalks to get the word out about the gathering.

On the day of the protest, there were thunderstorms all around the lake, booming in the distance, but the rain held off at Chautauqua.

Sims had bullet points she wanted to make in her speech, but it turned into a heart-felt, slightly rambling talk as she said what she needed to. She thought five people would show up and the whole thing would last five minutes.

“I was leading from love but there were some points I wanted to make. First, we were meeting to protest the death of George Floyd and others. Second was to say the names of those others killed. And third, was to protest police brutality and the lack of systemic empathy and love,” she said.

She continued, “It is our job to be out in the streets and the desire of everybody to show up for their neighbor and love their neighbor as themselves. I can’t imagine how mothers feel — parents, sisters, brothers, children.”

Sims said reactions to her, PJ and their brother Joey have been different since the protest. “The conversation has changed. People say, “I know you,’ and start talking to me,” she said.

“People can talk all day, but what are you doing?”

Her dream for Chautauqua is that it would be more of a reflection of the world. She would like changes to systems “that have oppressed people since the dawning of America.”

“I am not afraid of the work and the tough conversations. I want hearts to be open and to chip away at collective insensitivity,” she said. “I don’t want to be scared anymore. I don’t want to fear. I want to push through the feelings. That is the work.”Her latest project, A Kid’s Play About Racism, streamed on Broadway on Demand, Zoom and Theater for Young Audiences/USA the first weekend in August. The play was adapted by Khalia Davis from Jelani Memory’s book A Kid’s Book About Racism. 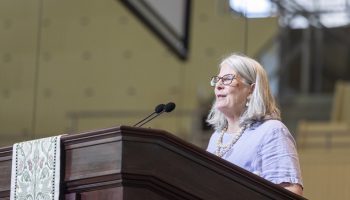