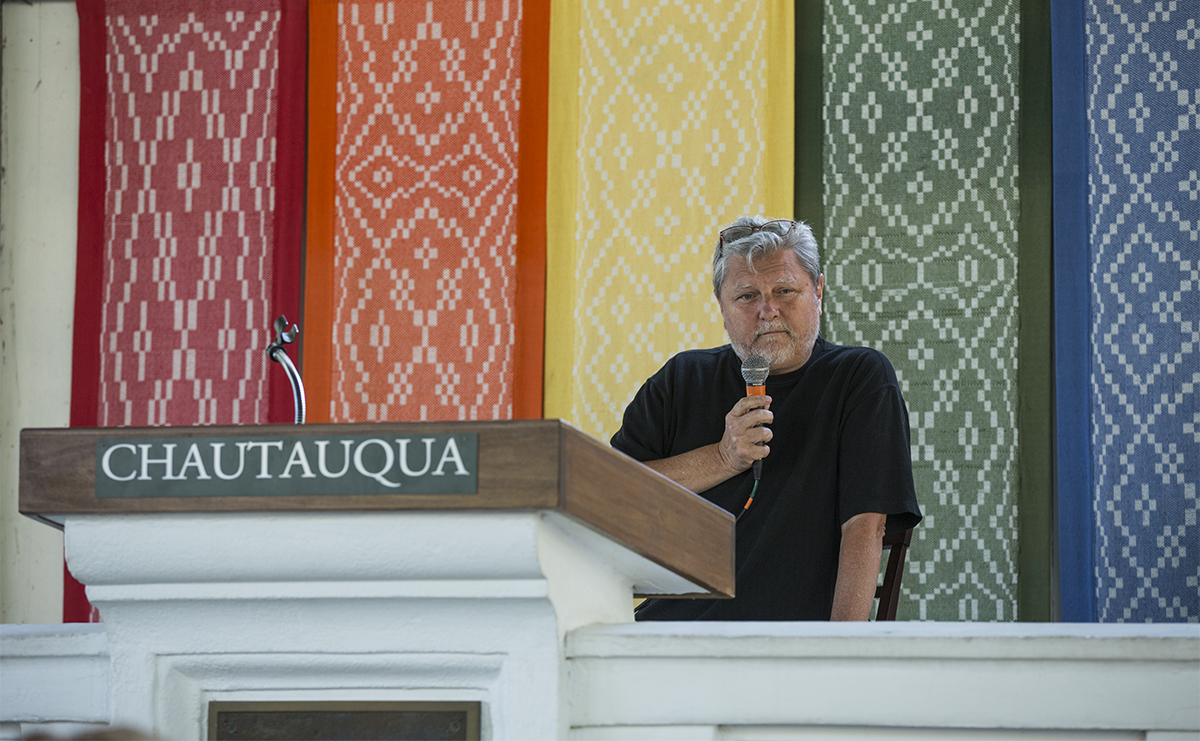 Artemis Joukowsky III, co-director and co-producer of the film “Defying the Nazis: The Sharps’ War,” discusses the role his grandparents played during World War II on Tuesday, Aug. 8, 2017 in the Hall of Philosophy. CAM BUKER/STAFF PHOTOGRAPHER

Artemis Joukowsky III began his lecture by asking the Hall of Philosophy audience to close their eyes — or keep them opened, whatever they preferred — so he could pray for direction.

“God of all people, all nature, all creation, we come before you — you, in this day, to ask for the healing of our hungry, hurting and war-weary world,” he said. “We come confessing our deep divisions and our failure to make peace a priority in our hearts, in our families, in our communities, in our nation and in the world. … We come in prayer. Our sorrow for lives lost and hearts broken overwhelm us. We turn to you, we turn to us and we make us all the agents of our peace.”

Joukowsky, the grandson of Unitarian aid workers Waitstill and Martha Sharp, then proceeded with his Tuesday lecture, “The Liberation of the Human Spirit,” part of Week Seven’s Interfaith Lecture Series, “Spirituality in an Age of Anxiety.”

But before he could get to the heart of his talk, an iPhone ringtone played over the speakers: It was his daughter calling. Joukowsky apologized; she didn’t know he was speaking at the moment.

Getting back to his speech, Joukowsky philosophized that love — of family, friends, institutions, churches, communities and the world — is equivalent to liberation.

“Imagine having a love of the world that was so big that every child that was suffering around the world right now, we ached … we ached,” Joukowsky said. “Imagine how painful that would be.”

His daughter, he said, is already sharing in Joukowsky’s love for advocacy.

“She has challenged her entire generation to post (on Instagram) not their bikini picture, not their ‘I am in the sun all day doing nothing except myself all day’ picture, but, no — ‘This is the beach I cleaned up,’ ‘This is the friend I went and visited,’ ” he said.

Her activism is thriving through her hashtag #gorock. Joukowsky’s is seen through his film “Defying the Nazis: The Sharps’ War,” which he co-directed with filmmaker Ken Burns. The documentary follows the story of his grandparents, the aforementioned Sharps, who pursued dangerous mission work in Europe from 1939 to 1940.

The Sharps were the 18th Unitarian Universalist ministers to be contacted by the American Unitarian Association and the only pair who said “yes” to the posting in Prague. Joukowsky said in Jewish numerology, though, the number 18 symbolizes life. The couple left their children under the care of Unitarian Universalist friends and went abroad.

“Little did they know when they arrived in Prague, they were arriving into the ‘kingdom of hell,’ literally,” he said. “If there is a hell, it was that period in the whole central Europe.”

This was not a vacation, Joukowsky said. His grandparents were tasked with helping refugees regardless of their nationality, religion or background. As the Talmud, the Quran and the Bible all declare, “To save one life is to save humanity.”

“All the people my grandparents worked with were part of the underground and the Quakers and the Unitarians and this group of dissidents who believed that human life was important to save,” Joukowsky said.

During their time overseas, the Sharps made approximately 400 to 500 documented rescues. Almost every week, Joukowsky receives phone calls from people making statements like: “Your grandparents helped buy an $8 ticket to Genoa, and from Genoa we got to Shanghai, and now, we want to thank you.”

After returning to America, the Sharps, who had previously declared themselves pacifists, advocated for the United States’ involvement in World War II. And though a lot of the work the Sharps did was “unromantic,” it saved thousands of lives. One of their most common rescue tactics involved bringing professors, economists and writers to the University of London for visiting professorships. This alone helped 1,000 academics, and the Sharps didn’t stop there — anyone who was considered “other” was under their wing.

“Imagine my grandfather: a Unitarian, a Harvard Law School graduate, is in the back of a basement taking in money, but this is what he does,” Joukowsky said. “The person who is most desperate — and at that point, they identified that as being Jewish — would get the best rate of exchange, not the worst rate of exchange.”

Instead of being anxious over what they could do, Joukowsky said the Sharps were “overwhelmed by what they couldn’t do,” always hoping to find and save “the endangered.”

“(The Sharps’) work (was) never acknowledged because Unitarians, really most by nature, don’t market themselves very well,” Joukowsky said. “It’s kind of part of the religion. We just want to be wanted; we just want to be part of your lives.”

Imagine having a love of the world that was so big that every child that was suffering around the world right now, we ached … we ached,” Joukowsky said. “Imagine how painful that would be.”

When he was in school, Joukowsky received an assignment to “interview someone of moral courage.” He asked his mother whom he should talk to, and she told him to get in touch with his grandmother.

“Little did I know, this woman had literally outwitted the Nazis and did this remarkable work, and she had never talked about this story,” he said.

For example, in the Sharps’ travels to southern France, transportation became complicated and delayed, so upon their arrival, their visas displayed the “wrong” expected date. With them was a shipload of milk for children. When they approached the border guard, Martha Sharp asked him: If this milk was for his child, would he let the shipment in? The guard said yes.

When Joukowsky interviewed her, Sharp encouraged him to be more courageous.

“What are you going to do that’s great in your life?” she asked.

“Well, how about graduate from the eighth grade?” he quipped.

“No, no,” she said. “We’re talking about something greater than that — what is your spirit? What are you here to do?”

Through a “complicated promise” to his grandmother, Joukowsky wrote his book, also titled Defying the Nazis: The Sharps’ War. He dedicated it to all of the people who could not be saved, in the spirit of “their potentiality” and “the liberation of the human spirit.”

His challenge to himself was to determine what would push him out of his comfort zone, to go deeper, to make something that touched on the big issues — slavery, genocide, the civil rights movement.

“I became interested in stories of courage, and where were they?” he asked. “They were everywhere. Police stations, schools, hospitals — those are the places you find them most readily.”

When people can consider their connections rather than their separations, goodness will follow, Joukowsky said.