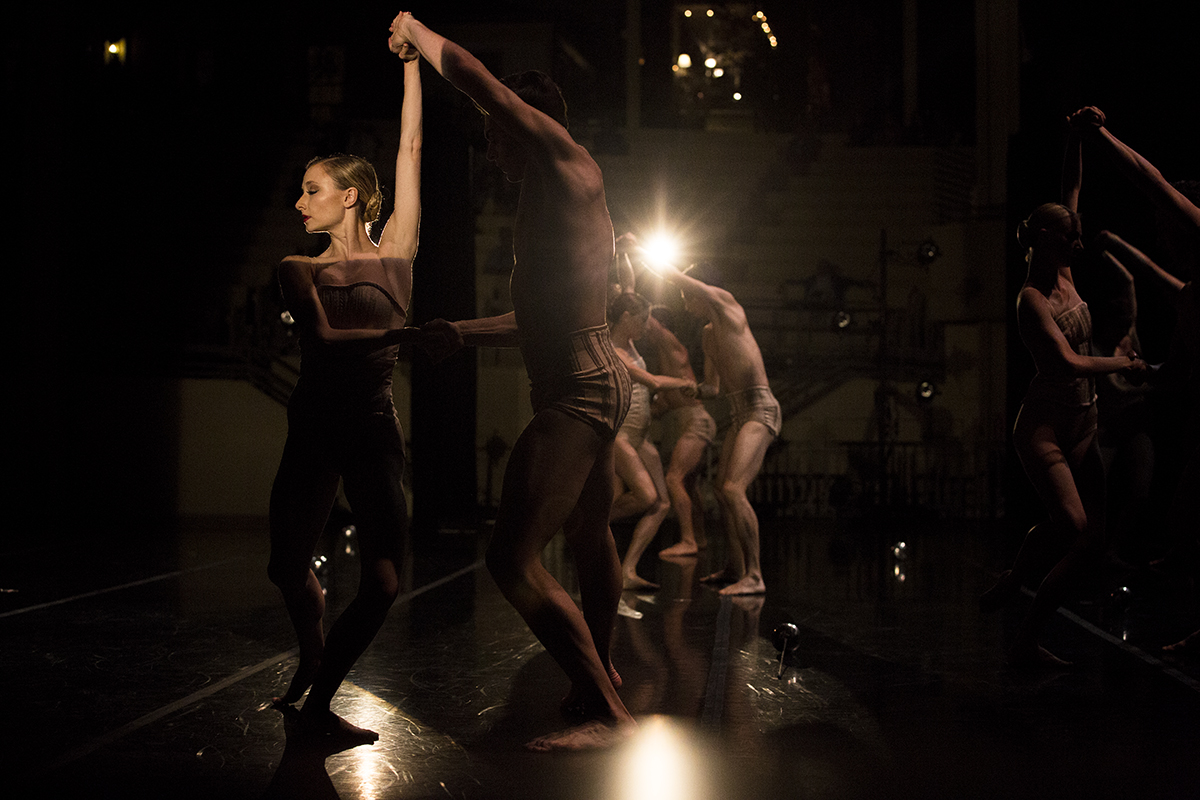 Last at Chautauqua in 2013, Pittsburgh Ballet Theatre, for its return to the Amphitheater Saturday night, came with a program loaded with the type of dance fare Chautauqua dance audiences love to devour: classical and classic.

The program opened with divertissements from “Le Corsaire” (“The Pirate”) with choreography after Marius Petipa and Konstantin Sergeyev. Loosely based on “The Corsair,” a poem by Lord Byron, the ballet has been often maligned for its somewhat convoluted storyline of pirates and slave girls and conversely celebrated for its jam-packed bravura dancing. PBT artistic director Terrence Orr gave us the latter, culling together many of the ballet’s best bits from its first two acts danced by a bevy of the company’s star dancers. The result was like a meal of desserts — indulgent, but oh so satisfying.

The bulk of the divertissements featured the ballet’s two main characters: Conrad, a pirate, and Medora, a Greek slave girl that Conrad kidnapped, fell in love with and ultimately freed. Each divertissement was danced by a different PBT dancer alternating in those roles, beginning with Ruslan Mukhambetkaliyev as Conrad rousing his pirate band. Into that scene came the dance of the three odalisques performed with grace and reserve by Danielle Downey, Jessica McCann and Diana Yohe. The delicately beautiful trio spoke to the high caliber of dancing and choreography that would be prevalent throughout the evening. Of note was Downey’s sweeping demi-solo performance highlighted by a flurry of eye-catching leg beats.

One after another, the divertissements got more exciting and technically demanding. And while the CSO’s playing of the (and others) score was inspiring, owing to only one rehearsal with PBT, the slow tempos in spots left several of PBT’s dancers noticeably struggling to pace their dancing and hold poses. Despite that, the pairing of the groups was sparkling, especially later in “Coppélia.”

Of the many fine performances by PBT’s dancers in the “Le Corsaire” excerpts, none were more radiant than that of principal dancer Julia Erickson as Medora, whose gorgeous technique and commanding stage presence wowed the audience in the “Pas d’Esclave” with partner Alexandre Silva. The “Corsaire” excerpts concluded with the ballet’s most famous scene, the “Pas de Trois from Act II” made famous by Rudolf Nureyev as the slave Ali, of which fellow dance critic Alastair Macaulay once described as being “choreographed on him by God.” Stepping into that role for PBT was principal dancer Yoshiaki Nakano, who, along with Hannah Carter as Medora and Alejandro Diaz as Conrad, provided another of the program’s finest moments. While Carter and Diaz were both solid in their dancing and solos, Nakano was textbook brilliant. A more stylistic dancer than, say, Washington Ballet powerhouse Brooklyn Mack, who performed the same role at the Amphitheater on Aug. 4 as part of the Charlotte Ballet-curated “Evening of Pas de Deux” featuring alumni stars, Nakano dazzled in crisp turns and pirouettes and high-flying leaps.

One of the very few 20th-century choreographers to be mentioned in the same breath as George Balanchine, although stylistically worlds apart, Kylián describes on his website the inspiration behind his 17-minute contemporary ballet for six men, six women and six foils. He writes: “Petit Mort is a poetic, and strangely significant way of describing the ecstasy of a sexual intercourse … (and) in that moment of pleasure … we are reminded of the fact that our lives are of a relatively short duration, and that death is never too far from us.”

Kylián goes on to say of the music it is danced to: “I have based my choreography on two slow movements from the two most famous piano concertos by Mozart. I have cut them away from the fast movements, leaving them as mutilated torsos … they lie there, just like some ancient torsos, without arms and legs, unable to walk or embrace.”

Whatever the metaphors are behind its imagery, including the use of the swords by its male dancers as “a show of their potency and power,” the ballet is just flat out heavenly to experience.

It opened in darkness with the recorded low rumble of industrial noise as individual spotlights slowly came up on six male dancers balancing fencing foils atop the index fingers of one hand. Then came the sound of blades slicing through the air as the men set into motion wielding their blades in various ways in Kylián’s elegantly inventive choreography.

Performed to the CD-perfect piano playing of Mozart’s score by PBT company pianist, Yoland Collin, accompanied by the CSO, the ballet played with illusion as a billowing blanket of fabric was quickly pulled over the stage to disguise and then back to magically reveal the entrance of six women lying on the stage floor who weren’t there seconds ago. Adding to the magic of the ballet were six large rolling black dresses whose floor length, and form-hugging bodices, made it appear that the women standing behind them were actually wearing them as they floated like specters across the stage. The illusion was broken to the curious chuckles of audience members as the women leaned themselves away from the dress forms.

Those magical moments aside, the ballet’s real magic came in a series of male/female pas de deux adroitly performed by several of PBT dancers that had the men helping to twist and bend the women into angular poses and lifts looking like the twisting and untwisting of pretzels. The individual pairings popping up one at a time onstage appeared like a waltz of acrobatic hummingbirds briefly flitting about, then disappearing to be replaced by another pair.

Closing out the program were excerpts from Arthur Saint-Léon’s comedic ballet “Coppélia” (sometimes subtitled “The Girl with the Enamel Eyes”) danced to a score by Léo Delibes.

With a pleasing rendition of Delibes’ music by the CSO that helped illustrate and drive the dancing, “Coppélia” was the cherry atop the program of all desserts that proved ridiculously sweet, thanks in large part to the uber-charming performances of PBT principal dancers Alexandra Kochis as Swanhilda and Luca Sbrizzi as Franz; a pair of young lovers.

The excerpts began with the ballet’s opening scene (sans the usual village sets), where both Swanhilda and Franz were fooled into thinking the life-sized mechanical doll Coppélia was a real person. Unbeknownst to Franz, his sweetheart Swanhilda saw him flirting with Coppélia. Kochis’ animated reactions in her character’s confrontation of Franz that followed were priceless. Wielding an endearing mixture of sunny smiles, dismissive hand gestures, eye-rolling and pouting, Kochis owned the character of Swanhilda as if she had stepped from the pages of the two E. T. A. Hoffmann stories — “Der Sandmann” (“The Sandman”) and “Die Puppe” (“The Doll”) — the ballet was based on. To go with their spot-on acting skills and infectious joy, both dancers also had a palpable chemistry together, treating us to some of the evening’s best dancing. Adding to Kochis and Sbrizzi’s performances were several lively folk dances by both PBT and guest dancers from the Chautauqua School of Dance, including a mazurka choreographed by Jean-Pierre Bonnefoux and a ribbon dance staged by Orr.

In a summer dance season that seemed to spoil Chautauqua audiences even more than usual with fabulous dance companies that delivered fabulous performances, Pittsburgh Ballet Theatre and the Chautauqua Symphony Orchestra weighed in with a memorable one.