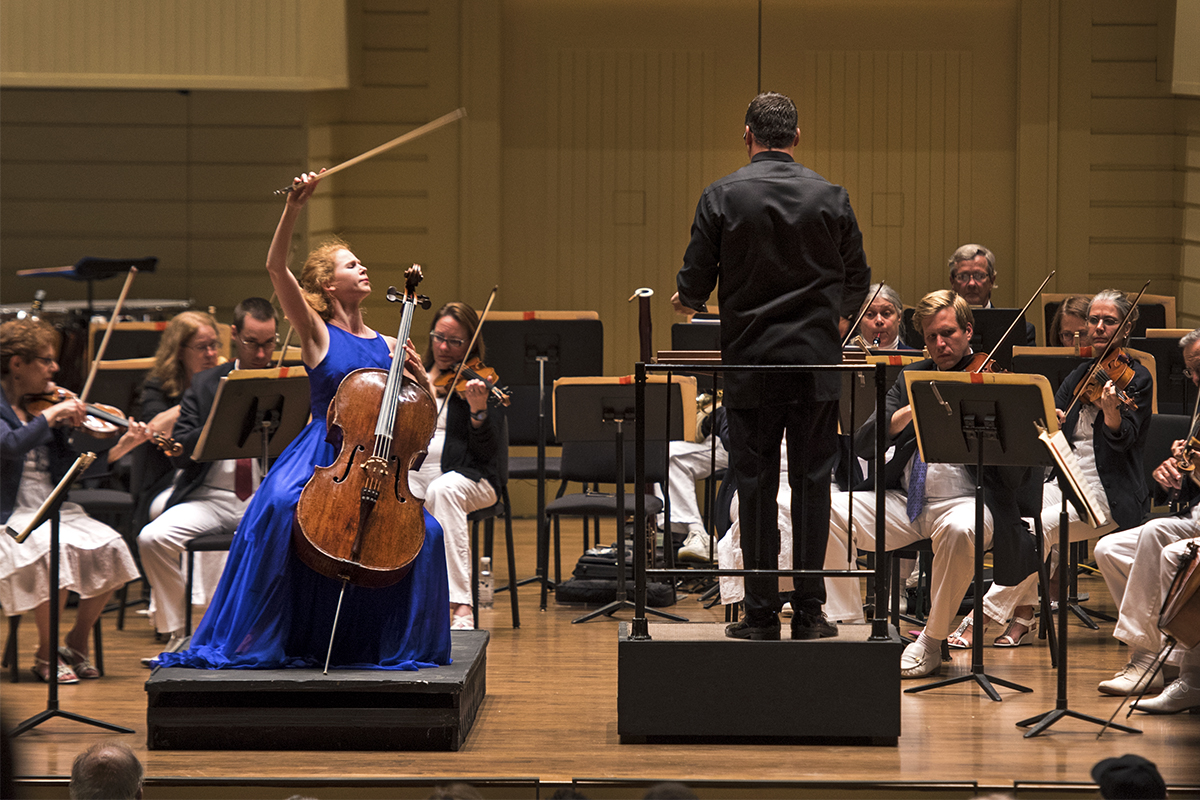 Received wisdom tells us that the great Hollywood film scores were born in Vienna and brought to California by Erich Wolfgang Korngold and Max Steiner. That’s correct but insufficient, as Daniel Boico and the Chautauqua Symphony Orchestra demonstrated Tuesday evening with a sweeping, cinematic performance of Sergei Rachmaninoff’s “Symphonic Dances.”

Rachmaninoff’s last completed work dates from 1940, and it’s fair to speculate that the Russian composer had been to the movies a few times since settling in somewhat reluctant exile from the 1917 Russian Revolution. It’s beyond doubt that the Hollywood demimonde was well acquainted with the Russian composer’s music; as a virtuoso pianist in the 1920s and ’30s, he was a bona fide celebrity.

Israeli-born conductor Daniel Boico was well equipped for the deep Slavic character of the piece. Boico studied with Ilya Musin at the Saint Petersburg Conservatory, where the 10-year-old Rachmaninoff was admitted as a student more than a century before.

Boico kicked the work off with an intensity and bite reminiscent of another Russian who composed widely for film: Prokofiev. The yearning second subject has the melancholy character of a Russian folk tune, but Boico eschewed vulgarity, sculpting its long line with a clear, dry eye.

The stop-and-start waltz of the middle Andante movement could have been the soundtrack for a will-they-or-won’t-they scene from a Billy Wilder film, alternately acerbic and swooning. Boico conducted it with the grand, sweeping gestures of a screen maestro.

The final movement was an adrenalized rush through the two sides of Rachmaninoff’s nature. The “Dies Irae” theme with which he had been engaged his entire career did battle with the chant “Blessed be the Lord” (“Blagosloven yesi, Gospodi”) from his “All-Night Vigil” for chorus, death and resurrection. In the end, the latter was victorious as the work came to a breathless conclusion. Boico let the tam tam ring out, anticipating Shostakovich, who used the same effect in the shattering conclusion of his Eleventh Symphony. It was a thrilling gesture and a bravura performance.

As the final movement began, it wasn’t hard to picture the CSO on a Hollywood soundstage.

The Dutch-born Harriet Krijgh strode onstage with the rangy, loping grace of an Olympic high jumper. She certainly gave a kinetic reading of Haydn’s evergreen Cello Concerto in C. That Krijgh fully embodied the music was evident before she played a note. From the orchestra downbeat, she swayed to the rhythm, and when she picked up the jaunty melody, she did so with a spring in her step. The gentleman seated next to me caught the feeling and hummed along, and who could blame him when the music was this joyous? In the second movement, Krijgh aimed for expressivity over note-by-note accuracy, employing a wide dynamic range. Boico kicked off the Allegro molto finale at nearly a presto, and Krijgh seemed delighted by the challenge, digging into her part with an enthusiasm that almost made you forget the sirens that wailed for the half the movement. She is a performer of radiant personality and hers was a thoroughly charming performance.

The evening began with Respighi’s “Trittico botticelliano.” It’s not great music, but credit Boico with turning the Italian composer’s apulian primitivo into vintage Ravellian grand cru Bordeaux. Boico, who was raised partly in France, where his father was concertmaster of the Orchestre de Paris, got a full sound from the CSO, colorful but never garish. This was Botticelli, after all, not Derain. Boico’s use of a somewhat larger string complement than the work calls for might have been a response to the acoustics of the Amp or more likely an artistic decision, but it worked. The opening “La Primavera” movement bowed to Vivaldi with its trilling violins and nicely rustic wind colors. The movement inspired by “The Adoration of the Magi” unfolded with tenderness and glowing reverence, again with wind passages that were characterful, if not always flawlessly executed. In the final movement, Venus emerged on her half-shell surrounded by a nimbus of string tone, an enchanting picture and a fitting end to a performance that was full of ideas.

John Chacona is a freelance writer and producer in Erie, Pennsylvania, who writes about culture for the Erie Times-News. Follow him on Twitter
@JohnChacona.