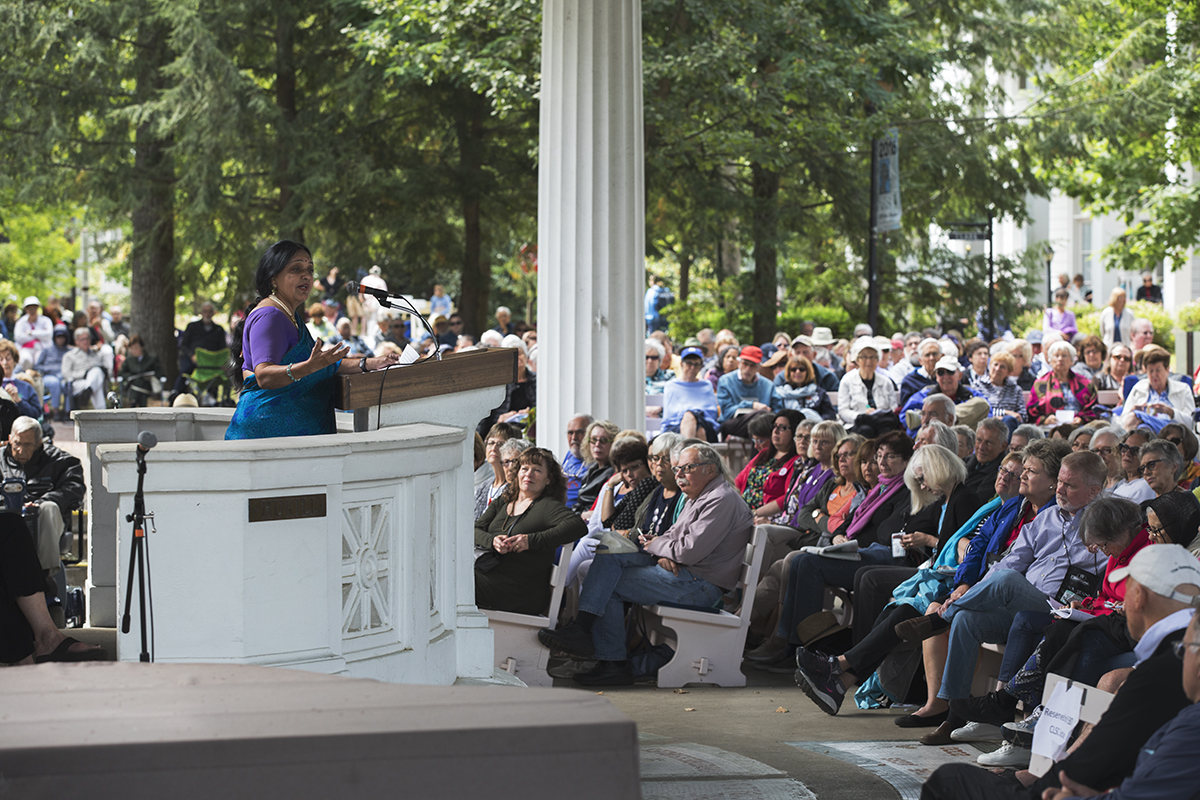 Vasudha Narayanan, distinguished professor of religion at University of Florida, discusses “The Flavors of Faith: Fasting and Feasting in the Hindu Traditions” Thursday, Aug. 24, 2017 in the Hall of Philosophy. PAULA OSPINA / STAFF PHOTOGRAPHER

The name “Vasudha” translates to “goddess of the Earth” — so you can call Vasudha Narayanan, distinguished professor of religion at the University of Florida, “goddess” for short.

Narayanan’s Thursday lecture, titled “The Flavors of Faith: Fasting and Feasting in the Hindu Traditions,” was the fourth installment of Week Nine’s Interfaith Lecture Series, “Food and Faith.”

Narayanan said she was addressing the Hall of Philosophy on a “fitting” day — the 70th anniversary of Mina Miller Edison’s death. Edison was president of what was then called the Bird and Tree Club and also happened to be Thomas Edison’s second wife. In 1879, she presented the first series of traditional cooking classes at Chautauqua Institution.

“I stand here today with people like Mina Edison and on the shoulders of men and women like Mina Edison,” Narayanan said. “She is the light brighter than an electric bulb.”

Present-day America is a little different than Edison’s America, though. Narayanan said in the United States alone, there are 40,000 Chinese restaurants, 9,000 Japanese restaurants and upward of 7,000 Thai restaurants. America’s fascination with Asian food shows that “we are not in Kansas anymore,” Narayanan said.

However, there are less than 5,000 Indian restaurants in the nation. Narayanan’s goal was to educate audience members about the unique cuisine and traditions surrounding it.

In her first week as a graduate student at Harvard, Narayanan borrowed some introductory textbooks on Hinduism from a fellow student. When she was finished with them and he asked her for her opinion, she answered that the books didn’t talk enough about, if at all, food’s connection to the religion. For example, her grandmother always prepared the proper kinds of lentils — particular dishes for festivals and others for funerals. Narayan knew that food played a larger role in her faith than the textbooks let on.

“But over the last few decades, scholars have happily recognized the location at the heart of Hinduism — it’s in the stomach,” Narayanan said.

In essence, she said, all life is based around food. A Hindu text from sixth century B.C. says, “From food, surely we are born.”

“Perceptions of and dealing with ritual food in the Hindu traditions can only be understood in the larger context of the ideas of food in everyday life, body, health, purity — that is, ritual purity — auspiciousness, and our relationships with gods, … ancestors and fellow human beings,” Narayanan said.

So to break it down for the audience, she made sure to address four particular themes: rules and regulations concerned with food; the rules of ritual purity, connected with perceived propensities of food; the centrality of sanctified food; and “food and the act of eating as a quintessential metaphor.”

“I call (the fourth) section ‘delicious deity, delectable devotee’ because it’s a mutual consuming of each other in the passion that the human being and God have for each other,” Narayanan said.

Launching into the first section, she said there is no one thing all Hindus believe, but one common element is the sacred nature of preparing a meal. She referred to a king’s meal in the 11th century, which typically included “fruit that could be chewed, fruits to be sucked and food to be slurped.” This royal meal was always appropriately extravagant.

“In Hinduism, food is ceremoniously offered to ancestors, deities, birds and beasts, guests and other human beings — sometimes all of the above,” Narayanan said.

While excess is at one end of the spectrum, the other end emphasizes restriction. The ritualistic nature of Hinduism regulated the following: how many times a day to eat, what was considered recommended and forbidden food, who the cook and giver of food was, and how to identify ritual defilement.

“Food in ritual context is more than knowing what is forbidden than allowed, and the text of dharma — that is, righteous behavior — in many homes and in rituals surrounding food,” Narayanan said.

That being said, dietary restrictions are still prevalent in many Hindu families.

“One would be hard-pressed to find Hindus not bound by at least some rules, at least on the ritual occasions,” Narayanan said. “People may eat meat all their lives, but say, ‘oh, on Thursdays and Saturdays, or Tuesdays and Mondays, whatever, I don’t eat meat.’ ”

Hindus abstain from a variety of food items, and oftentimes, this abstinence has a particular purpose; for example, someone might fast for eight Mondays with the prayer that their daughter would get into the best school.

I call (the fourth) section ‘delicious deity, delectable devotee’ because it’s a mutual consuming of each other in the passion that the human being and God have for each other,” Narayanan said.

To address her second point, Narayanan said that as early as sixth century B.C., eating “pure food” has had a direct connection to salvation and liberation.

“Pure food is said to lead to a pure mind, which in turn leads to a steady remembrance of the supreme being,” she said. “And when this is the cure, all of the knots that bind us to world are loosened.”

On the flip side, some Hindus believe that consumption of “tainted” food can cause problems. The sins of the cook have the potential to be transmitted through the food and given to the person digging in.

However, Narayanan said, food has the propensity to purify, bringing people qualities such as energy and passion.

There’s a balanced approach to take here, she said. For example, it is often assumed that Hindus are vegetarian because they abstain from eating beef. It is wrong to believe that “every god who got a visa to come to America is a vegetarian.”

One Hindu tradition, however, is the rule of not speaking at dinner. Once, when a Greek friend invited her over for dinner, they asked Narayanan what people typically talk about at her table.

“Well, actually, we’re not supposed to talk then,” she responded. “We’re supposed to pay full attention to the nature of the food, the people who prepared it, the flavors and how it got there.”

In her third point, the theological roots of food, Narayanan introduced the idea of prasanna, which means “clarity” in Sanskrit. Offering food to God is said to bring this clarity to people, since the food is often seen as sanctified. The offering acts as a “union between the devotee and God,” Narayanan said.

This idea brought her to her final point — the connection between God and human.

“Food and the act of eating are seen as root metaphors for what we call the ultimate goal of the human beings, an ecstatic union with (the) supreme deity called Vishnu,” she said. “The union between the Lord — that’s Vishnu — and the universe, and the Lord and the devotee are both spoken of as being ‘eaten by God.’ ”

This notion of Vishnu swallowing the Earth, Narayanan said, has similar connotations to Song of Songs in the Bible. She referred to eating, in this case, as a “cosmic union.”

Narayanan established a few things the Hall of Philosophy crowd could take away from her talk. First and foremost, she wanted people to understand the concept of moderation and balance in the Hindu traditions.

“I keep telling myself, the day I apply this rule to chocolate will be the day I earn salvation,” she joked.

And alongside our personal connection with food, Narayanan said, interdependence through nourishment occurs as well.

“We are all connected to each other biologically, to the Earth chemically and to the rest of the universe atomically,” she said. “And, I would add, to each other, we are connected by food.”

Acknowledging food as a commonality between all, understanding food’s roots and recognizing the importance of food can draw us closer, rather than farther apart.

“We can build walls in cultural cuisine no higher than the local Taco Bell,” she said. “So to know each other better, what tastier way can we find than to find out about each others’ foods and to share food?”

Giving of our food for the benefit of others, Narayanan said, is something we can all agree on.

To close, she presented one final question: “Is it too Pollyanna-like to suggest that we eat our way to peace?”