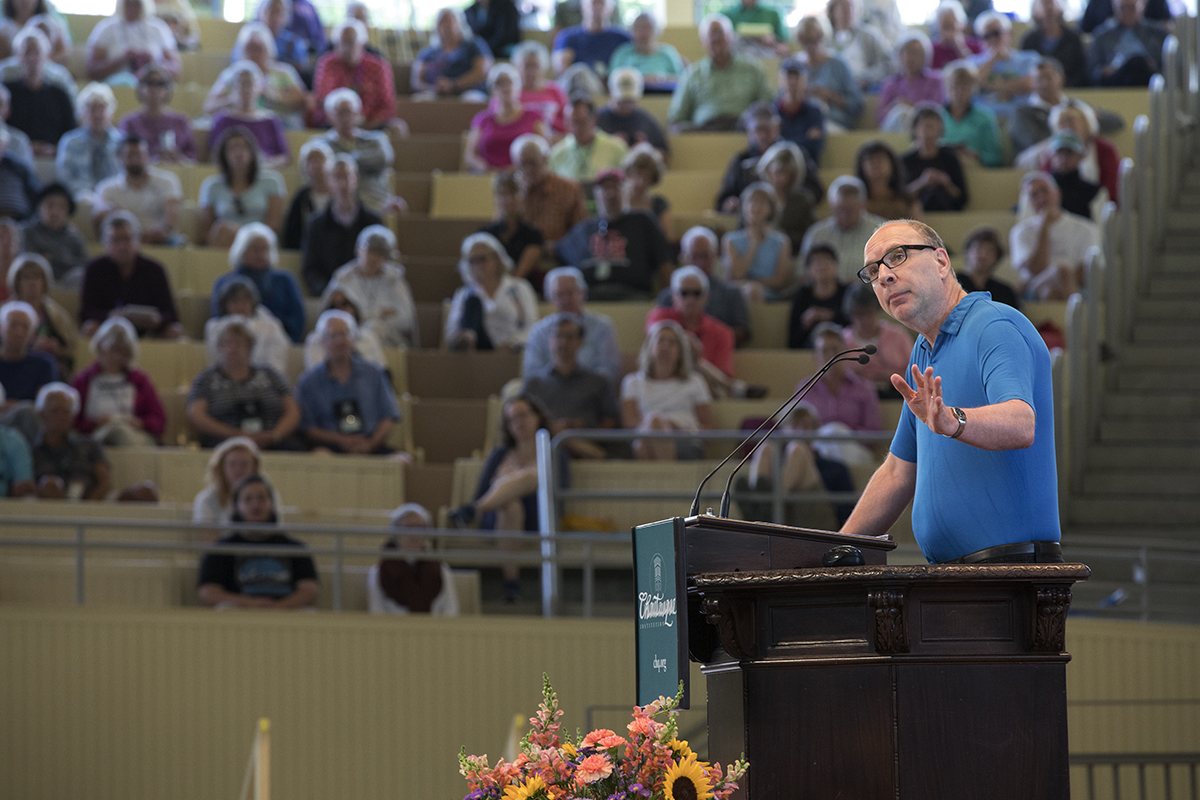 Jay Rosen, associate professor of journalism at the Arthur L. Carter Journalism Institute at New York University, delivers his lecture “Why is the President Trying to Discredit the American Press?” Monday in the Amphitheater. PAULA OSPINA / STAFF PHOTOGRAPHER

When someone visits the doctor these days, they don’t just take the diagnosis at face value — they go online and get a second opinion.

The doctor has not lost authority, but the terms of that authority have certainly shifted.

This in and of itself need not be a problem.

But now imagine if the president of the United States engaged in an active and deliberate campaign, day after day, to undermine doctors. Medical professionals, he claimed, don’t know what they’re talking about, and in some cases intentionally make their patients sicker.

This would be a crisis. And yet, not for doctors but for a different professional class, it’s no hypothetical.

“That is what’s happening to the American press,” Jay Rosen said. “There is an organized campaign to discredit the mainstream press in this country going on right now. And it is working.”

Rosen is an associate professor of journalism at the Arthur L. Carter Journalism Institute at New York University and writes about journalism at PressThink.org. Speaking Monday morning in the Amphitheater as part of Week Eight: “Media and the News: Ethics in the Digital Age,” he explored this trend in a lecture titled “Why is the President Trying to Discredit the American Press?”

“When journalists get to their desks in the morning, between 20 and 30 percent of the public, the electorate, is already lost to them before they even log on,” Rosen said. “Meaning they don’t trust them, they don’t listen to them, they’re not there in the audience or they are actively hostile.”

Part of this, Rosen noted, is due to opacity about “where (journalists are) coming from.”

In that spirit, he clarified exactly what his personal biases are.

“I’m not a journalist, but a critic of the press and a scholar of media,” Rosen said.

Politically, he’s liberal — an “Upper West Side Jewish intellectual-type,” for that matter — and no fan of President Donald Trump.

His relationship with the press can also be fractious, but it comes from a place of support.

So, he is concerned — not only because there exists an “organized campaign to discredit (the) free press,” but because it seems to be working.

And for Republicans, the trend is accelerating; in a single year, from 2015 to 2016, their trust dropped to only 14 percent.

“That doesn’t happen in polling very often,” Rosen said. “Things like that, long-term trends like that, don’t plunge within one year.”

But with Trump leading a deliberate, structured effort to undermine journalists, it is.

“At the top is President Trump, routinely labeling the press ‘enemies of the people,’ calling news he doesn’t like not just ‘biased’ or ‘incomplete’ but ‘fake’ … (claiming) that it makes up its sources or they have no sources; promoting not a healthy skepticism but rejection and dismissal of what journalists do,” Rosen said. “It’s extreme. We’ve never seen anything like it.”

Even President Richard Nixon, renowned for his hatred of the press, did not air his criticisms in public.

“Then, at the bottom of the pyramid,” Rosen continued, “there’s an army of online trolls and activists who shout down stories they object (to), dismiss the institutions of the press as corrupt (and) harass journalists individually.”

The relationship between the president and his base is mediated by institutions like “talk radio, Rush Limbaugh, Matt Drudge, Breitbart and, of course, Fox News.”

This infrastructure has roots 48 years old, stretching back to a series of speeches Vice President Spiro Agnew delivered in 1969 decrying television punditry as overtly biased.

Not every contributing factor emanates from the Oval Office, though.

“Local newspapers, which once were the breeding ground for trust in journalism … are in decline in many ways,” Rosen said.

Additionally, “there’s a larger economic crisis that has to do with the erosion of advertising, most of which now, in the digital era, has been captured by Facebook and Google.”

And with institutional trust declining elsewhere, too — not just in media, but in politics and government — it’s harder for coverage of those entities to retain credibility.

Journalists themselves aren’t free from blame, either.

“Then there’s the homogeneity and coastal concentration of American journalists in a few large cities, which is another way of saying that the American press is not very diverse,” Rosen said. “It tends to be quite uniform in the cultural backgrounds and assumptions of its practitioners.”

The focus of political journalism on political insiders like strategists, handlers and pollsters, he said, has further created a media environment where partisan spin replaces authentic voices.

The president does play a big part in eroding the press from the top down, though.

“There’s also the increasingly dim prospect that we can have a fact-based debate when the leader of the free world feels free to broadcast false claims and make stuff up,” Rosen said.

Politicians have always lied, but rejecting the notion that truth matters at all is a new issue. And through “verification in reverse” — Rosen’s term for when leaders introduce doubt into previously agreed-upon truths, as with Trump and birtherism — they empower “anti-journalistic” political movements.

And with a former television personality as president, the boundaries of entertainment are seeping into the real world, Rosen added.

Larger trends are at play, too. The rise of web platforms as news distributors and the lack of institutional oversight for journalism at large reduce accountability for important moderators of public dialogue.

Finally, in a broader sense, the division of political belief in America is realigning from a left/right split to an open/closed split.

“Journalism is kind of in the crosshairs because … (it’s) part of that open society,” Rosen said.

Journalists aren’t the only ones, he added. In the Department of State, for instance, foreign service staff vacancies and the shutting out of  Secretary of State Rex Tillerson from the policymaking process speak to the same trends.

“The attacks on journalists are actually part of a larger problem in which academics, civil servants, cosmopolitans, experts, globalists (and) professionals of different kinds are all slowly being brought under this category: ‘enemies of the people,’ ” Rosen said. “Disturbing.”

How can trust be restored amid all these conflicting factors?

“I don’t think there is a solution to this,” Rosen said. “These developments I’m talking about today are deep-seated; many of them have been building for almost 50 years. They’re cultural in addition to being political. They’re becoming part of the fabric of American society.”

“So it’s not going to be easy to change this,” he added.

But there are certain strategies that journalists should consider adopting if they hope to restore the credibility of the press.

For instance, as Rosen demonstrated when he aired his own political leanings at the start of the lecture, he thinks “journalists should start telling us, routinely, where they’re coming from.”

Media organizations should also start making their editorial priorities clear to readers, Rosen said, as well as how much money they spend on unearthing major stories.

The way the press interacts with outsiders is also key.

“When somebody in power says, ‘You are fake news’ or ‘You got this completely wrong’ or ‘You made that up’ or ‘You don’t have any sources,’ I think (journalists) should respond forcefully and argue back,” Rosen said.

And beyond just responding to criticism, journalists should also ask skeptics to check for themselves by providing access to the data, studies, transcripts and other evidence from which conclusions are drawn.

Reaching out to readers (or viewers) for help developing stories, like ProPublica did when investigating patient harm in hospitals, is also a practical mechanism for building not just coverage, but trust.

“Now, are any of these things going to work to solve the problem?” Rosen asked. “No. They might help, but the problems are too deep-rooted. Maybe they will have an effect in the long-term, but for the short-term, I think the campaign to discredit the mainstream press … will go on.”

But it is a fight worth having, he said, because at stake is “the whole idea of a common world of fact.”

As the late Sen. Daniel Patrick Moynihan (D-NY) once said, “Everyone is entitled to his own opinion, but not his own facts.”

A significant number of people now, though, do seem to feel entitled to their own facts, too.

“And one of them is (the) president of the United States,” Rosen said. “That’s a problem.”