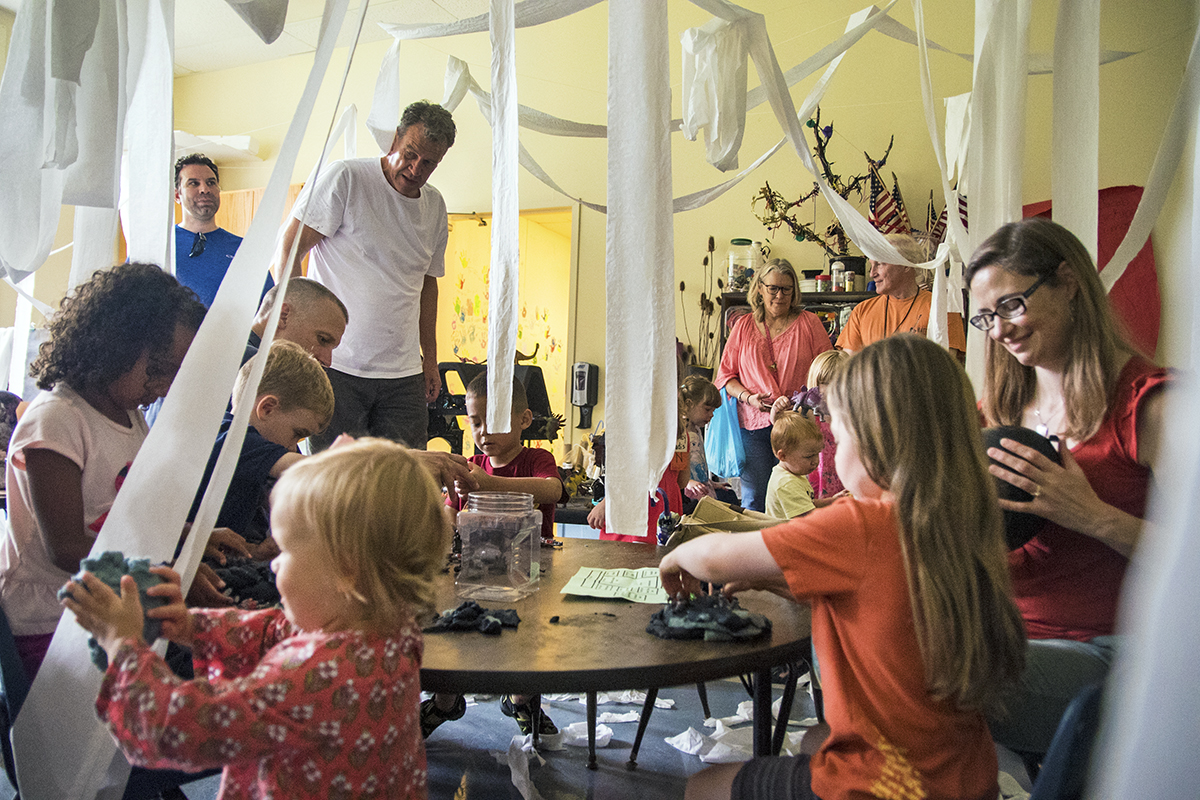 As parents and family members filtered through the doorway, they clutched uninflated black balloons.

Exiting the rear of the building and crossing the small wooden bridge into the backyard playground, their kids — the 3- through 6-year-olds of Children’s School — sat anxiously on a small hill in the shade of a few trees.

Last Friday, Children’s School opened its doors to family and friends for a “haunted” Open House, a chance for parents and loved ones to tour the school and see what their sons and daughters had done during the week. It was also a chance for all involved to have a little Halloween fun during the summer.

After the chatter on the playground faded, music teacher Jenna Giammalvo spoke to the family members, asking if each had their balloon.

“If you haven’t already done so,” Giammalvo said, “please blow your balloon up. You’re going to use them to help us.”

In the Children’s School way, the kids welcomed their guests with song. Their first number was “Bats!” — a tune with a very distinct chorus.

“If you stretch the opening of the balloon, you’ll make a sound pretty similar to a bat,” Giammalvo said to the audience of parents before a run-through of the song. “So we’ll need your help at certain times.”

Still they give me a chill, squeak, squeak

I know they always will, squeak, squeak

For the audience’s part, “Bats!” went off without a hitch. The kids immediately followed it up with “I’m a Little Spider” and “The Children’s School Song.”

As the playground cleared and parents and children began to explore the haunted house, the 4s of the Orange Room took a moment to share a little bit.

“We went on our own monster hunt today,” Orange Room head teacher Clarissa Savage said to the guests as the kids huddled at her feet. “But what were the monsters really?”

“Bugs!” exclaimed the kids with a laugh.

Parents and kids alike were free to explore each of Children’s School’s rooms.

The Orange Room had “touch it if you dare” stations set up with gooey play-dough, rice, cooked noodles and sand to play with.

The Purple Room had caterpillars on display, some even enclosed in chrysalises, soon to emerge as monarch butterflies.

The 3s in the Red Room were making bat masks, complete with glitter and paint.

The 5s in the Yellow Room turned their room into a ghostly haunted house with streamers of toilet paper draping from the ceiling. The also made their own miniature haunted house using a doll house, small plastic and rubber dinosaurs, and a good amount of black paint.

The Blue Room was a light exploration station, where an overhead project shone light on a wall and created shadows of whatever was placed on the projector. Plastic toy skeletons, beads and other trinkets made eerie shadow shapes in the darkened room.

In Group 1’s Sheldon Hall, soapy pictures were the attraction, as most of the color did end up on the paper it was supposed to end up on.

Hanging on a few of the outer walls of the Children’s School building were life-sized tracings of ghosts, goblins and monsters that the kids had made by having their own bodies traced and adding their own finishing touches to make the ghoul they wanted to.

“She’s walking in the forest and she’s picking blackberryas (sic),” Ariana wrote on her picture. “They are poison to us, but not for her family.”