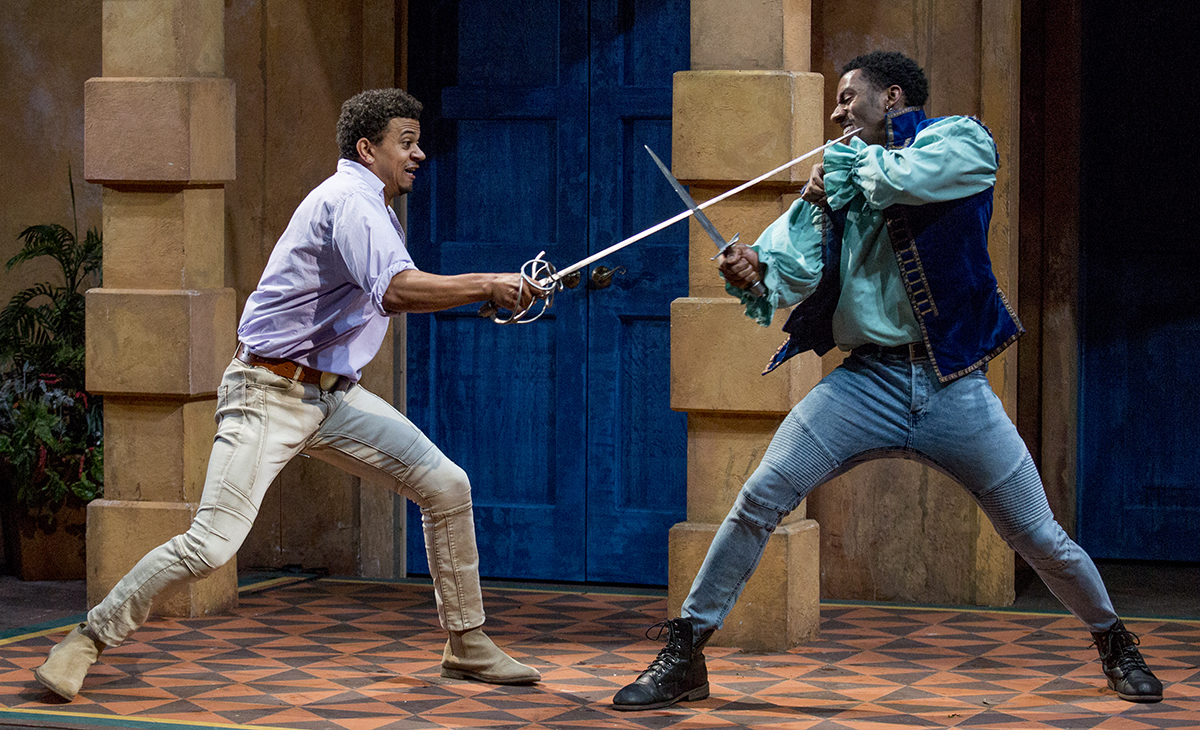 For a show that’s ostensibly about love, there wouldn’t be much of a plot to Romeo & Juliet without all that violence.

Schall, a New York-based fight director, choreographed the pivotal scenes in Chautauqua Theater Company’s production of Romeo & Juliet, which continues its run at 2:15 p.m. and 8 p.m. Wednesday in Bratton Theater.

Having started in the theater as an actor, Schall came to fight directing after landing a number of roles in classical plays that called for stage violence. He studied stage combat in school and found he had a propensity for it, so he went on to train with the Society of American Fight Directors.

Concerned he would be pigeon-holed as “a fight guy,” Schall moved away from stage combat when he moved to New York. But over time, the jobs kept coming. He started fight directing in the late 1980s and by the mid-’90s it had become “probably 90 percent” of his work.

Drawing on the skills of an actor and director, Schall said he approaches fight direction as telling a story through physical action, but in a way that is both compelling and safe.

His theatrical credits include serving as fight director on more than 30 Broadway productions, and he recently received recognition during the 62nd Annual Drama Desk Awards for his contributions to the off-Broadway productions of Othello and The Hairy Ape. His next project is Puccini’s Tosca at the Metropolitan Opera.

Schall’s resume also includes fight directing the 2013 Broadway production of Romeo and Juliet, which was directed by David Leveaux and starred Orlando Bloom and Condola Rashād. Schall said he sees CTC’s Romeo & Juliet, which comes with a different vision and set of actors, as its own creature and didn’t think back on that previous production much.

“I don’t know if people go, ‘I’m going to see Romeo & Juliet tonight, I can’t wait to see the fights.’ I think it’s a bigger story than that,” Schall said. “But I think definitely the fights are such an integral part of the emotional arc of the play.”

Earlier this summer, Schall visited Chautauqua for a total of eight days to set the fights and direct the conservatory actors. He previously visited CTC in 2010 for Macbeth, and CTC Artistic Director Andrew Borba suggested that Schall return. That production of the Scottish play had a “contemporary military feel” with pistols and combat knives, Schall said.

Romeo & Juliet has a similarly modern touch, but instead opens with actors in contemporary costumes engaging in a modern-day knife fight. By the time charismatic rivals Tybalt and Mercutio are circling each other onstage, the daggers and rapiers are out.

Dawn Monique Williams, who is visiting from Oregon Shakespeare Festival to direct Romeo & Juliet, talked on the phone with Schall about a mixed-period production several months ago. Williams said she wasn’t thinking of West Side Story, which reimagines Shakespeare’s story against the backdrop of gang warfare, when considering the fights.

“I knew I wanted a brawl that felt kind of like scrappy and more contemporary, and so switchblades are kind of the obvious concession when you don’t want to change too much language — because they talk about blades,” Williams said.

The creative team “learned very quickly that the space is very small for sword fights,” Williams said. The 269-seat theater is rather intimate, and because there would be limited time to rehearse on set, Schall said he thought it would be safer to keep the violence downstage.

“You’re talking about a human being holding an almost 3-foot-long sword,” Schall said of the rapier and dagger choreography. “You get two people onstage, and you’ve pretty much filled quite a bit of space.”

Another complicating factor was that the rehearsal space had low ceilings, so there were a few instances of actors stabbing the ceiling as they were learning the choreography.

Lavour Addison, the CTC conservatory actor in the role of Mercutio, served as fight captain for the production. For about 45 minutes each morning in the days leading up to the opening, Addison and the actors ran through the fights three or four times at varying speeds.

It should look dangerous, but it shouldn’t feel dangerous, Addison said, comparing the movements to a dance.

“It should flow,” Addison said. “We have a lot of big, round sweeping movements, and when you’re going so hard and so fast, it makes it sort of jagged and it makes it clunky.”

A wrestling enthusiast, amateur boxer and actor, Addison said he would love to have a career that allows him to act and do stage combat. He has portrayed Macbeth and hopes to one day tackle Coriolanus, Shakespeare’s tragedy of the legendary Roman leader.

Schall said the creative team was “blessed” with Addison’s physicality, and his athleticism made its way into the character and choreography.

“Some of his actions are a little, shall we say, improvisatory and not what one would expect coming from somebody who is swordfighting,” Schall said.

Ultimately, this is what helps CTC’s Mercutio go up against rival Tybalt, who is lithely described as “king of cats,” Schall said.

Those agile moves are a long way from Schall’s first encounter with Shakespeare’s star-crossed lovers. He played Romeo in his high school’s production. Looking back, Schall can’t remember what the fights were like, or if they were any good.

“But it certainly felt full of passion,” he said.