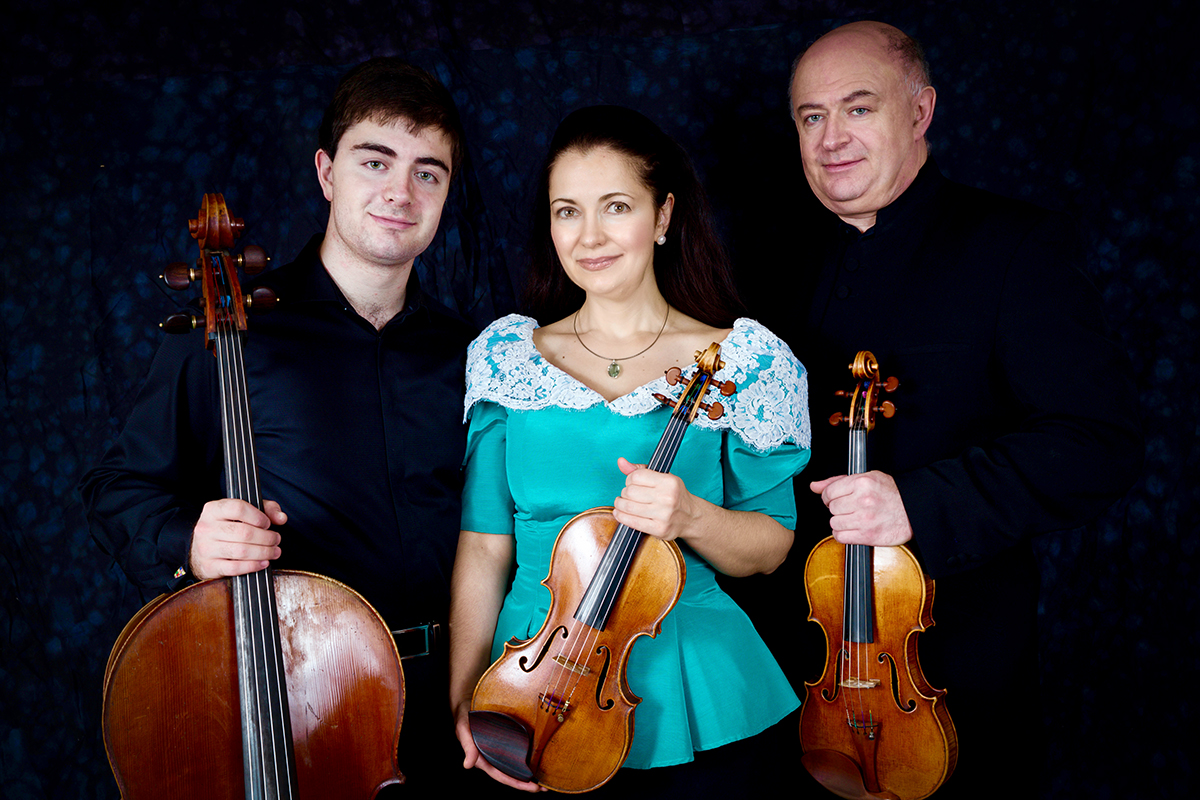 Music gets compared to a lot of things: language, architecture, mathematics, drugs.

Violinists Olga and Ilya Kaler like to think of a concert program as a well-proportioned meal.

The Kaler Family Trio — Olga and Ilya, along with their cellist son, Daniel — will be joined by pianist Beilin Han for a varied yet balanced program at 4 p.m. Monday in Elizabeth S. Lenna Hall as part of the Logan Chamber Music Series.

Like any multicourse meal, a good concert program must have a certain degree of variety and quality. As a general rule, the Kalers try to select repertoire that collectively spans at least 300 years of musical history.

“We always think about that when we’re constructing a program so the best every style has to offer is always present,” Olga said.

There’s another factor that plays into the Kalers’ choice of repertoire — namely, the lack of it.

“There is no repertoire for two violins and cello,” Olga Kaler said. “It doesn’t exist.”

Actually, Olga Kaler added, there is one piece.

“It’s a very bad piece,” she said, referring to a string trio by Alexander Borodin.

Even if Olga and Ilya were to perform just violin duets without Daniel, the selection would only be slightly better.

“There are a lot of pieces, but they don’t carry much aesthetic or artistic value,” Ilya Kaler said. “Historically, most of the pieces written for two violins were written for amateur musicians.”

One of the big exceptions is a piece by Sergei Prokofiev. According to Ilya, even Prokofiev was less than impressed with the existing repertoire for two violins.

“He heard some very mediocre piece performed in one of the chamber societies (in Paris),” Ilya said. “He was mad at having wasted an evening, so he decided he would prove you can write something worthwhile and interesting for only two instruments.”

The result was Prokofiev’s Sonata for Two Violins, which Olga and Ilya will perform. Ilya said Prokofiev was, remarkably, able to write a piece that bears all the famous hallmarks of the composer’s style.

“It’s truly amazing what he managed to do with just two violins,” Ilya said.

In the Kalers’ culinary metaphor, the Prokofiev would certainly be the main dish.

For an appetizer, the audience will have a taste of Baroque counterpoint with a set of variations on a theme of Georg Friedrich Händel by Norwegian composer Johan Halvorsen. The Passacaglia for Violin and Viola is based on the passacaglia — essentially a repeated bassline with increasingly intricate variations composed on top — from Händel’s Suite No. 7 in G minor, HWV 432.

“The passacaglia could be called a substantial appetizer,” Ilya said.

“It’s more like a dessert at the end of the first half,” Olga said.

The three Kalers have only performed one other joint recital at Chautauqua. Olga is already well-known to Chautauquans as a frequent chamber performer and member of the Chautauqua Symphony Orchestra. Ilya regularly coaches music school students and teaches master classes. Both Ilya and Olga were recently appointed to the string faculty of the Cleveland Institute of Music where Daniel, 19, has already completed two years of study with Cleveland Orchestra Principal Cellist Mark Kosower.

The second half of the program serves as a digestif or postprandial espresso, starting with Moritz Moszkowski’s virtuosic Suite for Two Violins and Piano in G major, op. 71.

“It’s very easy on everyone’s stomachs, hearts, minds and ears,” Ilya said. “It has four short movements, but it’s written with finesse and craftsmanship. It’s always a pleasure to play it.”

The concert will end with Pablo de Sarasate’s “Navarra,” op. 33 for two violins and piano, a tour de force and fitting end to a well-rounded program.

“It’s a little bit of fireworks for our audience,” Ilya said.