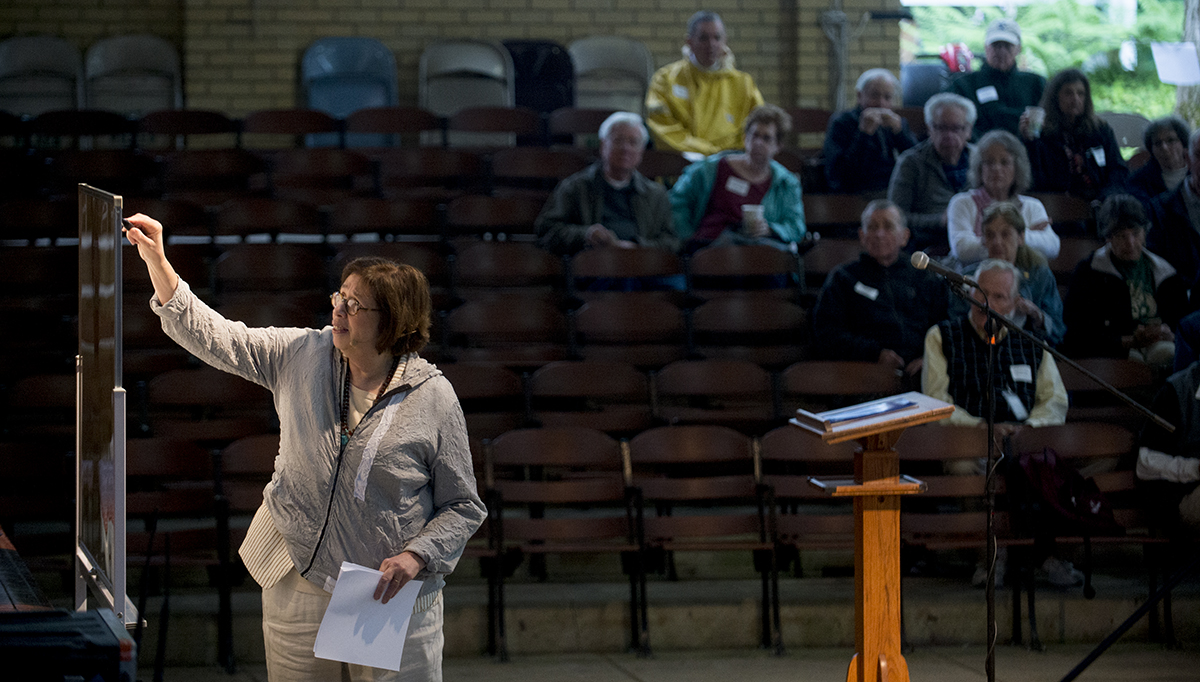 Linda Greenhouse, the Joseph Goldstein Lecturer in Law and Knight Distinguished Journalist in Residence at Yale Law School, gives a talk on the Supreme Court July 25 in Smith Wilkes Hall as part of the Scholar in Residence program.

A generous gift from the Edward L. Anderson Jr. Foundation sponsored this year’s Scholar in Residence program, which was led by Linda Greenhouse.

Each morning from July 25 through July 27, members of the Bestor Society and the Eleanor B. Daugherty Society gathered in Smith Wilkes Hall to hear Greenhouse delve further into Week Five’s theme — “The Supreme Court: At a Tipping Point?”

From 1978 to 2008, Greenhouse was the Supreme Court correspondent for The New York Times and currently writes a biweekly op-ed column for the Times as a contributing writer. She is also the Joseph Goldstein Lecturer in Law and Knight Distinguished Journalist in Residence at Yale Law School.

The overarching theme for the program was “The Supreme Court: Behind the News,” and each day Greenhouse focused on a different aspect of this theme. On July 25 she discussed “The Court’s Agenda — And Ours,” and looked at how the justices select cases each year, what this process involves and how these cases tie into broader social agendas.

“When the (Supreme) Court exercises its statutory right to choose its own agenda, (it) really sets our own legal agenda,” Greenhouse said.

On July 26, Greenhouse proceeded to look at “Voices at the Court” and how the justices acquire the information that they need. Finally, she ended the program July 27 by examining “The Confirmation Process” and whether it is irrevocably broken.

The Scholar in Residence program is offered exclusively to members of the Bestor Society and the Daugherty Society, which recognize donors who make an annual gift of $3,500 or more to the Chautauqua Fund and those who have designated a planned gift to Chautauqua, respectively.

Greenhouse is the seventh scholar the Edward L. Anderson Jr. Foundation has sponsored. This foundation was set up in the 1970s by Edward Anderson, who passed away in 2012. It is now run by his two sons Steven and David.

“(Dad) liked to be broadly based and broadly educated,” Steven Anderson said. “He was a quintessential lifelong learner.”

Edward Anderson was the first of his family to go to college. He attended the University of Chicago at the age of 16, where he took a broad range of electives, before attending Washington State University.

Both scientists by training, Steven Anderson said he and his father — who received a Ph.D. in chemistry from WSU — shared a special love for learning. He fondly remembers going bird watching together and believes it was these moments he spent with his father that birthed his love of nature and led him to get a doctoral degree in ecology.

“He (was) a very analytical guy (and an) incredible intellect — what I would call a cultural sponge,” Anderson said. “(His) No. 1 passion would be ballet, (followed by) opera.”

The Andersons have been coming to Chautauqua since the early ’70s, and both and David both bring their whole families with them to this day.

According to Anderson, if his dad wasn’t at a lecture or event, he could be found reading on the porch of the Keystone.

“He always wanted to learn something … or go somewhere new,” Steven Anderson said. “He was the perfect example of a lifelong learner.”