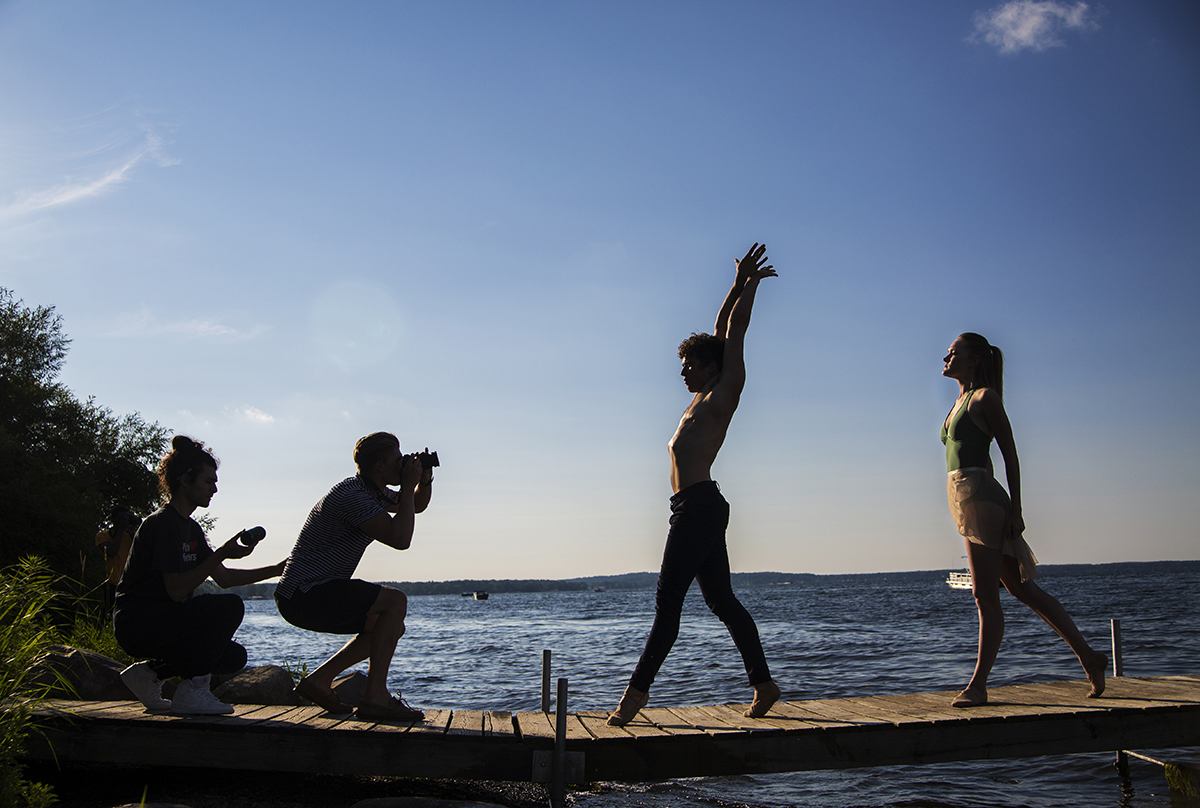 Stelth Ng is a musician who has a thing for dance. Last year, the violinist worked with dancers from the Charlotte Ballet to combine music, choreography and videography for a project called “The Lark.” It was dedicated to the late Jacques Israelievitch, an acclaimed violinist who served on the faculty at the School of Music.

“I realized that in creating such choreographic film productions, there is potential to bring this partnership of choreography, ballet and musicians to those who may not attend shows where there is live music and dancing,” Ng said.

Ng’s latest project, which included dancers from the Charlotte Ballet and music from a string quartet, was filmed on a dock on the shores of Chautauqua Lake during Week Three.

For the past three summers, Ng has played for the School of Dance’s Choreographic Workshops, an experience that he said has taught him that “nurturing and exploring such relationships is so vital for one’s artistic growth.”

“I had an amazing time working with Stelth on this project,” said Lapointe, who was the lead choreographer and dancer for the piece. “His excitement and energy was always encouraging and his ideas brought the true ‘artist’ out of each individual.”

Ng said he asked Lapointe to “prepare a more contemporary approach” when it came to the choreography to fit the “more contemporary feel” of the work of composer Laura Sgroi, requesting that it be performed in soft shoes rather than en pointe, like last year’s production.

“We worked together to support each other and to enhance the fluidity of the score provided by the outstanding musicians,” Lapointe said.

The work is set to a movement of string quartet music by Sgroi, a Toronto composer, and Ng said each dancer is meant to “represent their own individual instrument in the string quartet.” Ng called Sgroi’s piece, “Transcendence: Hold On,” a movement that is “absolutely beautiful and haunting.” He recorded it in May with a string quartet in Toronto.

“While anyone who’s listening to the string quartet will hear a duet between the cello and violin,” Ng said, “I want the dance side of it to see the pas de deux happen between the respective female and male dancers.”

The performance was filmed by Toronto-based cinematographer, Luke Saagi.

Ng is a particular type of visionary. Two weeks before the start of the season, he was diagnosed with a new ocular condition in his right eye, in which he’s completely blind.

“While this has obviously been distressful and reminds me that my last good eye may have an expiration date,” Ng said, “it has only fueled my motivation to complete more productions like this that visualize music while I can still see.”

Ng handles the direction, production and editing of his pieces while working with a sound mixer to ensure that his artistic vision is properly executed.

“The way the shots are filmed and cut need to be respectful to the pulse of the musical score, as well as the dancing and choreography,” Ng said. “It’s a lot, but it doesn’t bother me much. My one good eye loses focus frequently and tires very quickly when I’m working on heavily visual stuff.”

Though Lapointe said it “took a few hours to get each shot,” the meticulous process was “well worth the time and effort.”

“Together we reached limits that (we) didn’t know existed and created an outstanding production that we’re all excited to share with everyone,” Lapointe said.

Ng said that the video, which is currently in post-production, will likely be finished by October. He plans to release it on Facebook and on his YouTube and Vimeo channels.

“My hope is that I can use cinematography to help propel the work of all the dancers, musicians and composers,” Ng said.