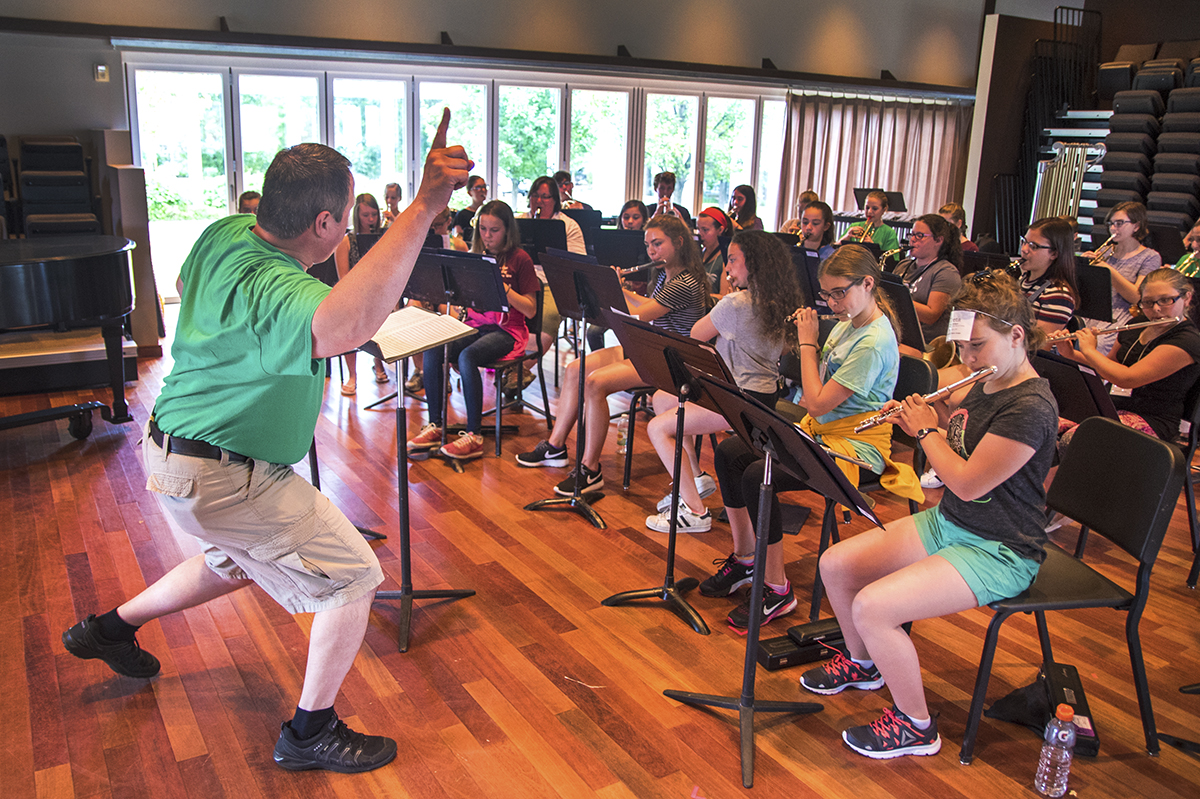 Over the course of five days, the instructors at the Chautauqua Music Camps transform a group of 117 middle and high school students from around the country into stage-ready orchestras, bands and jazz ensembles.

“One of the things that we’ve tried to do over these years is give these kids an intensive experience they’re not getting in their regular music program,” said Terrence Bacon, Chautauqua Music Camps’ middle school band camp director. “The growth that they exhibit from Monday until the concerts is just amazing. It is wonderful to see the musicianship of the kids grow.”

The Music Camps program, currently in its 19th year, began by practicing in Turner Community Center. But Peter Lindblom, Music Camps director and Chautauqua Symphony Orchestra assistant principal trumpet player, said that since Chautauqua Institution’s music facilities were built, the Institution has allowed them to run the program out of those buildings after the seven-week School of Music season ends.

The Chautauqua environment adds an extra layer to the students’ experience during the weeklong day camp. Lindblom said that most students in public schools aren’t exposed to facilities like the ones they’ve been rehearsing in this week. The camp also allows gives them access to the rest of what the Institution has to offer — like seeing the CSO perform in the Amphitheater.

Bacon said the CSO even lets the students “disrupt a rehearsal” every summer. He said the instructors bring the students “like a herd of cats” from the McKnight lawn to the rehearsal. For many students, Bacon said, it’s their first time hearing a symphony orchestra.

The Music Camps instructors’ goal is to inspire the students and keep them interested in playing music.

“We’re not driven by any mandates from the state, we’re driven by what we think is best for the students’ education,” Lindblom said, “which is what Chautauqua is about. That’s the Chautauqua model. We follow that without trying.”

Especially when working with middle school students, Bacon said it’s important to choose unique and exciting pieces. He said he chooses pieces that are high quality and challenging, but  also ones the students will remember and enjoy. In Saturday’s performance, Bacon’s band students will perform a piece about giant dust bunnies attacking.

It’s not just the pieces Bacon tries to make memorable, but also the rehearsal process. For Saturday’s dust bunny piece, the students chose a band coach for a featured screaming part after the coaches held a screaming contest. The students also chose which band coach had the best “ew” to accompany them for part of their performance.

“Those crazy little things are the things they remember, the things that help keep them energized and wanting to perform,” Bacon said. “Music is hard, music is really hard work, but music is also fun. We can mess with the audience, we can give them an emotional experience they will take away.”

The entertaining but rigorous program has a high retention rate. Lindblom said the Music Camps become a lifestyle – “once you start you stay.”

Maisy Chang, a 14-year-old trumpet player who goes to Jamestown High School, is returning for her fourth summer at the camp. She said that compared to her training at school, the Music Camps are “more intense, but in a good way.”

“You’re supposed to practice and play every day; especially for brass instruments, it helps make your lips stronger,” Chang said. “So this is good training, especially playing such long hours every day. It’s like weight training for our lips.”

The students practice for eight or more hours each day during the five-day program. Lindblom said it’s a testament to what kids are capable of doing when they’re immersed in training and taught correctly.

“I like when you don’t understand something and then your teacher explains it to you and you get the whole picture of the music and you can play it,” said Kushmaul, whose father, Brian Kushmaul, is a percussionist in the CSO and mother, Deborah Sunya Moore, is vice president and director of programming at Chautauqua Institution. “And I love the sound that comes out when you know what you’re supposed to be doing, and you’re not just playing notes.”

The intense practice that goes into preparing for a concert is the “cruel reality of doing anything in the arts,” Bacon said.

“The public sees the final product,” Bacon said. “They see the magic at the end. They don’t see the hours and hours that go into making that magic happen.”

And while the Music Camps performers might have fewer hours of practice under their belt than professionals like the members of the CSO, that won’t make this weekend’s performances any less magical.

“I think people are shocked how much can get done in a week,” Lindblom said. “Chautauquans will love it. It’s quality concerts.”