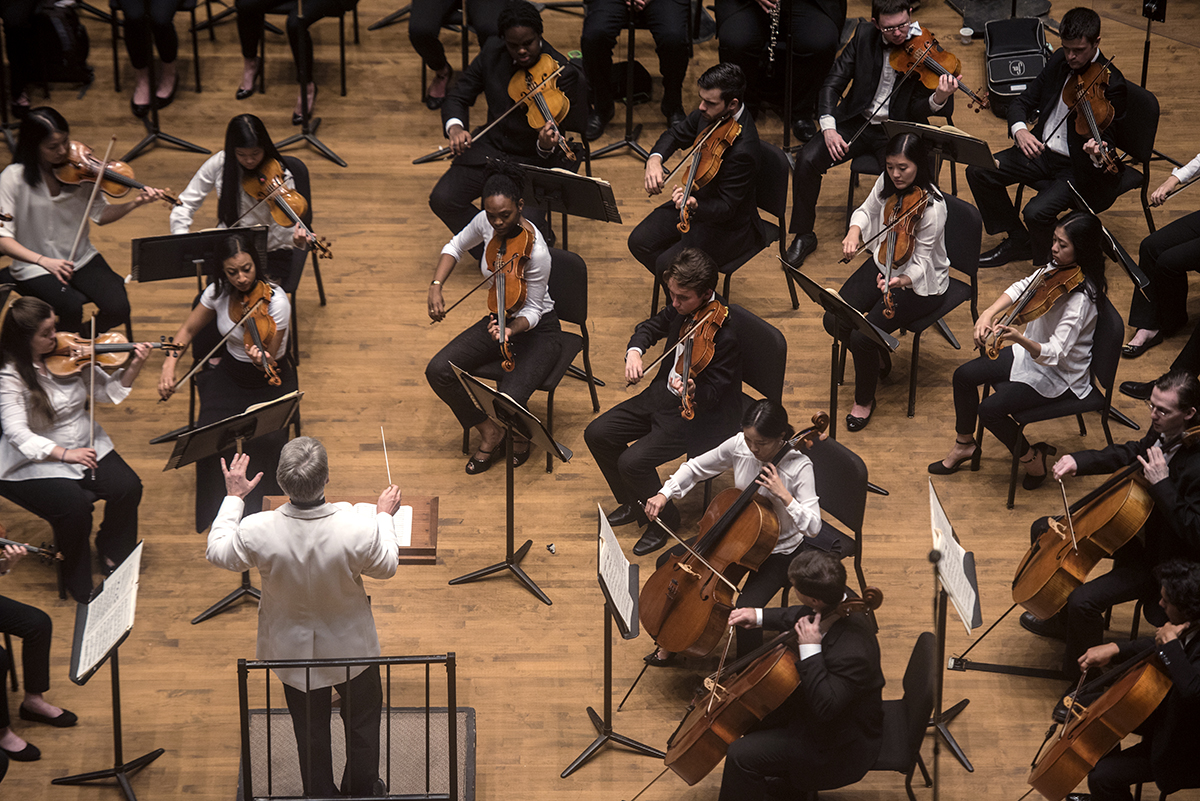 Music Director Timothy Muffitt leads the Music School Festival Orchestra on July 17 in the Amphitheater. The MSFO will perform for the last time this season at 8:15 p.m. Monday in the Amp. OLIVIA SUN / STAFF PHOTOGRAPHER

After seven weeks learning, practicing and performing with one another, the Music School Festival Orchestra will play their final concert.

Muffitt said the MSFO has covered a “broad expanse of style” throughout the summer. At 8:15 p.m. Monday in the Amphitheater, the MSFO will expand that range even further, performing Edward Elgar’s “In the South (Alassio)” and Hector Berlioz’s “Symphonie fantastique.”

The 1830 Berlioz piece is a typical Romantic work. It tells a detailed story about the life of a young artist, and explores the artist’s self destruction through obsessive, unrequited love and drug abuse. In many ways, the piece mirrors Berlioz’s own life. According to PBS “Keeping Score,” while living in Paris in 1828, Berlioz became interested in two artists: Beethoven and Shakespeare. While PBS states Beethoven’s music “established the Romantic ideal,” Shakespeare provided Berlioz with another form of inspiration — the Irish actress Harriet Smithson.

“ ‘Symphonie fantastique’ is nothing less than Berlioz’s extravagant attempt to attract Harriet’s attention,” according to “Keeping Score.”

Ultimately, it took more than the piece to woo Smithson. Berlioz swallowed a lethal dose of opium, prompting Smithson to agree to marriage. Berlioz then conveniently pulled the antidote out of his pocket.

“With ‘Symphonie fantastique,’ Berlioz stepped into his artistic maturity,” according to “Keeping Score.” “The lovesick teenager had become the Artist who had won the heart of his fixation.”

The piece is composed of five movements, and Muffitt said that typical to Romantic art of all kinds — musical, visual and literary — “Symphonie fantastique” contains elements of macabre and the supernatural. Though Muffitt called the piece a “wonderful, musical monument to the era,” he also said the early Romantic piece sounds modern, even by today’s standards.

“Berlioz had an immensely fertile imagination when it came to music and explores a lot of new territory,” Muffitt said.

The details Berlioz includes in this piece pose a specific challenge to the orchestra. Unlike other pieces where the details are connected to a musical style, Muffitt said that in “Symphonie fantastique” the details are “just connected to a dramatic unfolding,” which allows the instrumentalists to take a more personal approach when playing the piece.

Though the epic, orchestral piece is no easy feat, Muffitt is confident the MSFO students, who have “stepped up to the plate in every occasion,” will rise to the challenge.

“It’s a piece that these musicians will play many times in their lives,” Muffitt said. “This is a great place for them to have their first, or an early experience, playing it.”

Before the MSFO delves into “Symphonie fantastique,” they will perform Elgar’s “In the South,” which will be conducted by Rebecca Tong, the 2017 David Effron Conducting Fellow.

Elgar’s piece is also about an artist’s inspiration. But rather than a toxic, drug-induced love story, like the Berlioz piece, Elgar was inspired by the Italian Riviera. During the winter of 1903-1904, Elgar vacationed in the town of Alassio, Italy, with his family. He was inspired by the rich Italian history.

Tong described the piece as a combination of the work of Richard Strauss and Elgar’s better-known piece, “Enigma Variations.” Strauss influenced much of Elgar’s work, and Tong said audiences can hear it especially this piece. Strauss’s influence can be heard particularly well in the brass section, when the horn has a 16-note run.

Tong said this is a great piece to end her summer with the MSFO and her time at Chautauqua. She said the combination of art, music, philosophy and religion has helped her grow not only musically, but also as a person.

In addition to the growth Tong has noticed in herself, she’s seen the MSFO students develop over the course of the summer.

“Orchestra is like a big chamber music group. It needs adjustment, but these talented musicians know how to listen to each other and adjust quickly,” Tong said. “Throughout the seven weeks they’ve grown, and all of them that I’ve talked to want to improve with each concert and that shows they’re serious and care about their music making.”