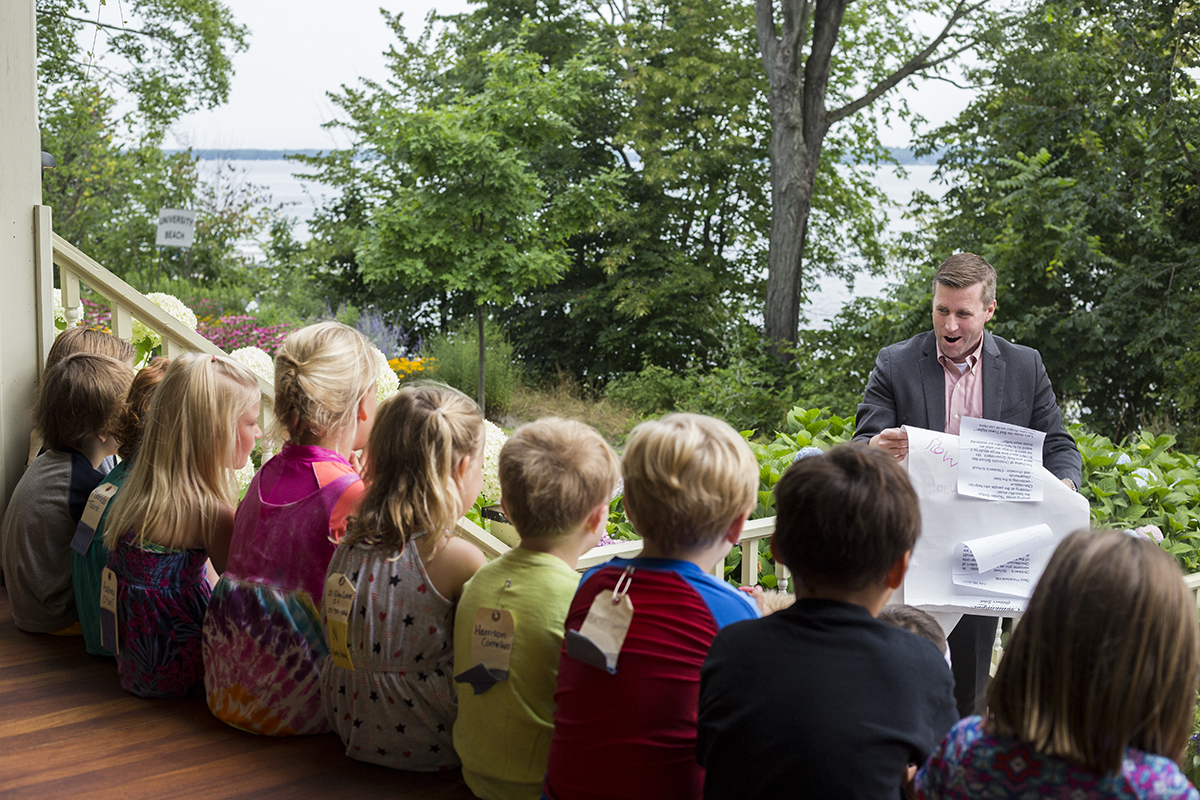 The 5s from the Yellow and Blue rooms at Children’s School present President Michael E. Hill with suggestions on how to improve Chautauqua at the President’s Cottage on Friday July 28, 2017. CAM BUKER / STAFF PHOTOGRAPHER

The future of Chautauqua Institution doesn’t just have a voice — it has some ideas.

Last Friday, those ideas were brought to the steps of President Michael E. Hill’s house as 5s from Children’s School visited Hill’s cottage and presented him with a letter that detailed what they love about Chautauqua, as well as their suggestions for how to make it even better.

“So often, we spend time with adults here,” Hill said, “so I think it’s cool to have the youngest Chautauquans talk a little bit about why this place matters and what they hope to see.”

On July 26, the 5s spent time talking with members of the Chautauqua administration. The kids were able to ask questions, both personal and professional, about what different people do in their roles at Chautauqua.

The kids fired off questions that ranged from the mundane (“What do you do at your job?”) to the vital (“What’s your favorite mythical monster?”).

Following the Q-and-A sessions, each guest received a personal tour of the Children’s School classrooms and surrounding grounds.

From their time with these Chautauqua professionals, the kids not only learned more about Chautauqua but were also able to start formulating their own ideas for Hill. These ideas, Hill said, are critical to Chautauqua’s future.

“If what we’re talking about is curating the best conversations about what’s happening in society, that’s got to include all of society, which includes age diversity,” Hill said.

After being welcomed to his home, the kids presented their letter to Hill. Then, to ensure he read each and every word, they sat on his steps and waited. And read every word he did.

Children’s School is happy to welcome you as our new President of Chautauqua. We, the 5-year-olds of the Blue and Yellow rooms would like to share a little bit about what we think is special about Chautauqua and suggestions for its future.

We love Chautauqua. A few of the things we love about Chautauqua are:

– spending time with our families

– seeing our friends all over the grounds

– all the awesome secret hideouts

– meeting all the people who help run Chautauqua

– swimming in the lake

The theme of Children’s School this week was Kids’ Government. We thought about how things would be if we were in change and what we would do to help make our wonderful home even better.

– Thunder Bridge could use more thunder

– add a tire swing, monkey bars that go in a square, and a kids’ zipline to the Children’s School playground

– we should probably elect a kid president to help out

– no more litter: we can help clean it up and people who litter could go to jail for a week

– more gardens and milkweed for the butterflies

– create a zoo for mythical monsters

We may be small, but we are mighty and happy to help.

Please don’t hesitate to call on us whenever you need an extra (small) pair of hands. As the future of Chautauqua, we want to make our community as fantastic as possible.

We’re coming back next year … YOU BET!

Hill, more than eager to read the letter, said he understands how important opportunities like this are for the kids themselves.

“For any young person, the value of being heard is a big deal,” he said. “I hope they feel like coming here, symbolically, they’ve (had the opportunity) to be listened to.”

And just in case there were any concerns about how many kinds of mythical monsters should be in the zoo, Yellow Room’s Oliver Zachry had it all taken care of.

“It’ll be for all of them,” Oliver told Hill. “Even dragons and giants and all the scaries.”