There’s no favorite performance or audience for storyteller David Gonzalez. He stopped keeping track once he realized he had performed 5,000 times.

“I love it all,” Gonzalez said. “I’ve been doing this professionally for 35 years, and the joy is in the connection of whoever is there.”

Gonzalez will connect with Chautauquans when he performs his show “Cuentos: Tales from the Latino World” at 5 and 7 p.m. Tuesday in Smith Wilkes Hall as part of the Family Entertainment Series. Storytelling is for all ages, Gonzalez said, although there is something special about being a child’s first theatrical experience.

While Gonzalez is a native of the Bronx, his family hails from Cuba and Puerto Rico. “Cuentos” is a collection of stories — some from his own life, some that were told to him, and some that he read in anthologies of Caribbean folk literature. The performance will include audience interaction, comedy, guitar music and song, and “quite a bit of Spanish.”

A professional storyteller, poet, playwright, musician and public speaker, Gonzalez came to performing by way of music therapy, for which he earned a doctorate from New York University.

While working with children whom he described as having emotional troubles and learning disabilities, Gonzalez encountered the work of mythologist Joseph Campbell. In turn, Gonzalez began to incorporate stories into his work with children.

“I found that it enriched not only my relationships with them, but the whole creative space around us, and I found great joy and pleasure in telling stories,” Gonzalez said.

It wasn’t until his mid-20s that Gonzalez met a professional storyteller, and he began accompanying her as a musician. Eventually, he became confident enough to perform as a storyteller himself.

The move toward storytelling created a rich career beyond his “wildest dreams,” Gonzalez said. In 2010, the Joseph Campbell Foundation, a nonprofit dedicated to honoring and continuing Campbell’s vision, named Gonzalez their fellow of the year.

Other career highlights include being nominated for a 2006 Drama Desk Award for his production of The Frog Bride at Broadway’s New Victory Theater; taking his Sleeping Beauty on a national tour and to the Kennedy Center; and being a featured performer at the National Storytelling Festival. Also a cultural ambassador for the U.S. Department of State, he has performed internationally.

Human beings are “storytelling creatures,” Gonzalez said, and a professional storyteller can “hone that innate ability to a very fine level.” Eric Bogosian, Lily Tomlin and Whoopi Goldberg are among the storytellers Gonzalez counts as inspirations for their crafted solo performances.

Gonzalez sees himself as “an artist who entertains and who educates.” What he is not is an actor, although there are similarities. Theater and storytelling are “like different shades of the same color,” he said, with storytelling being more text-oriented.

“When a great storyteller is performing, it really creates another world before our eyes and ears, so it’s transporting in the same exact way that great theater can be,” Gonzalez said.

Fairy tales, myths, historical stories and personal recollections all provide source material for Gonzalez, who described his inspirations as “eclectic.” Not too long ago, he even did a piece about the environment, drawing upon verbatim interviews and performance poetry.

Gonzalez said he loves to have fun and “share imagination,” and is looking forward to performing at Chautauqua for the first time.

“Being a storyteller, you’re very much aware of the audience; there’s no fourth wall,” Gonzalez said. “We’re very present with whomever is there, and in a place like Chautauqua, where there’s a cultivated audience, where there’s a sense of community and shared values, I will feel that and I will be able to ride on the strength of that intelligence and that love.” 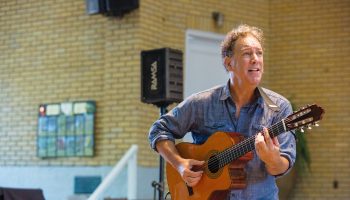