The book, a follow-up to his 1993 novel Nobody’s Fool, came about because Russo’s literary agent kept “begging” for him to return to the fictional setting of North Bath, New York.

“With each of those urgings that I’d get from him to return to that world, I’d say, ‘No. I just don’t do that. I’m not into sequels,’ ” Russo said. “I had totally planned on never revisiting these characters — not because I didn’t love them — but when I finish a story, the story is over, and I move on to something else.”

Regardless, Russo found his way back to North Bath and thought up a new series of adventures for his protagonist, Donald “Sully” Sullivan.

Russo will discuss Everybody’s Fool, the Chautauqua Literary and Scientific Circle selection for Week Six, at 3:30 p.m. Thursday in the Hall of Philosophy.

Russo is the author of numerous novels and short story collections, including Empire Falls, which won the Pulitzer Prize for Fiction in 2002. His most recent book is Trajectory, a collection of stories published in May.

The 23-year period between writing Nobody’s Fool and Everybody’s Fool changed Russo’s approach to Sully and the community of North Bath, he said.

Russo said in that time, there have been “various manifestations of evil in our world” that have changed his outlook, such as the 9/11 attacks. Watching his daughters grow up and start families of their own also made him somewhat worried and terrified, he said.

The result is a “tougher humor,” Russo said, one that “acknowledges the existence of evil in our lives.”

“So 23 years later, my world has changed, and that’s made me much more cognizant of that, not just in terms of myself and my family, but also my community,” Russo said.

Those manifestations of evil had a direct impact on his approach to Everybody’s Fool, Russo said.

“As a result of that, you have a Richard Russo novel that, strangely enough, has serpents in it,” Russo said. “Which is hard to imagine in the earlier years of my career. But the serpent is definitely in the garden in this book.”

The book features a literal snake handler, as well as characters who are snaky and serpentine in their intentions.

Sherra Babcock, vice president and Emily and Richard Smucker Chair for Education, is a longtime fan of Russo and said his sense of humor drew her to the book. She said it seemed like a perfect choice for Week Six, the theme of which is “Comedy and the Human Condition.”

“His book makes me laugh out loud,” Babcock said. “It really does. But the book also would have been wonderful for Week Seven.”

Week Seven’s Theme is “The Nature of Fear.”

“When you read it, you will understand,” Babcock said.

Despite the influence of malevolence on Everybody’s Fool, Russo believes a sense of humor is essential for approaching darkness. He said he wishes there was more humor in the world, particularly among “literary” writers.

“Literary fiction can be humorless at times, and I think that humor is absolutely vital,” Russo said. “The darker the times, the more important the humor.” 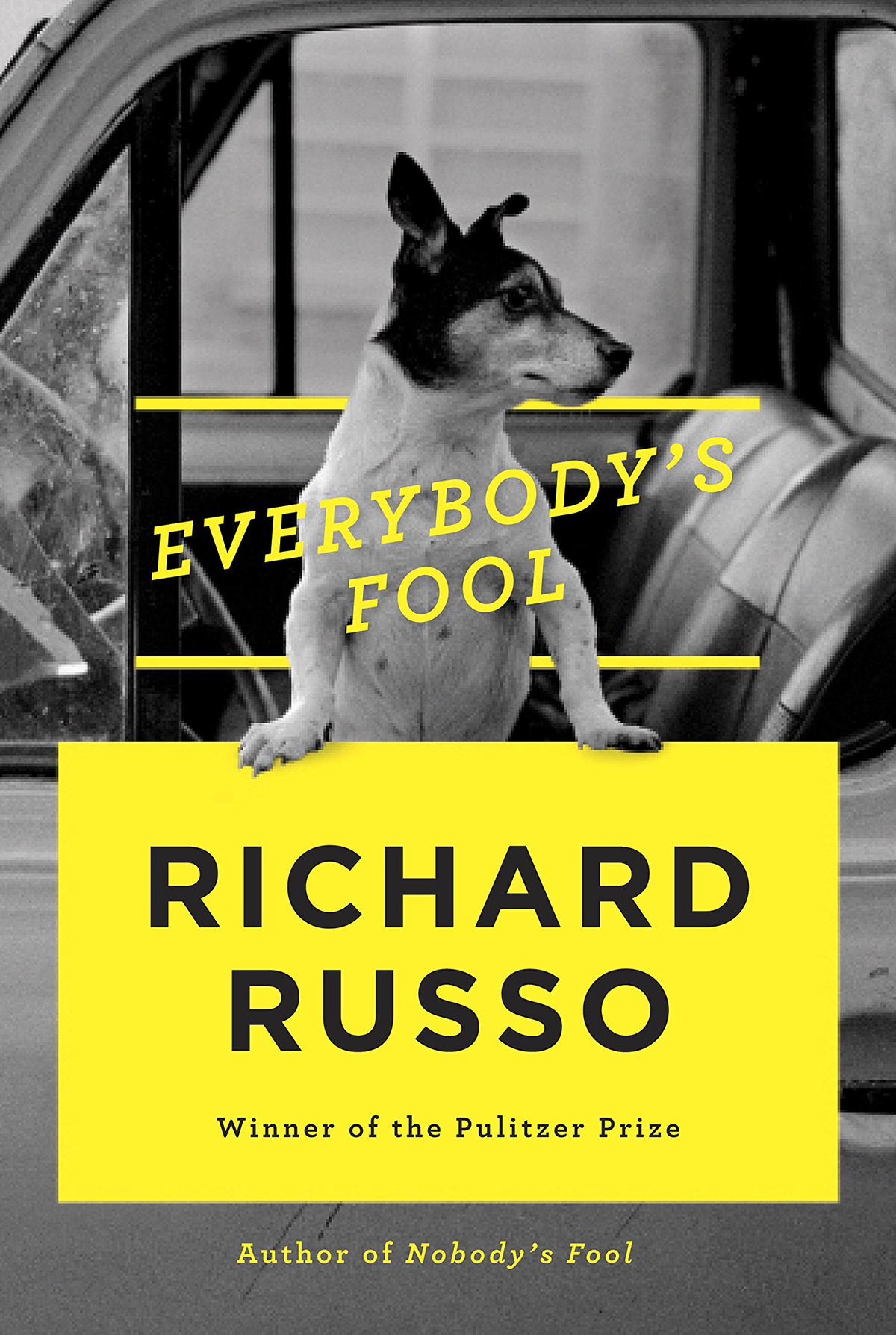 Russo said he learned this from Mark Twain, whose work showed him “that you can go to some pretty dark places, if you go there armed with humor.”

Twain’s The Adventures of Huckleberry Finn is a good example of this, Russo said. It’s a book about poverty, ignorance, violence and racism — “genetic threads that are woven into the American character,” Russo said — but Twain makes it an enjoyable and enlightening experience.

When he read Twain as a graduate student, Russo said he felt like he could follow Twain into the darkness, and it helped shape his sensibilities as a storyteller.

“But if I was asked to go there with some other authors who happened to be humorless, I discovered that I wasn’t willing to follow those other writers nearly as far,” Russo said. “And certainly with nothing like as much pleasure as I got from reading Huck Finn.”

The world has become a darker place, and while he may not have planned on returning to the community of North Bath, Russo said he still found some delight in getting reacquainted with Sully.

• On Beauty by Zadie Smith

• The Adventures of Huckleberry Finn by Mark Twain

“I love him,” Russo said. “He was based on my own father, so I have all kinds of reasons to love him, to love that character.”

Russo said he doesn’t know if he has any further plans for Sully, but there’s one thing he’ll never do to the character: limit his freedom. In Everybody’s Fool, Sully is in his 70s and his health is in decline.

“The one thing I don’t want to do is to write a book with Sully at 80, or Sully in a nursing home or assisted living place,” Russo said. “Sully is all about movement. He is his own kind of cautious optimist, but what he’s optimistic about is finding the next barstool.”

Russo said the nature of Sully’s character is rooted in his “self-defeating, but always interesting, independence,” and he never wants to steal “his hard-won freedoms from him.”

“That’s what makes him him,” Russo said. “I would never rob him of those things.”

If he returned to the setting of North Bath, Russo said, he’d likely focus on another member of the community — perhaps a minor character. He said that both Nobody’s Fool and Everybody’s Fool are focused on community. Sully thinks of himself as “kind of a loner,” Russo said, but he’s actually “right at the center of the town.”

“Despite his cherished freedom, you almost get the sense that this town will be much, much diminished when he dies,” Russo said. “And when he doesn’t walk into (the bar) anymore, that will be a sad day for the town. Just about everybody needs his good cheer, his kindness — they need his humor. They certainly need his humor.”

Russo said that this idea is true of Sully and other characters, such as Douglas Raymer and Miss Beryl, who don’t realize they’re “the heart and soul of that town.”

People like to think of themselves as “independent contractors,” Russo said, but he thinks that Nobody’s Fool and Everybody’s Fool prove otherwise.

“I think both of these novels are really about the kind of invisible ties we have to each other that go unacknowledged,” Russo said. “And because they’re invisible, we don’t always know just how big a part or role we’re playing in other people’s lives.”

Russo said he hopes his characters continue to play a part in his readers’ lives, even long after they’ve finished his books.

“If these characters are so real that you’re still thinking about them a week later, a month later, a year later, looking back on them with fondness and wishing there was a way to enjoy their company again for a while — that would make me very happy,” Russo said. “I just want these people to be as real as the people we know in our real lives.”