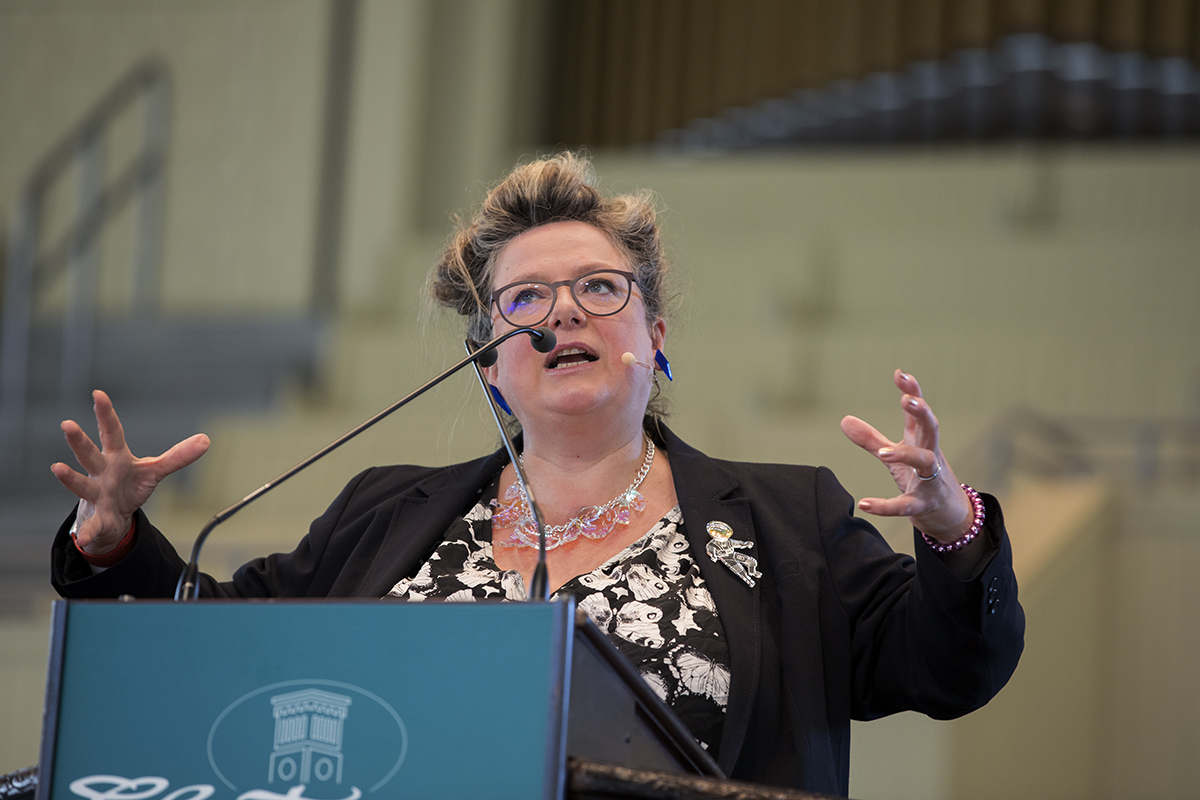 Many Chautauqua speakers use video clips to help convey their points. But all Sophie Scott needed was some audio.

Introducing her Wednesday morning lecture with a recording of two BBC cricket commentators devolving on-air into uncontrollable laughter, Scott stood by as her Amphitheater audience listened.

“Aggers, for goodness sake, stop it,” Brian Johnston implored his colleague, Jonathan Agnew, as both men struggled to speak over the sound of their own gasping chortles.

Scott, the deputy director of the University College London’s Institute of Cognitive Neuroscience and a self-proclaimed “stand-up scientist,” set the tone for her part of Week Six: “Comedy and the Human Condition” with the recording; it was to be a morning of serious content, delivered with humor.

“There are seven important lessons that we can take away from the science of laughter that listening to people trying to broadcast while desperately trying not to laugh can tell us a bit about,” Scott said.

By the end of her lecture, Scott’s audience would be well versed in each one.

“Laughter is actually an example of what’s called a nonverbal expression of emotion,” Scott said. “And it’s like a scream of fear, or a growl of anger, or a disgusted ‘bleugh’ sound. It’s more like an animal call than it is like speech.”

Breathing happens when the ribcage expands and contracts the lungs, pulling air in and pushing it out as needed. The same mechanism can also be used to vocalize speech by pushing a “very finely controlled flow of air” out of the voicebox.

But there is a third function, too, more powerful than the others.

“What laughter does is it takes those same muscles and it makes them do single, large contractions: squeeze, squeeze, squeeze,” Scott said. “And each of those squeezes” — she exhaled for effect — “just forces air out, and you get a laugh: Ha, ha, ha.”

The interesting thing, from an evolutionary perspective, is that this oft-involuntary action takes precedence over more essential life functions.

“If there was a competition between … breathing and speech, and laughing, laughter always wins,” Scott said. “It will stop you breathing. It will stop you speaking. It’s just squeezing air out of you; it is trying to kill you.”

Humans aren’t alone in this behavior. Apes do it, and even rats have been shown in lab studies to squeak a certain way when played with or tickled.

“The thing that is interesting about laughter in humans and in other animals is that it has these roots, actually, in tickling,” Scott said. “Across the board, where you find commonality amongst laughter, it’s when babies (are) tickled, normally by their parents, and also in play.”

“We are 30 times more likely to laugh if there is somebody else with us,” Scott said, “than if we are on our own. … It’s primed as a behavior by other people being around us.”

While other emotions aren’t particularly contingent on specific social contexts, laughter has an inherent communal character to it.

“You can find yourself laughing on your own — I’m not saying it never happens — but it primarily happens when you’re with other people,” Scott said. “It’s an emotion, but it lives in social interactions.”

“You are much more (likely) to laugh if you are already laughing,” Scott said. “And that’s because laughter is contagious.”

Like yawning, coughing and even blinking, laughter can be “caught” from other people.

Not all contagions are made equal, though.

“You’re much more likely to catch these behaviors from someone you know than someone you don’t know, (and) that’s because it’s affiliative,” Scott said. “These contagious behaviors … are things we do to show, in a low-level way, to people we know, that we know them.”

Chimpanzees can also catch yawns, even from humans; dogs do, too, although they need to know the human first.

“You’re seeing something, which is behavioral priming,” Scott said.

Prompted by tickling or peek-a-boo, growing babies are quick to realize how important laughter is. Even before they have verbal communication skills, they’ll intentionally make their parents laugh as a means of expression.

Additionally, toddlers “will use laughter, their parents’ laughter, to assess what a situation means.”

This was demonstrated in an experiment where a toddler and their mother were put in a situation “where someone starts behaving strangely,” such that the child doesn’t know how to react. In the absence of prior training on how to deal with this unforeseen situation, the toddler uses the parent’s laughter (or lack thereof) as a cue for whether to be scared.

Unlike their elders, though, babies do not find the laughter of others contagious.

Physiologically, when the brain hears laughter, it primes itself to join in; there is a biological predisposition for contagious laughter. What’s more, studies show that “the more a rat is tickled when it’s a baby, the more that rat will laugh when it’s an adult.”

“Rats who laugh a lot are more optimistic rats … (and) it does at least suggest from a basic science perspective that there could be some really important individual differences in adults and how they use laughter, and how that relates to their experience,” Scott said.

The BBC correspondents from the opening audio clip were laughing due to an “absolutely terrible joke”; clearly, laughter is not entirely about funniness.

“Out there in the world, interestingly, laughter is still not linked to humor as much as we think it would be,” Scott said. “Now I’m not saying we don’t laugh at humor, … (but) if you look at people, and you observe them, what you find is that it remains a social behavior … and actually, most of the time, in … conversations, people aren’t laughing at jokes. People are laughing at statements.”

The point of laughter, then, is more about “social bonding” than anything else: laughter as a signal of familiarity, amicability, agreement or understanding.

“It’s an extremely nuanced way of actually (doing) a lot of the emotional work of a conversation,” Scott said.

In that sense, laughter can be as much about covering up negative emotions like anger and sadness as about expressing positive feelings.

Like a “hall of mirrors,” laughter can transfer a wide array of different meanings from the laugher to the listener; finding a joke funny is only one of the many reasons for which it might happen.

“(Laughter is) clearly a very important signal showing affection and affiliation,” Scott said. “It’s clearly a very nuanced social behavior that we can use to make interactions go a lot more smoothly.”

Citing a study where couples were hooked up to polygraph machines and made to discuss uncomfortable topics, like problems they had with their partner, she noted that mutual laughter can defuse an uncomfortable situation — but only if both partners are doing it.

“We actually can use laughter in close relationships … to feel better together; you can negotiate your way out of an unpleasant emotional state into a positive emotional state using laughter,” Scott said.

And unlike other emotional behavior regulators, like anger or dominance, laughter is a “very safe emotional place to be.”

However, Scott said, couples laugh a lot because they’re already happy, not that frequent laughter makes couples happier; laughter is indexical, not transformative.

“We think (laughter is) about jokes, and we think it is about comedy, and it is … but it’s bigger than that,” Scott said. “It’s this incredibly ancient, inclusive social bond.”

When her dad was dying in the hospital, he pointed out to Scott and the rest of her family how much they’d laughed over the years; she thought it was strange at the time, before she’d begun researching laughter, but now it makes sense.

“There’s not a lot that will be like a signifier throughout your life of love and closeness and mutual intimacy, but laughter’s there all along with you, when you’re with people that you love,” Scott said.

“A life full of laughter,” she added, “was a life well spent.”