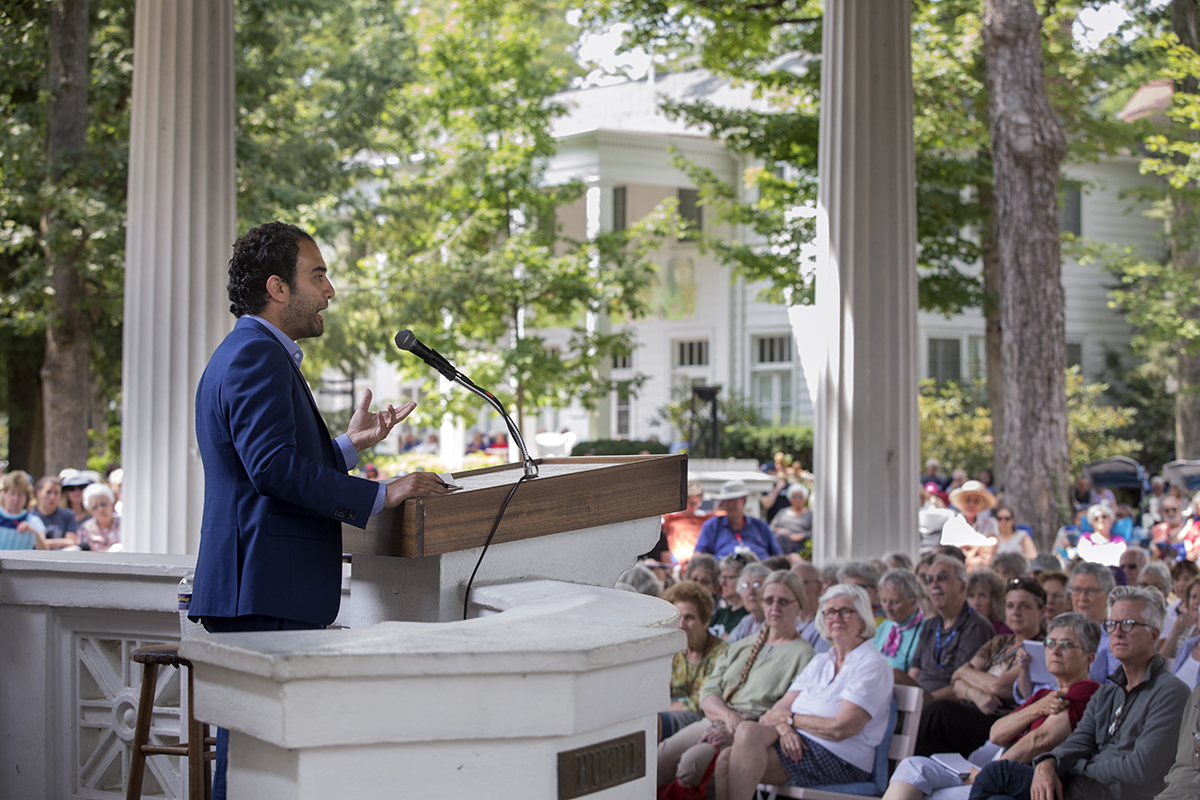 Shadi Hamid, senior fellow in the Brookings Institution’s Project on U.S. Relations with the Islamic Center for Middle East Policy, delivers his speech “Islam and Identity: How Religion Provides a Common Language in an Age of Anxiety” on Wednesday, August 9, 2017 in Hall of Philosophy. PAULA OSPINA / STAFF PHOTOGRAPHER

Americans today are experiencing a bit more anxiety than they are used to; much of it comes from the “shared disadvantage” and lack of understanding of history.

Shadi Hamid, senior fellow in the Brookings Institution’s Project on U.S. Relations with the Islamic Center for Middle East Policy, began his lecture with this idea — that things Americans take for granted, such as citizenship, are fairly new in the “scope of human history.”

This allegiance shift Hamid spoke of can be seen in the Ottoman Empire, when religious people’s identities became rooted in their denomination rather than in their nationalism.

“This fundamental shift in human history is great in a lot of ways, so we live in — at least for now — a liberal democracy,” Hamid said. “That’s great! We have freedom, we have individual choice and agency and autonomy.”

But sometimes the choices America has to offer might be too overwhelming, Hamid suggested. Curious about yoga, Hamid decided to look up local centers in his Washington, D.C., neighborhood. And within a two-mile radius of his home, he said, there were “literally 50 different studios.”

“You have to put in a lot of effort, and that can sometimes come at the expense of our contentment or happiness,” he said.

Such is the religious choice in America. Francis Fukuyama, in his 1989 essay “The End of History?,” envisions a world where all ideologies fade away at the end of history, any questions about social hierarchy and government resolved.

“What we found out is that liberal democracy has not won the day,” Hamid said. “Liberalism, in the classical sense of emphasizing individual freedom and individual choice (has created), if you will, a revenge of ideology, a return of ideology and identity and everywhere we look, there is this fundamental struggle for meaning.”

Hamid said this is why so many submovements have formed, such as European ethno-nationalism, far-right populism and Polish Catholic conservatism.

In American culture, Hamid noted, the prominence of white mainstream Christianity is quickly fading; Now “Northeastern liberal elite bastians” often see religion as “divisive and polarizing.” America, he said, must be careful what it wishes for.

“If religion declines, something else will likely take its place,” he said. “And that thing that takes its place is not necessarily going to be better or preferable.”

The religion of Islam, Hamid said, has been the primary reference point for the Middle East in its struggle for meaning. But when referencing his book, Islamic Exceptionalism: How the Struggle Over Islam Is Reshaping the World, Hamid clarified that his “exceptionalism” label for Islam doesn’t usurp other religions’ exceptionalism labels of their own.

“Anyone who feels strongly about their religious orientation is going to think that there’s something unique or distinctive about what the religion offers them, at least on a personal level, right?” Hamid said.

But currently, he said, anti-Muslim sentiment, sometimes known as “Islamophobia,” is everywhere. What people often don’t realize is the multiple forms Islam can take — “conservative, far-right interpretations (and) open-minded, progressive traditions.” This “rich tapestry of traditions” allows for not only individual, but also communal, contentment.

However, Islam has different ideas of “good” than Christian ideas popularized in America — particularly seen in its founding moment.

These formative roles of Islam’s founder made for an activism-centered holy book; the Quran is known for its “dissiden(ce) against the reigning state.” Meanwhile, the Bible’s New Testament, often compared to the Quran, was less concerned with governance and public law.

In fact, in the book of Galatians, the apostle Paul writes “Christ redeemed us from the curse of the law by becoming a curse for us.” Under this doctrine, New Testament teachings supersede traditional Old Testament laws.

And although Christianity often claims the Bible is “the word of God,” there is still a general consensus that not all portions were divinely inspired, as the book was penned by human hands. Meanwhile, Islam views the Quran as being of divine origin in the sense that every word is directly from God. Therefore, Hamid said, a “one-to-one comparison” of these sacred texts cannot be made.

“What this means in practice is that you can sort of argue for secularism in the Islamic context, but it’s harder to make that case and it’s harder for that to gain mass traction today throughout the Muslim world,” Hamid said, “because it sort of goes against the prophetic model of intertwining religious and political functions.”

It wasn’t until recent times that Islam’s role began to shift.

“Islam provided the overarching moral, legal and religious architecture,” he said. “Islam was just the order of things; no one really questioned it. It went without saying, so it wasn’t said. You didn’t have people who called themselves secularists in the pre-modern era because that idea didn’t really exist yet.”

Questions arose after Mustafa Kemal Atatürk, Turkey’s first president, abolished the Ottoman Caliphate, the final Sunni Islamic caliphate — the reign of a chief Muslim ruler — of the late medieval or modern era. Since Atatürk’s decree on March 3, 1924, Hamid said, there has been a struggle to establish “legitimate political order in the Middle East.”

The primary cause of this divide was the distinction between Islamists (with far-right terrorists on one hand and gradualists, those who advocate for gradual implementation of Islam in a Muslim country, on the other) and non-Islamists.

“What’s different about the debates around the role of religion and whether Sharia should actually have something to say about legal matters, is that it’s raw and existential,” he said. “It’s the most fundamental thing you can possibly debate, so how do you split the middle on that? It’s not something you can measure, and that’s what makes it much more challenging.”

These Middle Eastern debate topics have begun to make their way to America in recent years, inspiring questions like: “What does it mean to be American?” and “How do we relate to our own state?”

And given violence in the Middle East, for example, Egypt’s Rabaa massacre of 2013, oftentimes the suggested solution is for Middle Eastern countries to take the same transformative route as America: reformation, enlightenment, secularization, et cetera. This solution is not effective everywhere, though, Hamid said.

“It’s an odd time to be making arguments that religion has to be privatized in the Middle East or Muslims have to sort of give up this idea that Islam is going to be front and center in some way,” he said.

In this age of anxiety, Hamid said, followers of Islam are experiencing insecurity about change and struggling for “more meaning, not less meaning.”

In 2013, Hamid conducted interviews in Cairo, where people would often proclaim such deep allegiance to God that dying a noble death was fine, as long as it was inspired by a divine promise. The idea of this all-or-nothing mentality might seem strange to some, Hamid said.

“Sometimes I get in debates where people say, ‘Well, wanting to get into heaven is a pretty irrational thing if that’s inspiring you to join a political party or go to a protest or vote for a candidate,’ ” he said. “But at the same time, if you believe this is eternal salvation, what could be more rational?”

Hamid said he hoped to end on a positive note before his time was up, though. The Middle East and America, he said, do not have to convince the other of anything. Instead, they should just try to understand.

“People will continue to dislike and even hate each other over legitimate differences,” Hamid said. “My hope is that they hate each other peacefully. That, to me, is the fundamental question: How do we find ways to disagree with each other — or dislike each other; hopefully we won’t go all the way to hate — but do it peacefully?”

Just like if someone is from France, they are of French nationality, Hamid said, so it should go with religious affiliation.