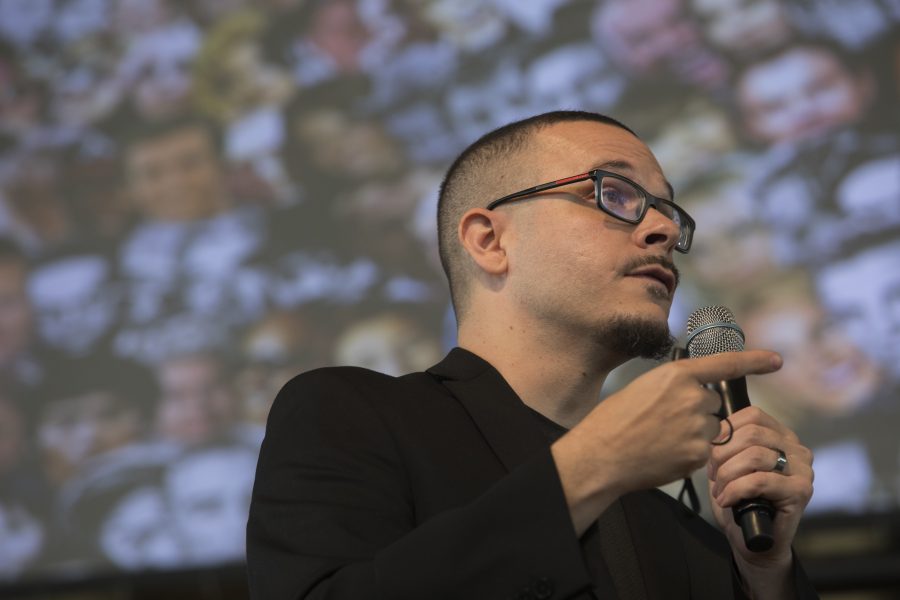 Standing before the image of an old, white, bearded man, Shaun King began his lecture.

The portrait’s significance, though not immediately discernable, would quickly be made clear.

“This is a German historian, Leopold von Ranke, who has never been to Chautauqua,” King said. “But he definitely looks like he could have been here many, many years ago.”

Though von Ranke was never a Chautauquan himself, King would present over the course of his Tuesday morning Amphitheater lecture why the 19th-century historian’s work was worthy of the attention of Institution visitors today.

But before unpacking that, King — now the senior justice writer at the New York Daily News and a member of the Black Lives Matter movement — first had to get into his own history.

In doing so, his thematic connection to Week Seven, “The Nature of Fear,” was made evident.

“The summer of 2014, I was actually not a journalist … (and) I was not even really known as an activist,” King said. “I was working for a charity on the beach in Santa Monica called Global Green. … It was a cushy, comfortable job.”

But one day, all that got disrupted.

King received an email from an old college friend. At the bottom was a link to a video.

“In New York City, there was this guy who was being harassed by the police,” King said, recalling his friend’s description of the video. “And he asked the police to leave him alone, and he says many times, ‘Please leave me alone.’ And he’s unarmed, nonviolent, and … all of a sudden, an officer comes up behind this man, who my friend described … as a middle-aged black man … and begins choking him. (The) officer wrestles the man to the ground, and you can hear the man scream out, over and over again, ‘I can’t breathe, I can’t breathe.’ ”

That man was Eric Garner.

“And (King’s friend) said … ‘Shaun, the guy dies right there on the sidewalk after being choked to death by the officer.’ ”

King had protested police brutality before — the murders of Amadou Diallo, and Sean Bell, and Trayvon Martin — but he’d never actually seen footage of the killings. And with this new incident, King at first assumed that his friend “must have left out part of the story.”

“I clicked on the link and I saw the video,” King said, “and it was just as my friend described, and worse.”

King “couldn’t shake” what he saw. Unsure of how to react, he shared the video online, hoping that “something would happen, someone would be held accountable.”

A few weeks later, it all happened again.

A second friend sent King a link to a livestream of “a kid (who’d) been shot and killed by police in a neighborhood in St. Louis called Ferguson.”

That kid was Michael Brown.

And the very next day, it happened yet again.

“I learned of a man who was shot and killed in a Walmart, literally talking on the phone with his girlfriend in the pet foods section,” King said.

That man was John Crawford.

King assumed the officers responsible would be held accountable; he was “so naive that (he) thought making people aware of injustice would lead to justice.”

He started protesting constantly, becoming less and less involved with his day job.

A few more months passed, and then King heard of yet another killing: Tamir Rice, the 12-year-old Clevelander shot by police while holding a toy gun.

And only a few days later, it was revealed that not only was no one being held responsible for Eric Garner’s death earlier that year, but that the case wasn’t even going to trial.

Things only got worse from there.

“In a matter of about four weeks, in November and December of 2014,” King said, “we learned that there would be no justice for any of the cases that we had marched for, (that) we had protested for.”

With Christmas drawing closer, King found himself “slipping into a deep funk.”

It was in this dark time that King discovered Leopold von Ranke — that old, white, bearded German whose visage had opened the lecture.

“A lot of people call him the father of the study of history,” King said.

It was von Ranke, and his work to build a detailed, annotated timeline of world history, that led to an insight that, centuries later, would give King a new perspective on 21st-century police brutality.

His timeline threw this belief into flux.

Thus, if graphed, human social progress doesn’t increase exponentially; rather, it looks like a jagged line graph, sloping up and down, back and forth.

Technology always improved, von Ranke said, but mankind did not.

So, King said, the steadily improving model of human progress — the exponential curve — simply does not make sense given the realities of human suffering.

The trans-Atlantic slave trade and the scars it etched into its victims’ backs over three centuries; the Holocaust and the mounds of empty shoes left lying, unclaimed, in its wake; the Rwandan genocide and the rows and rows of skulls that still line museum shelves today; these events happened, in the grand scheme of human history, just yesterday.

So, King asked, how could it be possible that mankind “is steadily getting better?”

“Humanity is not in a steady crescendo of quality,” King said. “Our technology — our cellphones, our televisions — are rapidly changing, but the quality of humanity is not steadily rising.”

Instead, human quality of life goes through “peaks and valleys” over time. And, he added, “we’re definitely not at that top peak” currently.

“If you are operating under the assumption that we are right here,” said King, pointing to the zenith of an exponentially curving line, “then you won’t feel the pressure to fix the problems that we’re experiencing.”

“I need you to understand,” he continued, now pointing to the bottom part of an up-and-down line, “that we are in one of these dips.”

Last year, King said, 102 unarmed black men, women and children were killed by police officers (and that’s using the widest possible interpretation of “unarmed” possible). That’s a frequency of lynching — and King was clear that these are, indeed, lynchings — unseen since the presidency of William McKinley at the turn of the 19th century.

In the ’70s and ’80s, the U.S. prison population exploded following the initiation of the so-called war on drugs — a policy that, as President Richard Nixon’s director of policy has since admitted, was an explicit attempt to “criminalize blackness.”

“If we’re getting better and better, how do we explain … that the United States currently has the highest rate of imprisonment of any country in the world, right now?” King said. “Not only that, (but) the United States currently has a higher rate of imprisonment than South Africa did during apartheid” and, some historians think, possibly even more than any other country “in the history of the world.”

The exponential model of human development cannot explain these things, he said, because it’s wrong. Humanity is not always improving; it can, and does, get worse.

Humanity is not in a steady crescendo of quality,” King said. “Our technology — our cellphones, our televisions — are rapidly changing, but the quality of humanity is not steadily rising.”

As further evidence of this decline, King played for his audience three videos, each one depicting a different instance of police brutality rendered on the bodies of African Americans — “the criminalization of blackness in America,” he explained.

The first took place at a suburban Texas pool party, where a white policeman drew a gun on two young black men after they tried to help a female friend pinned underneath the officer.

The second occurred in a South Carolina classroom, where a student refused to give her phone to a teacher and as punishment had a bodybuilding officer called on her, who immediately threw her six feet and slammed her to the ground.

The third was set at a Donald Trump rally in North Carolina, where a black protester was brutalized — in front of six motionless uniformed officers — by a Trump supporter who then, in a televised interview, threatened to kill the protester next time.

These videos, King noted, reveal the flaw in assuming that human beings get steadily better over time.

“We are living in a dip in the quality of our humanity … (and) here’s what’s alarming: Dips can last for years, or decades, or centuries,” King said. “In the example that I gave earlier, of the trans-Atlantic slave trade, it lasted for nearly 300 years. You will never find yourself out of a dip that you don’t acknowledge that you’re in.”

“When there is an introduction of an innovation that disturbs the primary power structure in the country,” King said, “ugliness follows.”

The end of slavery presaged the worst era of lynching in human history. The civil rights movement led directly into the rise of mass incarceration. And the dip America is in now?

Preceded by the 2008 election of a black president.

“We introduced a great innovation to the history of our country,” King said. “Forty-three white men, one extremely unique black man. And guess what? It really disturbed people.”

And there was one person in particular whom it disturbed: a man who was, at the time, a mere reality TV star.

“Had we not introduced such an innovation (as President Barack Obama), there was no possible chance that Donald Trump was elected president,” King said. “When you introduce an innovation, it creates a disturbance in how the country operates, and it goes into dip.”

And now, he concluded, “we are living in this dip.”