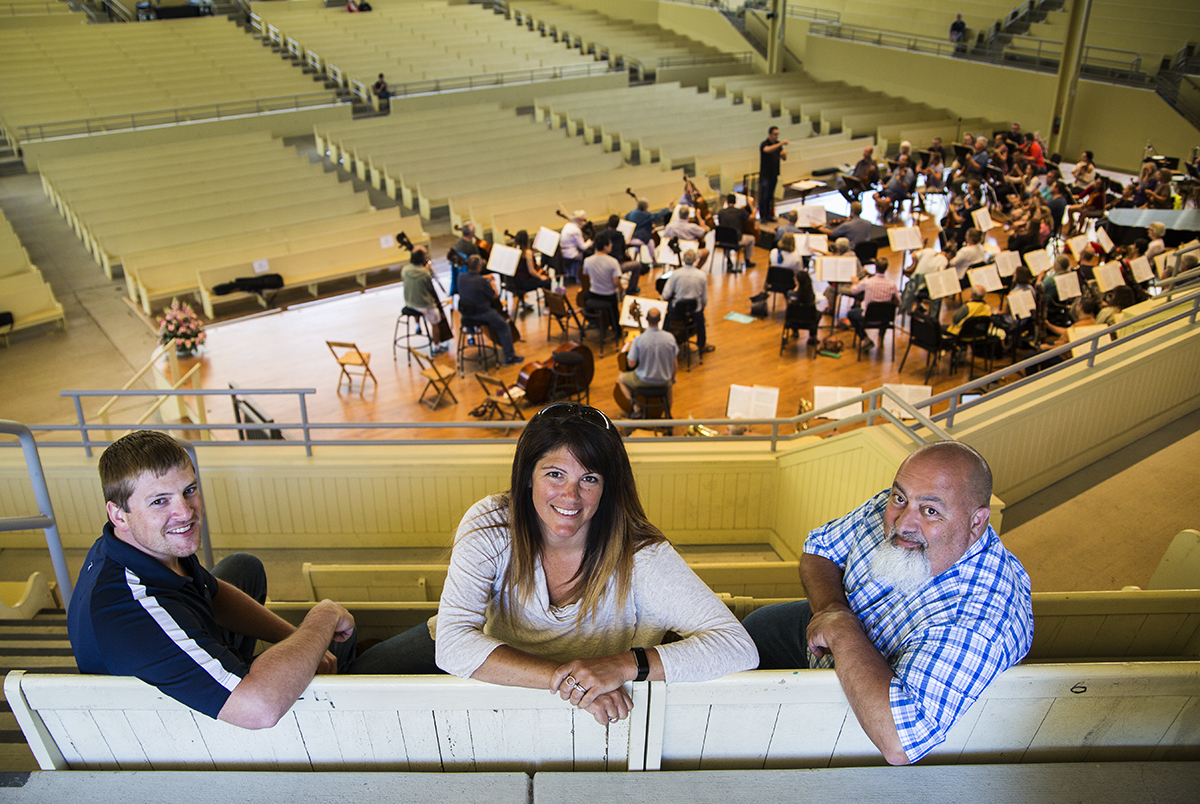 From left Ben Loeffert, Jen Joslyn and Mark Ceppaglia pose for a portrait in the Amphitheater on Tuesday, Aug. 9, 2017. ERIN CLARK / STAFF PHOTOGRAPHER

Chautauquans present for the opening of the 2017 season will recall that after an occasionally frenzied late spring, the new Amphitheater was ready to welcome everyone for the beginning of the season.

Many may not realize that a small crew of stalwarts from construction manager LPCiminelli and a few subcontractors have remained on-site, largely sequestered out of sight in a makeshift office deep in the bowels of the new Amp. Most of them have been on the job here for most or all of the construction.

“Basically,” he said, “we have been working over the summer to finish what wasn’t essential for opening day. As we counted down to opening day in June, we developed a punch list of items we could complete during the season without interfering with everything that goes on in the Amp.”

Some examples: installing lights in the attic, wall panel heaters for the winter and electric panel directories, and making small adjustments to plumbing, countertops, doors and doorframes.

Ceppaglia has been with Ciminelli since 2005. Day to day over the winter, he was the highest-ranking company official on-site. Ciminelli Vice President Steve Dechert, the project executive at company headquarters in Buffalo, and President Frank Ciminelli visited regularly, Ceppaglia said.

“On a project of this size, scope and sensitivity, Frank’s reassurance was critical to staff morale,” Ceppaglia said. “It was important that the boss would take time to visit and talk to the troops.”

Others making regular inspection trips included Chautauqua Institution Board of Trustees Chair Jim Pardo and other board members.

“That’s a tough board,” Ceppaglia said. “After our first meeting with them, I came out shaking. But once they knew we were good and were going to build them a great new Amp, they could not have been more supportive. Their first and last words were always ‘What can we do to help you?’ ”

Fourteen-hour days were routine for Ceppaglia and many of his associates. And while many have assumed last winter was relatively mild because the lake did not freeze as solidly as usual, Ceppaglia said he kept track, and there was 50 percent more snow than in a typical year on the grounds.

“Still, the biggest weather-related problem was the freeze-thaw cycle,” he said. “And there was a surprise nor’easter that blew in around the Ides of March. That did make things tough for a couple of days.”

Ciminelli staff estimates they conducted orientation sessions for 1,400 workers for the Amp project. The daily average of workers present on site reached a high of 170 at peak construction periods. Ceppaglia lived in a rented house on the grounds during his off-season time here.

Ceppaglia said that at times, his company dispatched extra staff to expedite progress, like when roof structures over Gates Two and Three were unexpectedly delayed and during the installation of the benches — especially in the bowl.

“We imported our own staff to sweep and clean the site, freeing subcontractors to spend all their time on their specialties,” he said.

Delivery of some new Amp benches was delayed, and the pre-season plan was to swap out replacements when the permanent benches were delivered. Ceppaglia said that plan was scrapped. The new benches will all be installed after the season.

“We concluded it would be too disruptive to do it during the season,” he said.

When Ciminelli finishes its work on the Amp project after the season, Ceppaglia will move on to the $800 million Montreign project in the Catskill Mountains region.

Ben Loeffert, a six-year Ciminelli veteran, served as project engineer and de facto deputy to Ceppaglia on the Amp project. Loeffert got his bachelor’s from the University of Buffalo and secured an internship at Ciminelli through one of his professors who was a company vice president of construction management. A native of the Buffalo suburb of Lockport, Loeffert has lived the Amp project for 11 months.

Loeffert has lived in a rental house in Bemus Point and has enjoyed fishing Chautauqua Lake on the few occasions he had a day off. He mostly worked at least 12 hours a day, and covered for Ceppaglia on Sundays when the senior project manager would visit his family.

A particular challenge was protecting the Massey Memorial Organ chamber while the old Amp was being dismantled.

“That organ chamber stabilized the old Amp, and we took it down with great care,” Loeffert said. “I would say that factor made the project unique.”

Jen Joslyn helped to hold the project together by keeping the books and serving as on-site coordinator among the contractors, the architect and the owner — Chautauqua Institution. A resident of nearby Stow, Joslyn has worked for Ciminelli for 11 years, and is accustomed to juggling requirements for several large projects at a time.

Joslyn has actually been connected the longest to the Amp project. Curious to learn more, she began by attending a February 2016 legal challenge to the project in the Chautauqua County Courthouse in Mayville. She said as “a local, I was the tour guide for all the visiting Ciminelli staff and contractors. I remember accompanying them on a bus tour around the grounds, and I learned a lot myself.”

Joslyn’s older sister worked for several years as ticket taker, popcorn maker and general assistant at the Chautauqua Cinema, and for a spell in the Institution’s Operations Office.

“Just tagging along with her, I got an introduction to the Institution,” she said.

Not all Joslyn’s projects would be so close to home, so she manages to work from home several days a week on most jobs. Other requirements took her to Buffalo at least one day a week during her time at Chautauqua.

While Ceppaglia, Loeffert and Joslyn all worked mostly on project management and spent time this summer and during last off-season in offices and meetings, project superintendent Paul Hogg was the hands-on supervisor of construction crews.

“I ran the project together with Mark (Ceppaglia),” Hogg said. “He paid the bills, and I managed the work.”

Like Joslyn, Hogg began with the Amp project in February 2016. A resident of Silver Creek in northern Chautauqua County, Hogg has worked in construction management for 30 years.

“I started with ADF Construction management in Buffalo, and then when they folded I went with King Brothers, another Buffalo firm,” he said. “I did a job for Ciminelli in 2007 and was head-hunted away from King by Ciminelli.”

Hogg has done a lot of school and hospital construction jobs, but the Amp project was unique.

“This was the most complex job I’ve been around, no doubt,” he said. “But at the same time, it was fascinating. We knew right from the start we were operating under a fixed deadline. The engagement of the community was extraordinary. A lot of people watched us most days. I remember one person came by and said, ‘You’re destroying history.’ I said I thought we were building the future.”

Hogg recalls several highlights along the way to finishing the job.

“For one thing, the demolition contractor just aced the job,” he said. “He got us off to a flying start, and that momentum helped all the way through the project.”

Hogg said he would most remember a moment on the Wednesday before the season opened. He was standing at the west rim of the Amp, looking down on a beehive of activity. Crews were affixing benches to the concrete floor, sweepers were hustling to keep the site manageably clear, polishers and sanders were at work on the stage.

“The next day, I stood in the same place and couldn’t believe the transformation I was seeing,” he said. “All was in readiness for the Jamestown High School graduation ceremony that night. We made it.”

Dave McKellar has left Chautauqua already for the next job, but the Gypsum Systems project foreman said that while his major work was delayed by two months until last December, he and his crew worked constantly to finish the job by the opening of the season.

His part of the job was concentrated in the back of house: all the exterior framing and sheeting, siding, soffits, window trim and dormers. He and his crew also handled the interior metal stud framing, drywall, ceilings, doors and hardware trim.

“We were responsible for the Amp ceiling; that barrel roll ceiling is framed with heavy studs we installed, along with the interior sheeting,” McKellar said.

We knew right from the start we were operating under a fixed deadline,” Hogg said. “The engagement of the community was extraordinary. A lot of people watched us most days. I remember one person came by and said, ‘You’re destroying history.’ I said I thought we were building the future.”

McKellar stayed on the grounds; he and his crew were working at least six days a week. At times, he had 55 crew members “just on my part of the overall project.”

“There were times we wondered if we would finish on time,” he said. “On occasion we would make the decision to pull jobs out of the scheduled sequence to get us closer to the finish line. For instance, while parts of the roof were being installed, we jumped into work head on the framing for the stage. So when the roof was in, we were ahead of time on the stage work.”

Some of the issues McKellar and crew encountered sound like typical homeowner issues during a home renovation.

“When we were working on framing the ceiling, the light order was delayed,” he said. “We had to wait to get all the lighting hardware and wiring and sprinkler systems before we could close up the ceiling.”

McKellar said his firm did not hesitate “to pull our guys off other jobs to help out on the Amp. We had 40 extra people in here on some Saturdays. We had to keep the momentum going. When did we know we’d make it? It went right down to the wire.”

McKellar said two visitors to the site told him they were apprehensive about the project, but when finished, “it looked like a facelift on the old place.”