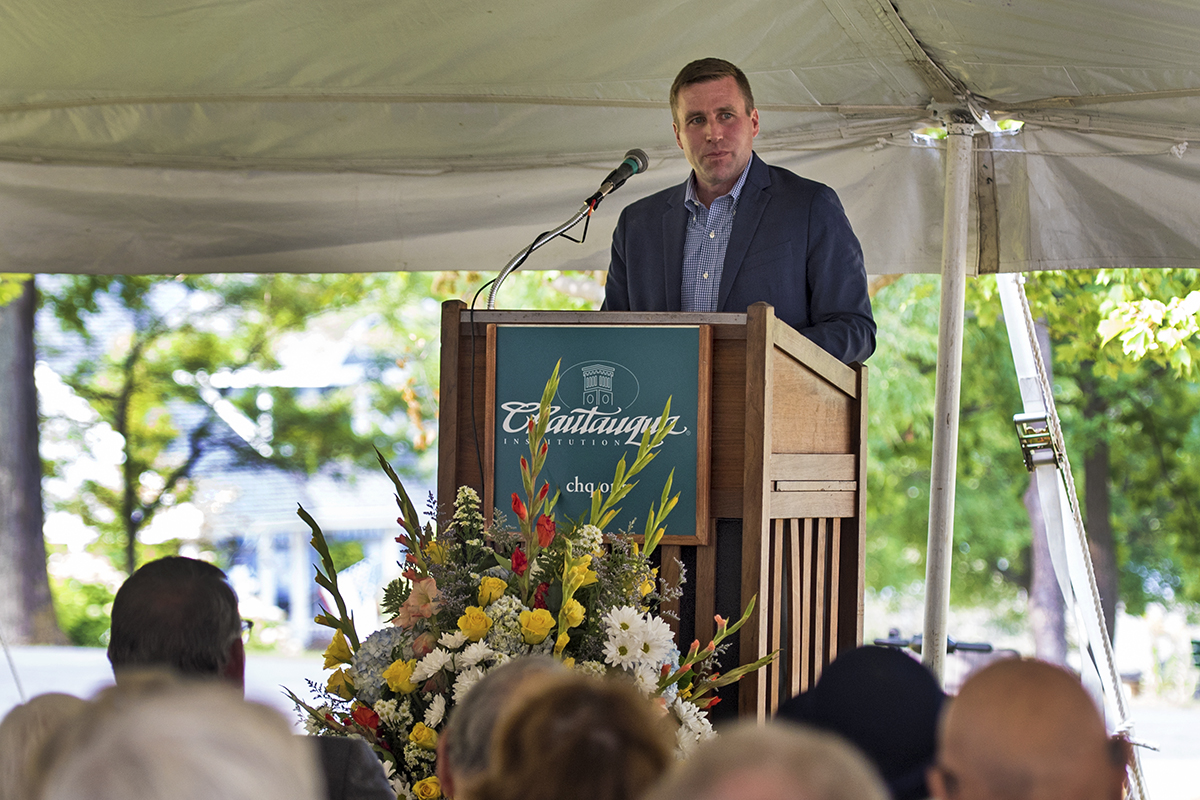 As members of the Bestor Society gathered for the annual President’s Address last Sunday, Jim Pardo, chair of the board of trustees, thanked the group for the investment they annually dedicate to the Chautauqua Fund.

“I thank you for the philanthropy that you generously provide year-in, year-out to enable the Institution to meet the challenge of ensuring its financial sustainability and to continue to present the first-class programming that makes up what the board often refers to as the ‘Chautauqua mix,’ ” Pardo said.

Members of the Bestor Society each make an annual gift of $3,500 or more to the Chautauqua Fund and account for approximately 85 percent of the funds raised.

“It’s because of you that we can do what we do at Chautauqua, so thank you,” said Jeff Lutz, co-chair —along with his wife, Cathy Nowosielski — of the Chautauqua Fund.

As the audience sat under a large white marquee tent, perched on the hill of the Arts Quad overlooking the lake, Pardo gave special thanks for the role the group collectively played during the Promise Campaign.

“As we celebrate and give genuine thanks for the delivery of that extraordinary level of philanthropy and completion of that campaign, and the successful and timely completion of the Amphitheater facility,” Pardo said, “we do so with full knowledge and appreciation that you collectively, as a community, through your actions and generosity, have honored the promise that we made collectively.”

Following Pardo’s introductory remarks and Nowosielski and Lutz’s recognition of this year’s new members of the Bestor Society, the audience was treated to a performance of Mendelssohn selections by a student octet from the Music School Festival Orchestra. The performance was met with standing ovation before President Michael E. Hill took to the stage to deliver his inaugural President’s Address.

“I am growing accustomed to the occupational hazard of following the musicians and artists of Chautauqua,” Hill began jokingly.

Reflecting on his first season as Chautauqua’s 18th president, Hill said he feels “both a briskness in the pace of this season and, at moments, as if time has simply stopped, asking us to pause and to drink in all the blessings this sacred place provides.”

“I cannot help but look around this tent overlooking the place I now call home and find myself filled with gratitude for all of you, and all who came before you, that make this special place possible,” Hill said.

In his address, Hill focused on three key points: what he believes in, how the first weeks of his first season have changed him and his thinking, and where he thinks Chautauqua is heading.

“I believe that it is again time for Chautauqua to reclaim its role as a shining example for the nation of how communities can and must come together in dialogue and community to stop the screaming from the echo chambers of left and right, to learn how to live together in a way that allows us to tackle this generation’s great issues,” Hill said.

He told the crowd that a pursuit of “muscular civil dialogue” is not a veiled way of suppressing free speech, nor is it forcing “people into a false sense of ‘niceness’ that precludes a real conversation.”

“Calling for a civil dialogue is not to put away or suppress our opinions, but rather to speak up after listening, to seek first to understand rather than to be understood,” Hill said. “ ‘Civility’ is not a codeword to lay down one’s beliefs, but rather is an even stronger tool to help us discover that the answers the world needs may just lie in the exploration of ‘the other,’ in acknowledging that no viewpoint or person holds all the truth.”

Hill acknowledged that although he did not come to Chautauqua with a “10-year plan,” he did come with a “vision thesis of what (he believes) Chautauqua can and should be for the world.”

“I believe with all my heart that we are heading into an era of reclaiming Chautauqua’s founding promise of living and exploring the best in human values, but adding to it nothing short of an unrelenting goal of changing the world for the better,” Hill said.

For Hill, watching Chautauquans this summer “wrestle with what it means to lean into difference and to genuinely want to learn how to engage a neighbor who thinks differently” has made him optimistic about Chautauqua’s ability to succeed in doing this.

He ended his address by telling the crowd that “this grand experiment called Chautauqua has never and will never work without you.”

For information about the Bestor Society, contact Tina Downey, director of the Chautauqua Fund, at 716-357-6404 or tdowney@chq.org.