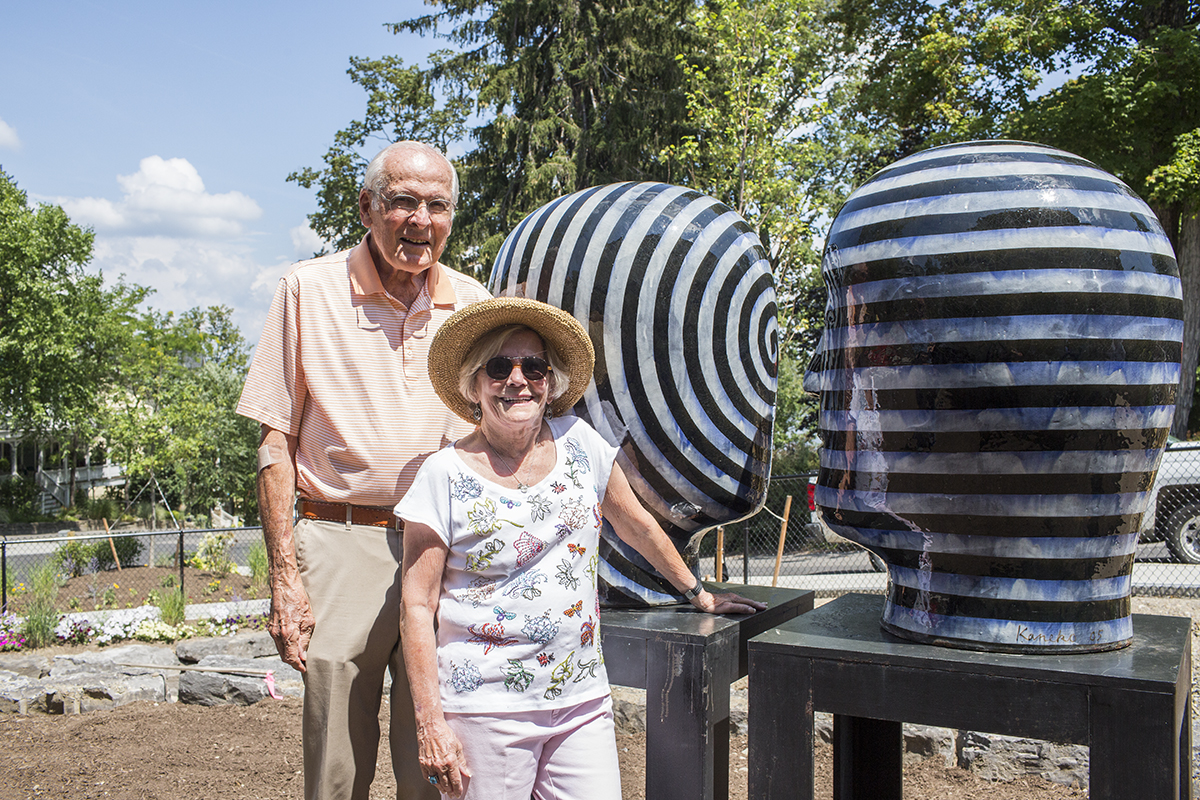 Dan and Linda Silverberg pose with their donated untitled sculptures by artist Jun Kaneko at the Amphitheater on Thursday, Aug. 3, 2017. CAM BUKER/STAFF PHOTOGRAPHER

The unveiling of a Jun Kaneko sculpture, donated by Chautauquans Dan and Linda Silverberg, was shaping up to be a dramatic moment. It was the 2 o’clock hour on Aug. 3, and the Chautauqua Symphony Orchestra was practicing for its upcoming evening performance.

“It’s Mahler’s Fifth!” Linda said as the sculpture was unwrapped. “Nothing could be more appropriate.”

It was a moment built on anticipation; the Silverbergs began the process of donation nearly a year ago. According to Dustin Nelson, director of gift planning for the Chautauqua Foundation, the sculpture was originally to be installed at the beginning of the summer, but construction on the new Amphitheater took priority and the installation was delayed.

The untitled Kaneko sculpture can be found in front of the John and Mary Anne Morefield Porch of the Amp. It’s difficult to miss the two giant, black and white striped porcelain heads that sit on platforms facing each other. Each head weighs about 250 pounds.

Kaneko, a Japanese artist based in Nebraska, has made several of these fraternal twin head sculptures, as well as other works in a variety of mediums. His art has appeared in national and international exhibitions and, according to his website, is held in more than 70 museum collections.

Judy Barie, the Susan and Jack Turben Director of VACI Galleries, said she’s been a fan of Kaneko’s work for years.

“This is a major artist — a major, contemporary, living artist — and we felt that it was just an opportunity that would raise the level of the visual arts here at Chautauqua,” she said. “It was very appropriate, the imagery of the two heads behind the Amp, where lots of thinking and ideas happen.”

The Silverbergs, she said, “were most generous in giving them to us.”

The Silverbergs purchased the untitled sculpture about 10 years ago from Maurine Littleton Gallery in Washington, D.C. They enjoy collecting art — paintings and prints, but their greatest love is contemporary glass.

“It was, if anything, selfish — because it meant that I’d get to see them during the summer every day,” she said.

The Silverbergs have been coming to Chautauqua together for 27 years. Linda had been coming for many years prior and, after marrying Dan, wanted to share the experience with him. After their first visit together, they continued to return each summer, always adding weeks to their stay. About the time they were spending four weeks of the summer at Chautauqua, Dan decided it was time to buy a house on the grounds.

Now the Silverbergs live at Chautauqua for the entire season. They invite their children and grandchildren to stay and have also brought friends to visit.

For Linda, bringing the family together is a central aspect of the Chautauqua experience.

“Having family stay connected — that’s your legacy,” Linda said. “And Chautauqua is part of our legacy as a family. We have wonderful memories of all of us being here together.”

Linda also loves the sense of serenity at Chautauqua.

“Chautauqua creates a cocoon for people who are not only open to talking about important things, but open to learning,” she said.

The Kaneko heads are a perfect physical representation of Chautauqua’s emphasis on education and thought. Linda hopes that people will stop to notice the sculptures and consider their meaning.

“Think about how much we communicate when we’re all here,” she said. “We’re talking about things that matter.”

Nelson sees the sculpture as a way for the visual arts to expand outside of the Visual Arts at Chautauqua Institution galleries.

“It’s a pretty significant artwork,” he said. “It really is going to make a statement.”

Dan said he’s just glad that the back porch of the Amphitheater has an artistic touch.

“It’s a prime location for something,” he said. “And we were pleased to be able to provide that something.”

“We have such deep affection and commitment to Chautauqua that it was our pleasure,” Linda said. “Truly.”