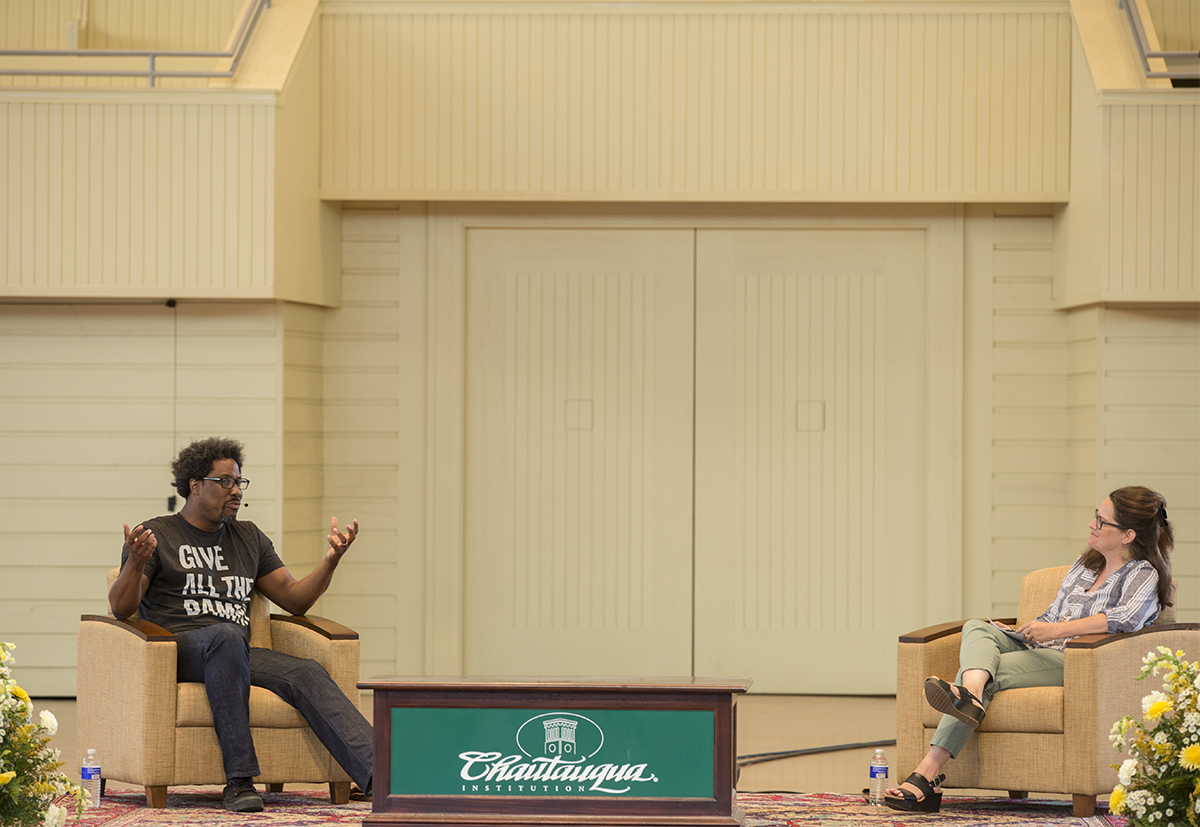 “I’m a little exhausted,” warned Kelly Carlin, prefacing the conversation she was about to moderate. “It’s day five for me at Chautauqua.”

Speaking together Thursday morning in the Amphitheater, Carlin and Bell opened the penultimate lecture of Week Six, “Comedy and the Human Condition,” with a demonstration of the two dynamics that would define their interplay.

The first was one of contrast — with a white woman talking to a black man, questions of race and gender were sure to arise.

The second was one of similarity — as both speakers are members of the comedy industry (Carlin an author and broadcaster, Bell a comic and host of CNN’s “United Shades of America”), it was through humor that they would address and work to reconcile their differences.

When Carlin prompted Bell to start off their dialogue by discussing his personal background, both of these qualities were crystallized.

“My parents split up shortly after I was born — ‘awwww’ — and they were never married — ‘oh no’ — ‘and he’s black!’ ” Bell said, imitating his audience.

Growing up, his father never really understood Bell’s sense of humor, and it didn’t help their relationship when Bell dropped out of the University of Pennsylvania and began to pursue stand-up.

“As they shouldn’t be,” Bell said. “I understand and I really understood at the time, you know, it’s not a career that has, like, a clean path.”

Bell had gotten set on that path much earlier, though, when as a kid his mother would use “Saturday Night Live” as an incentive to get him to do just about anything.

“While most other black people my age were listening to hip-hop, I was watching SNL, I was watching late-night stand-up on television … I was a comedy nerd before that was a thing that people knew what to call it,” Bell said.

A big Jerry Seinfeld fan well before the “Seinfeld” zeitgeist, Bell was still interested in more stereotypical black comedians like Eddie Murphy, but as Carlin put it, he’s “the guy who refuses to fit into any box.”

“And then,” he added, “I found once I started doing comedy that every time I tried to do the thing that you were supposed to do, either as a comedian or as a black comedian, those things always worked out horribly. And so whenever I tried to force myself down those paths, it never worked out well.”

Working the stand-up club scene in San Francisco — the city where Morton Sahl pioneered political satire, where Lenny Bruce got arrested for obscenity, near where Richard Pryor engaged with the Berkeley counterculture — Bell was able to develop his craft in a diverse, thriving comedy environment.

But Bell wasn’t rising up in the industry like he wanted; more like “tricycling through the ranks,” he quipped.

After failing to make an impression at the Montreal “New Faces of Comedy” expo and not finding fulfillment while performing overseas at Japanese military bases for “bored kids,” he knew he needed a change.

“For like five shows in a row, I just sort of bombed my face off,” Bell said. “And then (I) came back home and was like, ‘Is this what I do for a living? Is this what it is to be a stand-up comedian? I just go wherever people need jokes and it doesn’t matter what I want to do, I just have to sort of adjust to them, and what they want is what’s more important than what I want?’ ”

He stopped doing stand-up for a while, unsure of how to proceed.

Then he received some advice.

“What would you be doing if you were already famous?” Bell recalls hearing.

With full creative power and no economic obligations, what art would he make? With “The Daily Show” in the cultural milieu and Bell interested in using humor to address racism, the answer was what would eventually become his one-man show, “The W. Kamau Bell Curve: Ending Racism in About An Hour.”

I found once I started doing comedy that every time I tried to do the thing that you were supposed to do, either as a comedian or as a black comedian, those things always worked out horribly. And so whenever I tried to force myself down those paths, it never worked out well,” W. Kamau Bell said.

The show was a big success — “sold out, standing room only,” Bell said — and even if it wasn’t where the money was and people viewed him as having failed at the club scene, “this is what (he) wanted to be doing.”

“Well, yeah, and clubs, they’re looking for a very particular thing,” Carlin said. “It’s a box about this big, and if you don’t fit into that, and that’s not your thing, I mean; and yet — here you are, so, ha ha ha.”

She added, “It really shows that when you try to determine that authentic thing inside of you … it’s the only chance you have to lead you, as an artist, to the truth.

“Yeah, I really believe that,” he said. “I believe that listening to the voice inside of you, combined with paying attention to the feedback you’re getting” is how to achieve success.

It was within the context of the one-man show that Bell had (as Carlin described it) “a woke moment (him)self with a friend, about a gender issue.”

“Whatever you think you’re progressive about now, there’s something right around the corner that’s going to challenge you to be more progressive,” Bell said. “And the thing that progressives fail at a lot … is they go, ‘Wait, I’ve already accepted … all the things I’m going to accept; that’s weird.’ ”

It was those limits of progressivism that were tested  when a friend, Martha, confronted him about sexism in his racial justice-focused work.

“You can’t end racism and make sexism worse,” she said, in reference to Bell’s use of “bitch” in his show, as well as his description of Condoleeza Rice as “ugly” in an earlier joke.

At first Bell got defensive, arguing that the sexist language was acceptable in the context of comedy, especially given that other comics were far more misogynistic than he’d ever been.

Martha was patient with Bell, and didn’t call him out just for the sake of self-righteous aggrandizement. Like in a marriage, he noted, hearing out the other side is the only way to reach a greater mutual understanding.

“I really do believe in freedom of speech,” Bell said, “but I also believe in dealing with the consequences of free speech.”

Crossing cultural boundaries in his capacity as what Carlin dubbed “a modern-day anthropologist,” Bell uses his comedy as a platform to address some of those very consequences.

“In ‘United Shades,’ if you haven’t seen it, it’s like, I travel around the country,” Bell said. “The first episode we ever did, we met with the Ku Klux Klan in Arkansas and Kentucky.”

Of course, many people don’t have that sort of opportunity.

“I feel like the more important conversation could be had with the people who voted for (Donald Trump),” Bell said. “And here’s the thing … (nearly everybody) knows a Trump voter … and I’m sure there’s some here today. And most of you have avoided the conversations about Trump because you just want a nice (moment), ooh, ‘Just want to drink my cappuccino.’

“If you avoid those conversations,” he continued, “you kill America.”

Pointing to the emphasis Chautauqua President Michael E. Hill has placed on having dialogues with the differently opinionated, Carlin asked what a vision of a more communicative America might look like.

“I think we have to sort of get out of our daily routines,” Bell said. “I mean, you know, this is way outside of my daily routine, so I’ve had several awkward conversations since I’ve been here just by walking around the campus.”

Noting a conversation he’d recently had at the Brick Walk Cafe with two young people of color about life at Chautauqua, Bell questioned “how often (Chautauquans) are having those conversations with young people.”

“Not like the, ‘You’re doing a good job, (are you) going to college soon?’ Not that conversation,” Bell clarified. “I mean the conversation that’s like, ‘Do you need money for college? Let me write you a check.’ ”

Whatever you think you’re progressive about now, there’s something right around the corner that’s going to challenge you to be more progressive,” W. Kamau Bell said. “And the thing that progressives fail at a lot … is they go, ‘Wait, I’ve already accepted … all the things I’m going to accept; that’s weird.’ ”

Pivoting from the practical to the theoretical, Carlin asked Bell’s thoughts on whether comedy actually has power to change real-world issues.

“When I started in comedy, I really was like, ‘I’m here to change minds,’ ” Bell said. “At some point I met Chris Rock, he’s like, ‘You can’t change minds without a good joke.’ … And now that I’m sort of on the inside with CNN, I’m very aware that I lose my power if there’s not a punchline somewhere in there.”

That’s not to say comedy doesn’t have any power, though.

“The No. 1 most effective way to communicate is through humor,” Bell said.

That means that someone doesn’t have to agree with a comic to laugh at them, at least not if they’re actually funny. And although that might put a person in an uncomfortable situation for laughing at something off-color, Bell didn’t think that should be too big of a deal.

“I like a lot of things that I wouldn’t vote for,” he said. “But it doesn’t mean that because you like it, it’s inherently good. … We have to understand that the reason why we laugh is because we’re being tickled in a place we weren’t aware was there, and sometimes it’s a naughty place.”

Closing out the discussion, Bell emphasized that people in his Chautauqua audience are all in a “very privileged place,” both geographically and socially, and they have an obligation to use that for the better.

And he made clear he wasn’t kidding when he said Chautauquans should be writing checks to help local kids pay for college.

“If you’re here right now, that means you have won life … (and) right now in America, I feel like a lot of you are like a bunch of Clark Kents pretending not to be Superman,” Bell said. “And it’s time to cape up, and get out there, and save the world.”