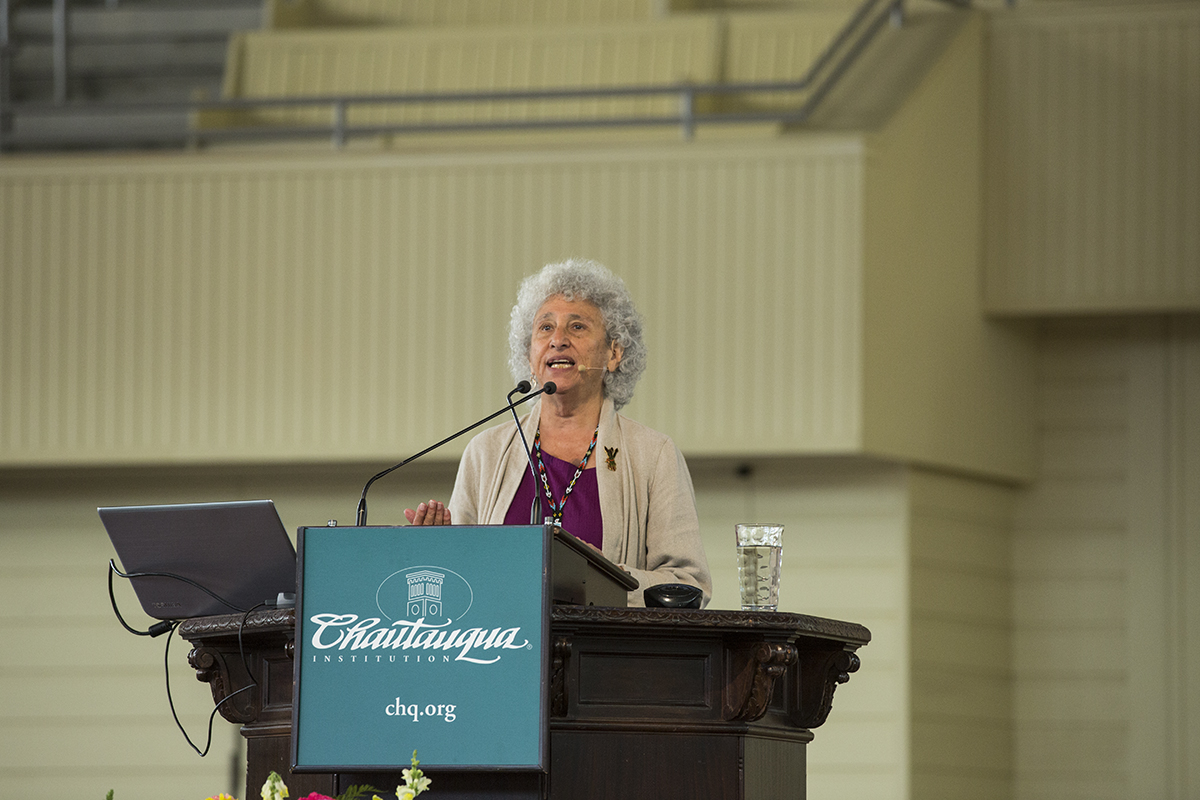 “Voting with your fork” — that’s what Marion Nestle calls it when people leverage food for political change.

After all, food is more than just a source of energy; it’s fundamentally intertwined with culture and economics and, of course, politics. Like the feminist saying goes, the personal is political, and it doesn’t get much more personal than what we put in our bodies.

“Every time you make a choice of what you eat,” Nestle explained, “you are voting for the kind of food system that you want.”

Nestle is the Paulette Goddard Professor in the Department of Nutrition, Food Studies, and Public Health at New York University and the author of — among other books — Food Politics. Speaking from the Amphitheater podium Thursday morning during Week Nine, “At the Table: Our Changing Relationship with Food,” she explored the complex relationship between what’s on the plate and what’s in the law books.

She wasn’t just educating her audience, either; she was encouraging them to get more engaged.

“If you want to have a food system that’s healthy for us and healthy for the planet, we have to be advocates for the kind of food systems that we want,” Nestle said.

And as the political problems engendered by food become increasingly pronounced, the need for advocacy is more urgent now than ever.

“If you look at … the most important worldwide issues that relate to food in the world in the year 2017, there are three,” Nestle said. “One is not having enough food; one is having too much food, to the point where you begin to develop chronic diseases; and the third is the effect of the way we eat on our environment and climate change.”

The first of these — food scarcity — is a product of American income inequality, which is reflected in disparities in human health.

“We have essentially a two-class system of diets in the United States, where people who are educated and have money are eating very healthfully and very well, and people who lack money and education are not eating so well,” Nestle said.

Every time you make a choice of what you eat, you are voting for the kind of food system that you want,” Nestle said.

And it’s an issue that extends beyond the U.S. borders. According to the United Nations, the $100 billion that Americans spend on fast food every year could put a stop to world hunger for 33 years, she said.

Yet at the same time, there is a parallel crisis of excess. Grocery stores and restaurant menus provide a greater array of choices than most people know what to do with, and the average portion has quadrupled in size since 1950. People are pelted with health advice from every side, much of which contradicts the rest, and the U.S. dieting industry has ballooned to a $64 billion-a-year behemoth.

“And then on top of all of this, we have values about food,” Nestle said. “An apple isn’t just an apple anymore — an apple has values associated with it. Is it organic? Is it imported? Is it bioengineered?”

The International Food Information Council Foundation’s 2017 Food and Health Survey, for instance, showed that significant numbers of people feel that there is lots of conflicting information about what is healthy, and that they question their dietary decisions as a result.

The tragedy of all this handwringing is that healthy eating is easy, Nestle said.

“Dietary advice is so simple that the writer Michael Pollan can do it in seven words,” Nestle said. “‘Eat food. Not too much. Mostly plants.’ Really, that’s all there is to it.”

If people are confused, there’s at least one big culprit to blame: corporate advertising. With $30 million a year spent on showcasing Pop-Tarts, $254 million for Coca-Cola, and so on, it all adds up.

“Altogether this is $30 billion a year in food marketing, usually for foods that nutritionists would never recommend,” Nestle said. “And … every penny of that is deductible as a business expense.”

Though the government does provide healthy eating guidelines, its money isn’t where its mouth is — the USDA calls for half of every plate to be fruits and vegetables, but a scant 0.45 percent of agricultural subsidies are allocated to those very foods.

This isn’t even to mention the environmental harm wrought by an agricultural sector responsible for 15 to 25 percent of greenhouse gas emissions, of which 80 percent are from animal agriculture and processed foods.

The government thus far has failed to exert significant effort to fight these trends. The impetus for change now must come from the people.

“What to do?” Nestle asked. “You have to start a movement.”

This food movement is different than other social justice movements, like those built around gender, racial or environmental equality. Its aims are more broad, its goals more general. But it has had its share of successes, too.

For instance, the spread of university “food studies” programs — the first of which Nestle helped start at New York University in 1996 — signals a growing interest in these issues. Other trends, too, provide hope: more farmers markets; increasing spending on fruits and vegetables; growing support for a $15 minimum wage, especially for food industry workers.

But it is one fight in particular that epitomizes this growing awareness of food politics.

“The one that really, I think, is the most obvious example … is the movement against sugar-sweetened beverages,” Nestle said.

As soda sales drop off and bottled water sales surge, this fight seems to be edging closer and closer to a victory on the side of public health. But with corporations like Coca-Cola funding research that downplays the negative health impacts of its products (by emphasizing exercise over avoiding sugar-heavy drinks), there is still a ways to go.

And with “soda taxes” becoming more popular nationwide, and industry spending ramping up to oppose them, this is especially true.

The idea of a tax on soda — or at least on sugar — was first proposed by Adam Smith all the way back in 1776. But in recent years, it’s picked up steam.

“In 2009, the Senate was considering a tax on sodas,” Nestle said. “And the soda lobbyists went to work.”

Though the beverage industry had spent a relatively consistent amount on lobbying for years beforehand, that number skyrocketed when the Senate began discussing a soda tax. From around $3 million a year between 2003 and 2008, to $37 million in 2009 (according to Mother Jones), industry lobbying rapidly ramped up when faced by a threat to corporate bottom lines.

“So that bill failed,” Nestle said.

Soon after, two small California towns — El Monte and Richmond — each tried to pass their own local soda taxes. But again the soda industry rallied, pouring over $2 million into fighting the proposals.

“(And) both of those failed miserably,” Nestle said.

But Berkeley ran a much more successful campaign in 2014, framing the tax as a fight against “big soda” and emphasizing grassroots community organizing.

In the wake of that victory, the policy has spread across the country, taking hold in big cities and small towns alike. And with Chicago currently taking up the charge, the battle rages on.

It isn’t just an American issue, either. Despite massive Coca-Cola investment in the country, Mexico has passed a soda tax following a “phenomenal” community organizing campaign. South Africa, Portugal, Saudi Arabia and the United Kingdom have also implemented the policy.

“In many ways, the soda issue is a social justice issue,” Nestle said.

And it is just one of several areas in which the food movement has found success. Through the actions of people who care about the issues at stake — who vote with their forks — progress is being made.

A final column from the President