In the summer of 1994, near Fort Lauderdale, two middle school music teachers were playing golf. Wilner “Wil B” Baptiste, a rising seventh-grader at the time, had no idea that the direction of his musical career would be decided by the outcome of the round.

The winner, a strings teacher, would have Baptiste as a student in his two-week summer program, where Baptiste would learn how to play his first notes on viola. Fourteen years later, Baptiste is now one half of Black Violin, the violin and viola duo known for its blend of hip-hop and classical sensibilities.

Baptiste will join the duo’s other half, Kevin “Kev Marcus” Sylvester, at 8:15 p.m. on Tuesday, June 26, in the Amphitheater as part of Black Violin’s Classical Boom Tour. 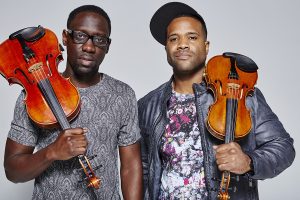 Only a few years after that 1994 summer program, Baptiste and Sylvester would meet at the performing arts high school they both attended. After going to separate colleges on full-ride music scholarships, the duo secured the Showtime at the Apollo 2005 Legend title, which helped boost Black Violin’s career to its current height.

The group’s name comes from a 1965 album by legendary jazz violinist Stuff Smith. Smith’s playing was a revelation for Black Violin, and it had a major impact on the group’s sound.

“It was really cool to just kind of hear (Smith) approach a stringed instrument in that way, just relentless, just aggressive. I had never heard someone play like that,” Sylvester said. “So it was very inspiring and it just made us really take our music to the next level and think even further about what was possible.”

Black Violin has toured all over the world and collaborated with major artists like Alicia Keys, Kanye West, Tom Petty and Aerosmith. As the two continue to spread their unique sound, they’re also trying to spread a message of inclusivity centered around music.

“White, black, purple, don’t matter. Young, old, don’t matter, they’re having a good time,” Baptiste said. “And a lot of times, people that are (at our concerts) wouldn’t necessarily be in the same room together.”

That message is personal for Baptiste, who hasn’t found the mainstream classical music world to be very inclusive.

Baptiste and Sylvester are also using their musical platform to dispel the stereotypes that they defy.

So, Sylvester wants people to come to the show, enjoy the music and have a good time — but he also wants listeners to leave having gained something.

“I want you to just go and leave this show, and whenever you see someone that looks like me, you’re not thinking anything,” he said. “You’re just looking at this person as a human being.” 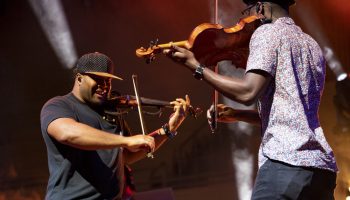 Impossible is possible: Black Violin to return to Chautauqua with high-energy fusion of hip-hop, classical music