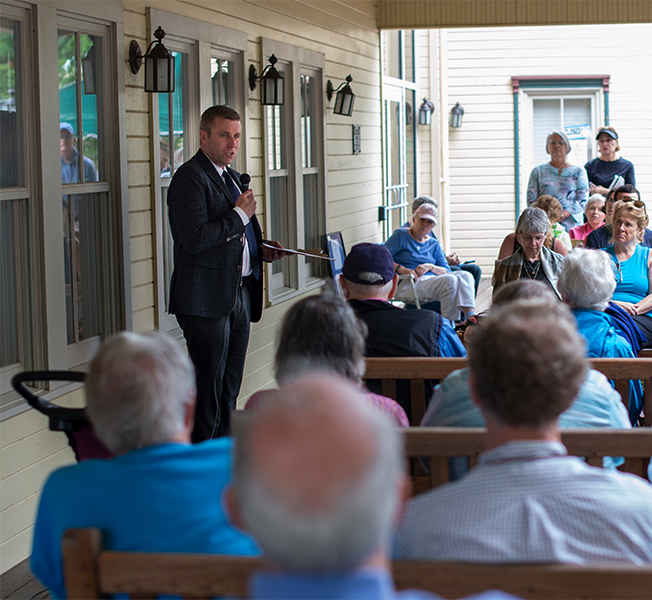 President Michael E. Hill led the first Chautauqua Institution Leadership Porch Discussion Wednesday at the Hultquist Center, where he offered an opportunity for Chautauquans to voice questions, concerns and general feedback for the first of many times this season. In his talk on “Strategic Planning Process & Opportunities for Engagement,” Hill provided a comprehensive Q-and-A forum that is a key component of the new planning strategy.

Feedback offered by residents and visitors at the Wednesday meeting will be added to the questions and concerns gathered thus far from gatherings hosted by members of the board of trustees in intellectual hubs around the country such as Chicago, Pittsburgh, Cleveland, Atlanta, North Carolina and Florida, as well as information gathered by the Institution’s online survey and portal essence.chq.org. Hill said this gathering of information, both from within the gates of the Institution and without, is the first step in determining the rest of the strategic plan, which will conclude at the sesquicentennial in 2024.

“If just a few of us sit in the Colonade and write up a strategic plan, it will fail,” Hill said. “Your participation is a key aspect of our decision- making.”

In addition to the Wednesday meetings, Hill, Chautauqua Institution Board of Trustees Chairman James Pardo and Laura Currie, chair of the Strategic Planning Working Group, will host feedback sessions at 3:30 p.m. every Thursday in the Hall of Christ, where members of the community will be encouraged to voice concerns as well as answer questions about their experiences at and visions of Chautauqua.

The recently embarked upon strategic plan includes a campus master plan, involves a golf course master plan and a waterfront management plan; a security assessment and plan; a diversity and inclusion plan; a strategic financial plan; and positioning research.

On Wednesday, Hill jockeyed questions ranging from comprehensive ticket pricing to potential housing development across NY 394, to expanding the speakers and conversations within the Institution politically. Additionally, Hill spoke about his hope to eventually expand the length of the season in order to increase revenue needed to develop and increase the amount of jobs offered in Chautauqua County.

“If Chautauqua changed from a three-month season to a six-month season, it could potentially cut poverty in the county by 40 percent,” he said. “We have $1 billion in assets, over 750 acres that lay fallow for a quarter of the fiscal year, and we are looking to change that.”

Hill said that he would love to see an expanded season that would allow for extended workforce development, particularly in the area of food service, instead of having to retrain employees every year and then have many of them leave to return to college before the end of the season, which can cause staffing shortages.

One of the most important pieces of the strategic plan is gathering ideas on how to expand the name of Chautauqua.

“A lot of people say that once we get people here, they get hooked. But it’s the getting them here that is the problem,” Hill said.

He hopes to expand the knowledge of Chautauqua across the nation through a few different avenues: speakers providing original lectures that will draw national media coverage, selling recordings of interfaith lectures to places of worship looking to become more inclusive, and constantly creating forums in which current, controversial issues can be discussed.

Through the conversations and feedback gathered during the strategic planning, Hill hopes to lift Chautauqua to the national stage by continuing to challenge status quo thinking and promote discourse surrounding differences.

“We want to both delight and infuriate every person here,” Hill said. “That is one of my chief concerns.”

PBS President Paula Kerger to discuss new project, the redefining of what is means to be an American