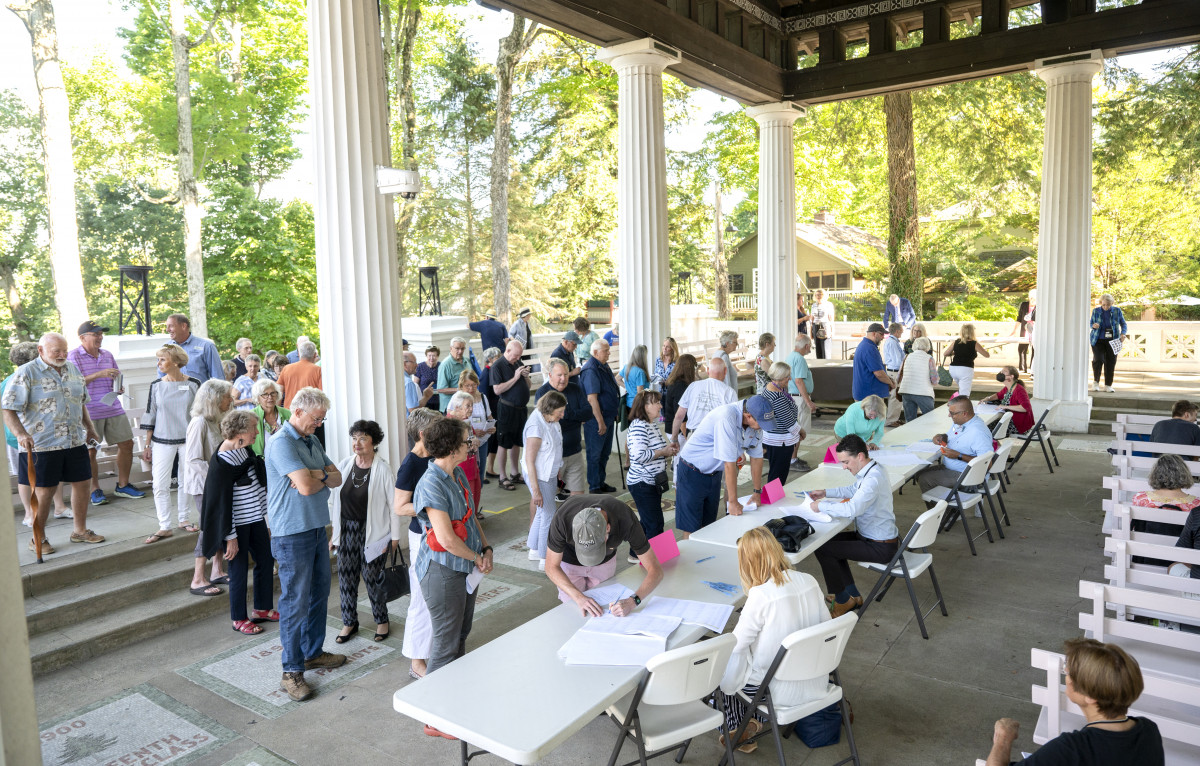 Following a vote by Chautauqua Corporation members last week, Sara Ponkow Falvo was elected as the newest Class B trustee on the Chautauqua Institution Board of Trustees.

The vote took place during the Annual Meeting of the corporation, which followed the Chautauqua Property Owners Association’s Annual Business Meeting and preceded an Institution Leadership Open Forum on Friday in the Hall of Philosophy. The meetings and election were rescheduled from Saturday, Aug. 13, following the Aug. 12 attack on Salman Rusdhie and a pause on Institution programming.

The CPOA meeting included updates on the organization’s financials and progress in outdoor lighting work, and a report from the Institution’s Chautauqua Climate Change Initiative. The meeting opened with an overview of the CPOA’s Class B trustee nomination process. Vice President Mary Henderson introduced Falvo as the CPOA’s 2022 nominee and explained the process behind her selection. The organization nominates one candidate in every Class B trustee election after a vetting process by the CPOA board.

“We interviewed every single person who applied (to be the CPOA’s nominee). It’s very important to us to do that. We want every voice heard. We want to know what is important to all of you, and we want to make sure we don’t miss anyone,” Henderson said. “… We decided on one person, however, and I am sure that you will like her as much as we did.”

“In our by-laws, it states that we must maintain enough for two years of our fixed expenses, which ends up being about $24,000 for both years,” Hood said. “… We are currently operating with a balanced budget.”

Jim Lynch, chair of the CPOA technology committee, discussed the usability of Hivebrite, the platform used to facilitate engagement between CPOA members and to pay annual membership dues. Lynch and CPOA President Erica Higbie conducted a usability survey of the system after implementation.

“Luckily, almost everything that we thought could be changed, the parts were there. They’re just in the wrong place,” Lynch said. “(CPOA technology committee staff member) Zach Andrews and I have started making the changes, and everything is going to be a lot simpler.”

Carolyn Evans, chair of the CPOA membership committee, reported that the CPOA has 720 members, and noted that the Community Activity Fairs held this season Sundays on Bestor Plaza helped the CPOA increase membership. Russ Boehner, community liaison member at-large, offered insights on Chautauqua County’s new tax bracket for properties around the lake — which would generate sustainable income to fund lake projects — and an overview of public utilities.

“Rather than rely on nonprofits to fund the (lake) projects, the county is exploring the idea of creating an ongoing source of county funding by creating a new tax district. Existing law allows taxes to be imposed on those property owners … directly on the lake, or have access to the lake,” Boehner said. “However, since the lake is affected by the entire watershed, the county is also exploring ways to expand the tax district to include the entire watershed. … Inclusion would significantly lower the potential taxes any one property owner could have.”

The biggest challenge in including the entire watershed in the tax bracket is, currently, there are no laws in place to authorize such a large district, which would require the approval of all 14 municipalities in that area, Boehner said.

“These lights have been the subject of the Dark Sky Initiative,” Boehner said. “… As these lights are roughly eight times more efficient than the old lights. CUD customers will see a reduction in their overall charges.”

Mark Wenzler, director of the Chautauqua Climate Change Initiative, joined the CPOA at its meeting to discuss the three pillars of the initiative: programing, work on Chautauqua Lake, and overall operations.

“We want to do this in collaboration with our community as we think through the sustainability measures that we’ll take,” Wenzler said. He noted the “tremendous opportunity” in the Institution’s strategic plan, 150 Forward, to “leverage change for our 150th anniversary. I want to challenge all of you to think about, what does that mean as a property owner? How do you contribute to the sustainable future for Chautauqua?”

“We have five categories that we look at,” Jeffrey said. “Restoration, where you returned the property back to its original state; rehabilitation, where you modernize it, but do it in such a way that is sympathetic to the architecture; compatible infill, which is building new structures that support the character and charm of our community; adaptive reuse, where you take one piece of the building and switch it to something else, but still protecting the architectural integrity of the building; and, finally, stewardship — just maintaining a cottage over time.”

Following the business meeting and before the Institution Leadership Forum, members of the Chautauqua Corporation cast their ballots for the Class B trustee position. Chautauqua Institution Board of Trustees Chairman Candace Maxwell outlined parameters: In order to be eligible for election as a Class B trustee, an individual must be the owner, verifiable by ID, of a property located within the grounds and comply with the requirements of the 2014 amendments to the New York State, not-for-profit corporation laws. Additionally, an individual nominee must, prior to their election, complete the Institution’s conflict of interest policy and related party transaction policy certifications. The CPOA candidate Falvo received 131 votes while self-nominated candidate James R. Zuegel received three.

“It’s important to note that the Foundation continues to be the holders of those endowment assets, and remains a separate entity with a separate board from Chautauqua Institution,” said Institution Executive Vice President Sebastian Baggiano. “Nothing has changed in that regard, just the method of the Institution itself, being the accounting principles and adoption of that accounting treatment.”

Chautauqua Institution President Michael E. Hill opened the Leadership Forum by reflecting on the past week and the aftermath of the Rushdie attack that sent the lauded writer to the hospital with serious injuries, canceled programming on Aug. 12 and Aug. 13, and saw heightened on-grounds security. In preparation for the 2023 season, Hill said he anticipates conversations on security among staff and community.

During the Q-and-A session, Hill declined to answer any questions regarding security as the criminal investigation was ongoing, and did not want to prematurely unveil details regarding future security planning.

“The one thing that’s really certain is that the events of the last many days have changed the profile of Chautauqua Institution. More people know about it, more people are watching it,” Hill said. “Certainly the speakers and preachers and artists that have been coming to our venues over the coming days don’t know Chautauqua as well as you do, and have been asking us to take appropriate measures to give them some additional comfort.”