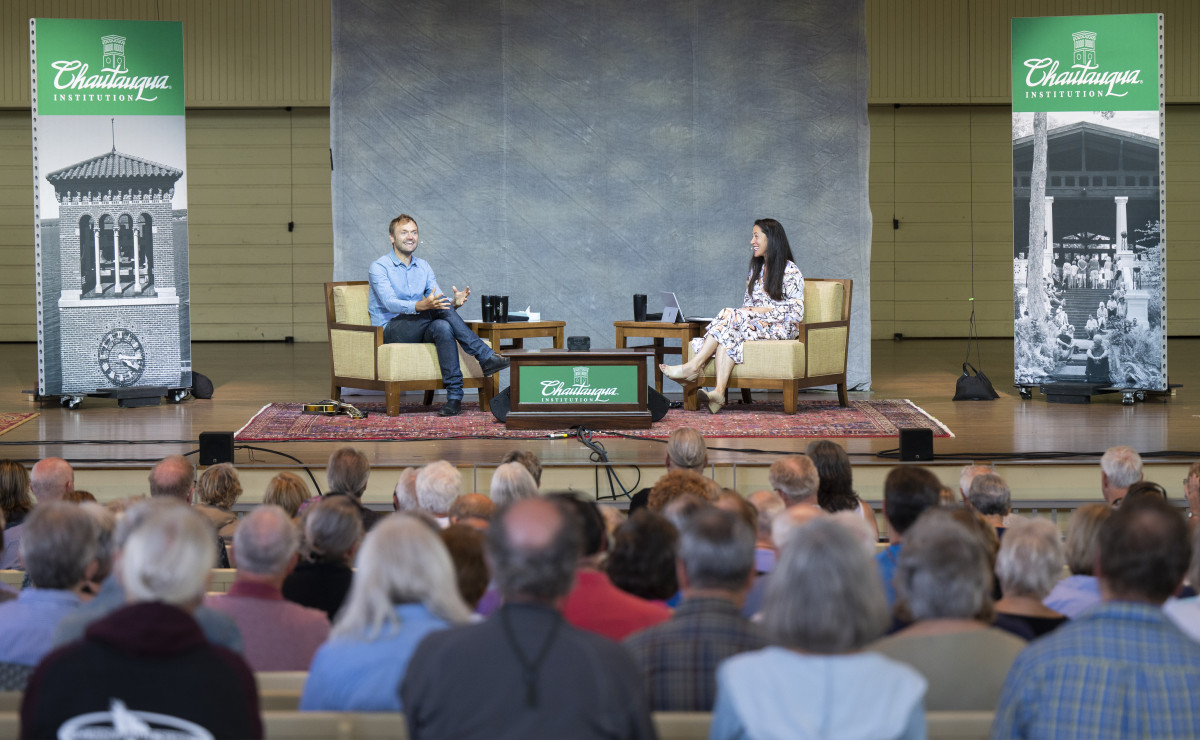 As a two-time Grammy Award-winning musician, it only made sense for Chris Thile to step onto the stage of the Amphitheater for his lecture with mandolin in hand.

In a lecture that was a mixture of music and conversation, Thile performed four songs interspersed with dialogue between he and Senior Vice President and Chief Program Officer Deborah Sunya Moore Tuesday morning as part of Week Nine’s Chautauqua Lecture Series “A Vibrant Tapestry: Exploring Creativity, Culture and Faith with Smithsonian Folklife Festival.”

Thile and Moore discussed the sacred and the secular and how Thile dances between the two.

He opened the lecture with “Laysong,” from his album of the same name, which served as an introduction. The song plays with the idea of coming to rest for a moment, and recognizing that life all around that moment is difficult.

“O but then what shall we sing now? / Tell us / Now as we gather together / With a hard week going / And a hard week coming / To take our breath,” Thile sang.

The song ends with a plea: “Laysong / Be our breather / Bring us together / Help us remember / Those with no breath left to sing.”

Thile grew up in organized religion, and he often explores that background through his music. “Laysong” stems from the idea of lay people in the church.

While Thile is no longer an active member of a particular denomination, he misses the community aspect of coming together with others. This, he said, is something at which Chautauqua excels.

“You have a summer-long communion here, which is just — I envy it,” he said. “And that’s not a thing I’m supposed to do.”

Moore noted how “Laysong” provided an introduction in the communion of the lecture, and asked Thile what the song means to him.

For Thile’s podcast, “Live from Here,” he would write a new song to follow the theme song every week.

“The deeper I got into my tenure as a radio host, the crazier the world got,” he said. “I had this sense when I was writing (‘Laysong’) of a profound need for communion that my current belief system maybe doesn’t plunge me into the middle of the way that my former belief systems did.”

Thile described himself as drifting from the shores of religion, and during his drifting, he cut off many aspects of religion that he now regrets a bit.

Thile needed a song about drawing together, which was something he desperately missed, leading him to write “Laysong.” He sees this as a pattern in his songwriting, that the songs he needs most often do not currently exist.

“So then I need to make it,” he said. “There becomes a very specific song-shaped void that I start hearing in my head.”

While he misses being a part of a congregation, Thile couldn’t help but remember his time at Grace Cathedral in San Francisco and its organ, its choir and the pastor who reminded Thile of Gandalf, in both appearance and speech.

“I was thinking of how it felt to walk through those doors and smell that good Episcopal incense and (to be) transported away from me, from self, to anywhere else,” he said. “Even as I was starting to feel like the more I traveled, the more the religion of my youth felt overly dogmatic, I still yearned for that invitation away from self into something else.”

Missing this reminded him of laymen, he said, who are “in the Church, but not of it.”

“There’s often a rather large wall built between the secular and the sacred,” Thile said.

But music knocks down that wall. For Thile, music — specifically folk music — lets him explore the mixing and the in-between of what is traditionally secular or sacred.

Moore then asked about his song “Ecclesiastes,” also from the album Laysongs. “Ecclesiastes” is instrumental and a direct nod to Ecclesiastes 2:4. In the New International Version of the Bible, it reads: “A person can do nothing better than to eat and drink and find satisfaction in their own toil. This too, I see, is from the hand of God.”

The fact that the song is instrumental led Moore to ask what it means when the listener does not get lyrics.

To Thile, instrumental music gets to be abstract in a way that vocals cannot, even though vocals are not always perfectly transparent either.

“If clarity and specificity was the goal, then we should just talk about it,” he said. “Music puts this beautiful veil between you and the specific meaning.”

He compares the arts to building with blocks that have very loose instructions. When someone has a Lego kit with very specific instructions, putting something together is not as gratifying as when one creates something with no instructions, Thile feels.

“I feel like that’s what art is for, as opposed to an aesthetic or a lecture,” he said. “What we’re trying to do as artists … (is say) ‘Here are some blocks to build whatever it is you need to build right now.’ ”

The blocks, in the case of “Ecclesiastes,” are only instrumental, so people are left to build and imagine with what Thile provides.

“Instrumental music is glorious and abstract,” he said.

When Thile did his soundcheck before the lecture, he played one of Bach’s preludes. Bach once said that “the aim and final end of all music should be none other than the glory of God and the refreshment of the soul.”

Thile disagrees. Composers can make music with no intention of doing it for the glory of God — but people can still interpret it that way. That is the beauty of instrumental music.

With that, he played “Ecclesiastes” on his mandolin, using his feet as a bass that reverberated through the Amp.

After “Ecclesiastes” and the applause that followed, Moore asked about Thile’s move from “a more fundamental background … to being more agnostic.”

Thile made sure to clarify he is a noncommittal agnostic. To him, agnostics believe that the existence of God could either be proven or disproven, but Thile is not sure either way.

Moore acknowledged that his experience, in many ways, fits into Chautauqua’s experience.

“Having just left the stage was a (worship) service. So we try to be very intentional in this living room and space about welcoming people of all and no faith,” she said.

For “Ecclesiastes” in particular, Thile pored over the Biblical text because he appreciates the candor of the narrator throughout.

“I really enjoy the honesty and sincerity that is pouring out of every word in that book of the Bible,” he said. “I find the lack of answers so inspiring.”

He remembered that while chapters in Ecclesiastes explore how everything is meaningless or full of vanity, there are “pockets of joy” throughout the text.

“There are little moments where the author finds meaning and satisfaction,” he said.

Thile knows his Scripture, but Moore also pointed out that, through his songwriting, Thile has interacted with British writer and theologian C.S. Lewis, specifically the novel The Screwtape Letters, which consists of letters between the demons Screwtape and Wormwood. Lewis “intercepted” and presented these letters in his novel. Screwtape gives Wormwood advice on how to cause the most corruption and how to best lead people astray.

Thile reflected those ideas in parts one, two, and three of his songs “Salt (in the Wounds) of the Earth.” The trio is Thile’s exploration of what those demons might be up to now.

Thile segued from the three parts of his song to his idea of three corruptions: dogmatic religion, demonizing of religion and agnosticism.

“(At the end) we don’t really get to tighten things up in a neat, tight little package,” he said.

The cycle of the three parts begins and ends with the laughter of the demons and the question: “And we savor your damnation with our Lord below / Whatcha gonna do?”

Straying from the traditional lecture format of closing with questions, the Q-and-A portion came before Thile’s final song, “Won’t You Come and Sing for Me.”

For this song, he dabbles in the realm of the sacred and a church he remembers.

“Sing those hymns we sang together / In that plain little church with the benches all worn,” he sang. “How dear to my heart how precious the moments / We stood shaking hands and singing a song.”