When Melinda Walcott moved from England to Connecticut over 30 years ago, her new garden consisted of nothing but 18th-century stone walls. She started with top soil and developed her own English garden.

A few years ago, she left that English garden she’d worked so hard to create for an in-law’s property in California, where she had two acres of gopher-ridden hillside to start from scratch.

“England is the proper place for English gardens,” Walcott said. “You do the best you can with what you have elsewhere.”

Walcott, a National Garden Club Flower Show judge and award-winning oral designer will deliver Bird, Tree & Garden Club’s opening Brown Bag lecture at 12:15 p.m. Tuesday, June 26, in Smith Wilkes Hall. Walcott’s lecture will focus on English gardens and the people who designed them from the 18th to the 21st century.

Walcott developed her interest in design after years of living in England, Italy and Singapore. Her garden in Connecticut, surrounded by herbaceous hedge borders, was closely modeled on those she studied in England.

Walcott said her lecture will provide background and information on some of the gardens being previewed in BTG’s biennial House & Garden Tour.

“With the House & Garden Tour, hopefully, with a little background, it will shape people’s eye in what to look for in a garden, what makes them special,” Walcott said. “If the owner of the garden is there, some of the questions they should ask.”

Another aspect of gardening Walcott said she hopes to touch on is the topic of native species, which has been a big push on the Institution grounds in recent years.

“The advocacy and protection and conservation of these grounds, that’s right there in our 104-year-old charter,” said Angela James, BTG president. “Melinda is a dynamite speaker with a great delivery style, and we think it’s a great way to start the season.” 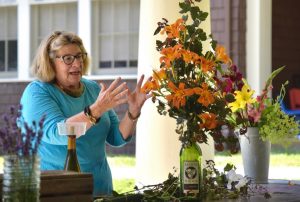 “You don’t have to come back and plant every year,” Walcott said. “They’re happy if you plant them well and you can integrate them with non-natives for a very nice effect.”

Ultimately, it boils down to what you’re most interested in having your garden accomplish, Walcott said.

Hopefully, visitors can gain a better sense of what to be “critical” of when first looking at a garden, Walcott said. However, she said gardens are meant to be “oohed and ahed” over because of the sheer time and effort it takes to create them.

Walcott said she is hopeful that lecture attendees leave with a greater understanding and appreciation for the gardens being presented and the practice of gardening itself. She said she doesn’t believe gardens are just something thrown together to decorate a house. Gardens are an interesting process, she said, that mature and develop over time.

“Gardening should be personal,” Walcott said. “People should plant what they love, not what the next person has.”