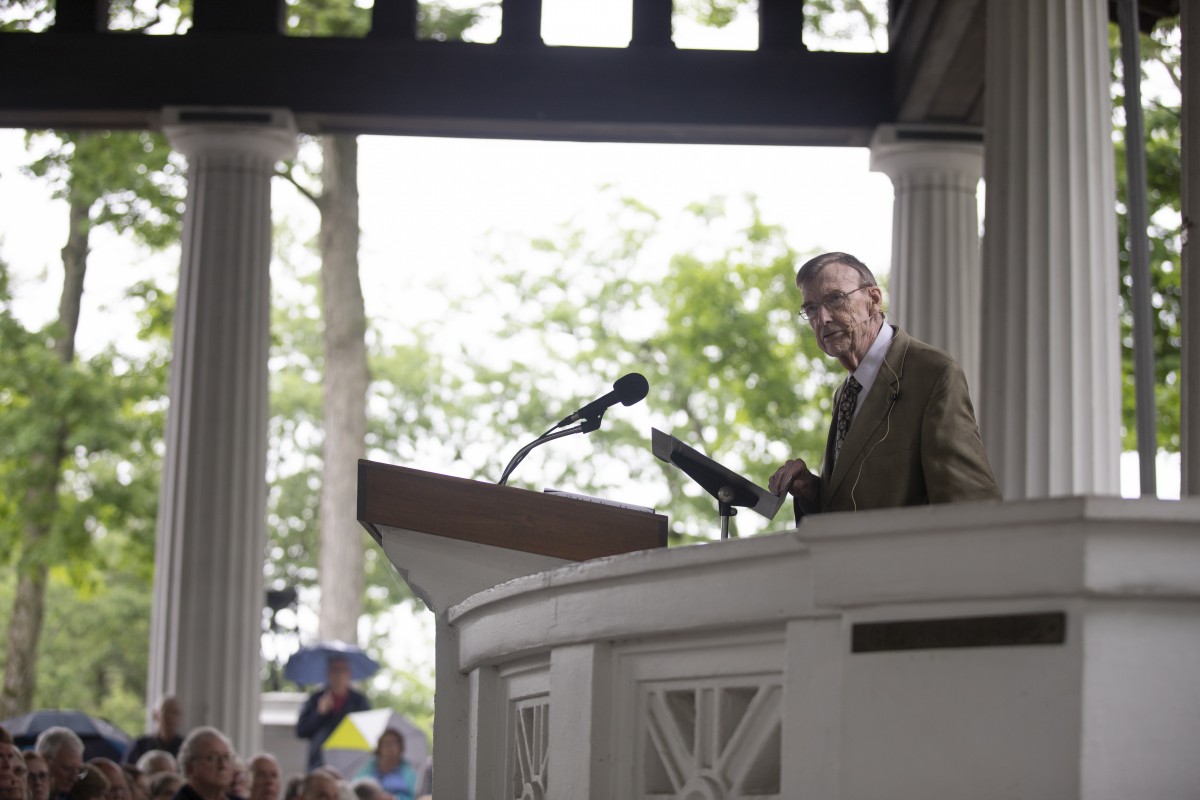 The first two chapters of the book of Genesis tell two contradictory stories about the time life originated in history. In Chapter 1, God created man and woman together, but in the second chapter, Adam is created first, and Eve is created as a result of his loneliness.

Wednesday in the Hall of Philosophy, Spong delivered his third lecture of the week as part of Week One’s interfaith theme, “Producing a Living Faith Today?”

Spong relied on science for his theory on the origin of humans. According to him, the universe began 13.8 billion years ago, and for 10 billion of those years, there were no lifeforms. When life began on earth, it was strictly single-cell and could only reproduce itself. Eventually, those cells combined and life became more complex.

“In that first step from single-cell life to multi-cell life, what was operating was that life was trying to survive,” Spong said.

After this, life divided into two categories: inanimate and animate. On the animate side, cognition developed and so did the curiosity about what was required for something to be classified as “alive.” But Spong does not believe that consciousness derived from a “higher power.”

“There is no evidence of an external source,” Spong said. “It seems that physical matter produced life, and life produced consciousness.”

At first, consciousness was just the ability to relate to one’s environment. But when self-consciousness grew, when a creature related to words such as “I, me and myself,” that was the moment human beings came into existence, he said.

From the moment humans roamed the earth, they possessed a “survival mentality,” and Spong believes the same goes for all life on earth.

He began with the survival of plants. On a trip to Australia, Spong stumbled across a river with mango trees lining each side. The mango tree is a freshwater plant, but the river where these trees stood was a tidal river that salt water seeped into on a daily basis. Spong did not understand how the trees could survive in these circumstances until he noticed the orange leaves floating in the water. Spong was told by his tour guide that these “sacrificial leaves” were one of two ways the mango trees adapted to their environment.

The first was a deep set of roots that would soak in the salt before it could reach the plant. While this helped, this function was still not enough for the plant to thrive. That is where the leaves come in.

“Through means I do not understand and cannot explain, the mango tree designates certain leaves to which the remaining excess salt would be taken,” he said. “They would turn orange, and they would drop off. These leaves had to die for that tree to live.”

Next was a trip through the Amazon rainforest to discuss survival in the world of insects, particularly the nests of wasps and ants. The two nests are in the same tree: the wasp’s nest at the top and the ant’s nest below. The placement is a defense mechanism.

Army ants would eat the larvae in the wasp’s nest, and the wasps, whose only defense were their stingers, had no way of fending them off. However, army ants would not pass the nest of regular ants on the way up a tree, so wasps found their safe haven above.

The favor went both ways.

With the ants at the bottom, their nests could easily be reached by anteaters. Whenever one would approach, the wasps would fend them off with their stings.

“These creatures are not mental giants,” Spong said. “You would think Henry Kissinger had negotiated security for these people, it worked so well. But that’s nature. That’s driving the right to survive deep into nature.”

After that came the survival of the parakeet. The parakeet’s primary food source are fruits of the forest. However, the majority of nutrients from these fruits are in their seeds. The seeds are toxic to the bird, yet birds still eat them. In this case, it took a group of Peruvian scientists to figure out how the parakeets adapted, and it turned out the birds had discovered clay licks: steep walls of red clay caused by erosion along riverbanks which provided them with enough antitoxins to eat the seeds without repercussions.

Spong tied these examples together to explain how the survival instincts of life on every level led Christians to the wrong understanding of what it means to be self-centered.

“We thought that everyone was created whole and perfect and that they then fell into sin and became victims,” he said. “Our ancient ancestors found self-centeredness at the heart of every living thing, including human beings. This was nothing but the survival instinct. If survival is my highest good, then I am going to organize my world with me at the center.”

The church recognized self-centeredness as universal and tried to create a solution. The conclusion was that humans were fallen creatures and needed a religious system so they would overcome that definition of “fallen.”

The problem with the church’s way of ridding people of evil was that they did not realize instincts are biological, not moralistic, and therefore can’t be escaped, Spong said.

Not only does Spong believe humans should not escape those characteristics, he also believes humans are part of what the religion is called to be.

However, self-consciousness is not to be confused with selfishness. In order for the Christian faith to move forward, Spong concluded Christianity must become a religion that is willing and able to come together with the other great religions of the world.

To do so, Spong said Christianity must “accept (other religions) as they are.”

“We must possess the ability to get past self-survival and offer ourselves as whole people in the life of this world. The reformation this religion must undergo is scary, but it is noble,” Spong said. “Even more, it gives the Christian story a chance to live in a new time in history. I pray it will. I pray it can. I believe it must.”