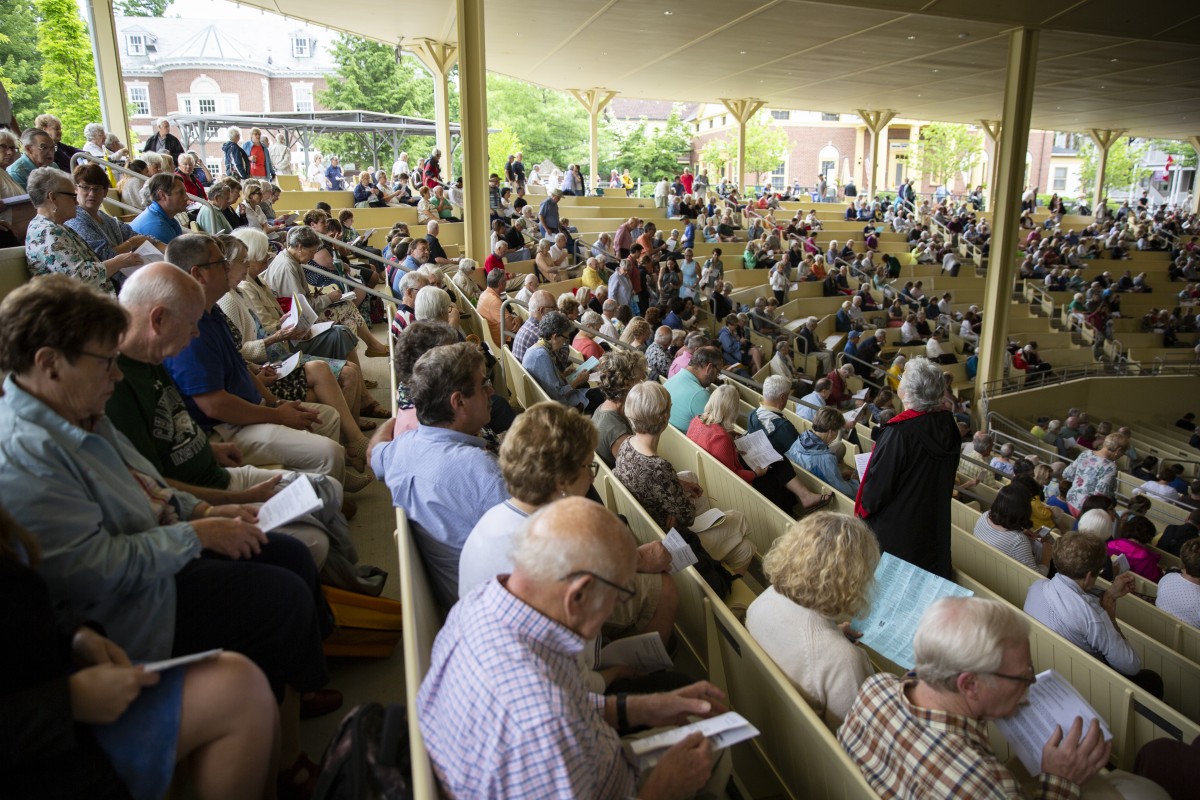 The Samaritan woman was minding her own business, fetching water from the community well as was necessary twice a day.

“What is wrong with this picture?” said the Rev. Karoline M. Lewis at the 9:15 a.m. Tuesday, June 26 morning worship service in the Amphitheater.

She continued her series on Jesus’ encounter with the Samaritan woman at the well. Her sermon title was “When the Well is Deep,” and her text was John 4:7-15.

No one goes to the well at noon, in the heat of the day. People go early in the cool of the morning when the dew is still on the grass or at dusk when the sun has dropped behind the horizon and the heat is waning.

“The Samaritan woman has to go alone, at noon,” Lewis said. “Who wants to be around her? Five husbands? ‘Girlfriend, you have had some bad luck and we don’t want to be around you.’”

The Samaritan woman felt abandoned and shunned. Her empty buckets, Lewis said, would soon be heavy with the weight of the water and the burden of life that left her alone, so very alone.

Jesus finds the woman at the well, and Lewis said he was not at his “Miss Manners best.”

“A sip of water might lead to Jesus telling you your truth,” she said.

Before the woman can admit that Jesus is telling her the truth about herself, she asks Jesus how a Jew could ask her, a Samaritan woman, for a drink.

“She knows her place; no one ever lets her forget it,” Lewis said.

“We make excuses,” Lewis said. “We let God know why he got it wrong, why he doesn’t need us. In seminary, we used to say, ‘Here I am God, send someone else.’ ”

At other times, we misunderstand what God is saying to us, and we are in good company. When Jesus told Nicodemus he had to be born again, Nicodemus wondered how he could go back into his mother’s womb.

“When Jesus offered the woman living water, she said, ‘Sir, I see you don’t have a bucket. Have you looked down? The well is deep, really deep,’” Lewis said. “The well is often deep and the water that quenches thirst is so very often out of reach.”

When we peer down the well, Lewis said, we long for a bucket to reach the bottom, and we wonder if it is worth it to try.

“We are thirsty, desperately so, but our efforts to satisfy our soul seems so far away,” she said.

Wells do dry up, and we have to find a new water source and dig a new well.

“There is no feeling like being tapped out,” Lewis said, “but Jesus is the water that will never dry out. The living water will gush like a fountain, a geyser.”

The Samaritan woman said, “OK, I‘ll take that water. No more schlepping this bucket.” Lewis said that her response may seem naive, another misunderstanding.

“Jesus is not something that you ‘get,’” Lewis said. “Jesus is someone who takes longer to understand and know.”

Lewis said it was no accident that this story is a conversation — a long one.

“If Jesus had just showed up and said ‘Hey, I’m God,’ the story would not be the same,” she said. “The Samaritan woman wonders, maybe Jesus has something else she needs. Jesus has water but also the relationship for which she longs and which she has been denied for so long.”

This was a pivotal moment in the story.

“The Samaritan woman teaches us one key idea — to produce a living faith, just ask,” Lewis said. “It is hard to be vulnerable, it is hard to ask, to put ourselves on the line, to admit that we can’t do it alone, that we don’t want to be alone.”

Yet, being vulnerable is what relationships are all about and a relationship is what God wants so desperately with us.

The Rev. Tara Lamont Eastman, pastor of Tree of Life Evangelical Lutheran Church in Jamestown, presided. Caroline Benton, Chautauqua’s beloved carillonier at the Miller Bell Tower, read the Scripture. The Motet Choir sang “The Eyes of All Wait Upon Thee” by Jean Berger, under the direction of Jared Jacobsen, organist and coordinator of worship and sacred music. The Jackson-Carnahan Memorial Chaplaincy provides support for this week’s services.