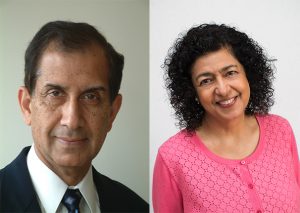 As American Muslims and interfaith activists,  believe they have a duty to educate the world on their religion in order to help refute negative stereotypes.

At 2 p.m. today in the Hall of Philosophy, Khalid and Sabeeha Rehman will discuss the importance of sharing their faith, as well as listening to the history and values of other faiths.

During this season’s first Interfaith Friday, the couple will give a brief overview of their religion and will then engage in dialogue about worldwide religious connection with the Rt. Rev. V. Gene Robinson, Chautauqua’s vice president of religion.

“There’s a tremendous desire on the part of Americans to learn about Islam,” Sabeeha Rehman said. “So I think that given the need and the desire, Chautauqua seems to be the ideal model for this.”

Robinson will pose questions about how religions can exist in harmony and, even better, lift up one another. The Rehmans will answer those questions from an Islamic perspective.

Though Interfaith Fridays are new to Chautauqua, Khalid and Sabeeha Rehman have been proponents of interfaith work for years. They were both born and raised in Pakistan, but moved to Staten Island for their professional careers.

After retiring from his career as an oncologist, Khalid Rehman became a board member of the Muslim Majlis of Staten Island and founder of the Pakistani Cultural Association of Staten Island. Sabeeha Rehman, a former healthcare executive, is the author of Threading My Prayer Rug: One Woman’s Journey from Pakistani Muslim to American Muslim and is a board member of the Muslim-Jewish Solidarity Committee.

The couple first came to Chautauqua in 2012 as part of an initiative to expand Muslim presence on the grounds. In 2016, they proposed the idea for a weeklong “Islam 101” course for Chautauquans.

“The interest was so high that the place was full, and every day they had to turn away people,” Sabeeha Rehman said. “People were anxious to get in, they started lining up hours ahead of time.”

In 2017, the Rehmans expanded the course on the grounds to four weeks. Still, the community wanted more, and Chautauquans reached out to the couple about lecturing at other venues.

“We started getting invitations from all across the nation, particularly around the East Coast,” Khalid Rehman said. “In 2017, we did 111 talks and presentations in about 27 cities.”

As their interfaith work expanded, the Rehmans felt an enhanced connection to other faiths. On and off the grounds, they engaged with other faith traditions by visiting synagogues, attending different church services and sharing meals with local rabbis.

“We are bringing people of different faiths together and trying to share our stories and our faith traditions,” Khalid Rehman said. “There’s a whole lot in common among all of them.” Sabeeha Rehman said religious connection is especially important amid world conflicts. After the

May violence in Gaza over the Israeli-Palestinian conflict, she met with a rabbi to discuss the devastation and the difficult healing process.

“He came over, he sat in our living room, we shared our pain and we prayed together,” she said. “I just feel so moved and so touched by everybody just coming together and helping one another, and it all started with interfaith dialogue.”

The Rehmans have been welcomed into communities across America to share their faith. The challenge, Sabeeha Rehman said, is sharing their faith with those who are not as willing.

“We are preaching to the choir,” she said. “There are many, many places in the United States where we need to be heard, but we are not being given a platform because the will is not there.”

The Rehmans are nonetheless thrilled to share their faith with an attentive audience in this new lecture series.

“It’s such an honor; we are the first lecture for a whole new program,” Khalid Rehman said. “I think it’s wonderful idea. I think the same kind of questions for every faith will create a very rich dialogue.”